As I tweeted the other day, the Virginia Department of Education has already debunked the latest example of Glenn Youngkin being wildly false/dishonest. In this case, Youngkin’s wildly dishonest/false claim was that “Democrats and liberal Terry McAuliffe [are] pushing a radical political agenda in Virginia, including…removing the Pledge of Allegiance and the Fourth of July from curriculum, teaching divisive critical race theory in the classroom.” In fact, as the Virginia Department of Education said in a statement, responding to this latest right-wing-fever-swamp lunacy from Trump/Cruz-endorsed Youngkin:

“There is no proposal or discussion about removing the pledge of allegiance or Independence Day from the K-12 curriculum in Virginia…Again, no one in Virginia is recommending changes to these standards”

See below for the Virginia Department of Education’s full statement. Also, see PolitifactVA, which “fact checked Youngkin’s claims and found no evidence that McAuliffe wants to remove Independence Day and the Pledge of Allegiance from school curriculum or that there is a Democratic agenda to do so.” PolitifactVA adds:

“There are huge problems with Youngkin’s claim. For starters, he has not offered any statement by McAuliffe on teaching about Independence Day and the Pledge. We’re unaware that such a statement exists…Youngkin hasn’t produced any evidence McAuliffe supports such action, and we haven’t found any. Youngkin doesn’t get to create positions for McAuliffe…

Moreover, there’s no evidence of a Democratic agenda to limit teaching about the Fourth and the Pledge. A commission seeking to broaden instruction about Black participation in American history recommended removing a reference to the Pledge and the Fourth from one subsection of state learning standards.

Youngkin ignores that the state Board of Education did not adopt that recommendation. Even if the Board had approved it, other sections of the standards would still require teaching about the Fourth  and the Pledge. And he ignores that – beyond the Board’s purview – state law requires students to learn the Pledge.

In short, if Youngkin’s lips are moving, you should just assume he’s lying. On any subject. Seriously, just as with his heroes Trump and Cruz, we should all (journalists, voters, etc.) start from the assumption that Youngkin is NOT telling the truth, and proceed from there. 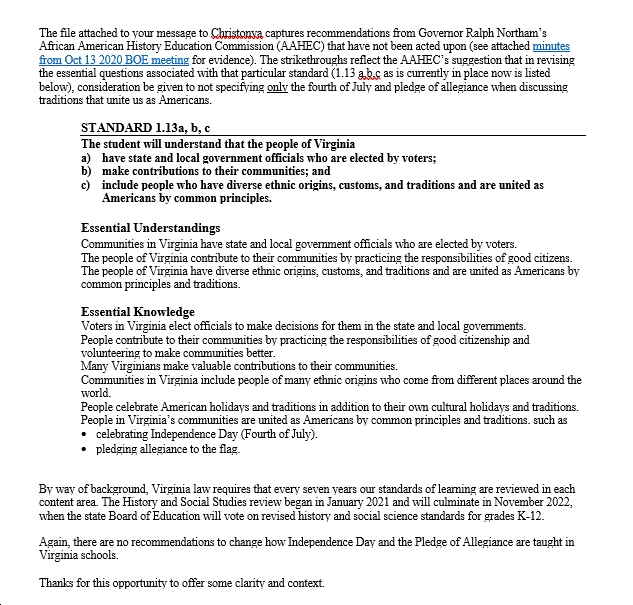 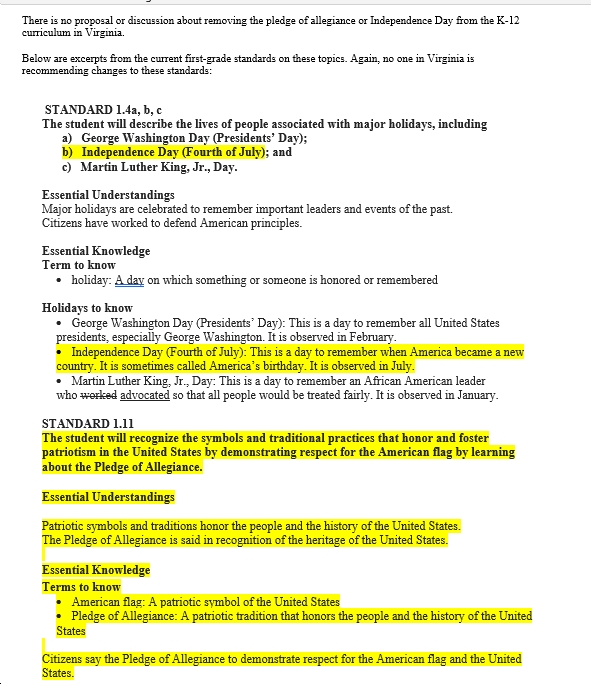 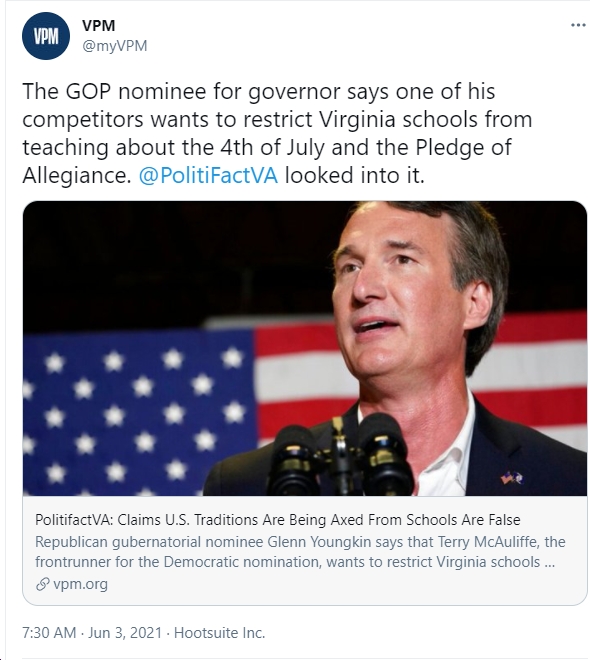 Meanwhile, why on earth do Dems keep going on right-wing media, such as Sinclair-owned WJLA TV7 in the DC/NoVA area? Hint: right-wing media does NOT operate in good faith, they lie constantly, etc. Just tell them to f*** off! https://bluevirginia.us/2021/10/video-morning-joe-says-glenn-youngkin-is-scared-to-come-on-the-show-offers-to-moderate-debate-terry-mcauliffe-says-yes-anytime-anywhere#comment-5577879915 h/t @Jaaavis @Renzo_Olivari