Yet another piece of evidence that Glenn Youngkin is an extremist…the fact that he believes Stephen Moore (!) of all people is “the best senior economic advisor on the planet.” 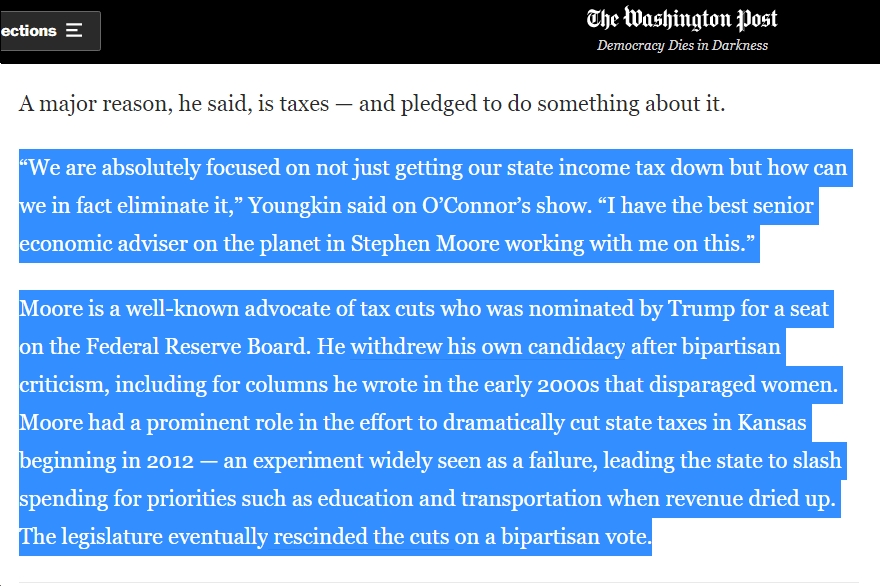 Also, re: Moore’s role in the Kansas budgetary disaster, see Trump’s pick for Federal Reserve had hand in creation of Brownback tax ‘experiment’, which explains, “President Trump’s likely nominee for the Federal Reserve’s board of governors helped shape the deep tax cuts that were blamed for years of budget shortfalls under former Gov. Sam Brownback.” The result?

Kansas consistently lagged the national average in job growth after implementing the tax cuts. When Kansas lawmakers overrode Brownback’s veto to repeal the policy in 2017, Kansas was one of only four states that had lost private sector jobs over the previous 12 months

The bipartisan override came after four straight years of budget shortfalls that required cuts to higher education, Medicaid, and other state services.

In short, Moore’s economic plan for Kansas led to budgetary and economic disaster. Needless to say, this is literally the LAST thing we need here in Virginia!

Any further questions? Because...nope, before 1/6/21, "there had never been a violent attempt to overthrow an American election" (and American democracy). Trump did that and MUST BE held to account! https://bluevirginia.us/2022/08/virginia-republicans-react-to-fbi-search-of-mar-a-lago-exactly-as-wed-expect-disgracefully-hypocritically-and-with-zero-respect-for-the-rule-of-law#comment-5942738280 h/t @WalshFreedom