On any list of the worst members of Congress, you’ve got to put Rep. Thomas Massie (R) of Kentucky. This is a guy, after all, who was one of four Representatives who voted *against* making LYNCHING a federal hate crime! He also voted against the Violence Against Women Act; voted against giving medals to law enforcement heroes who risked their lives during the 1/6 insurrection; issued a bizarre statement on January 3 (just three days before the 1/6 insurrection) “concerning the January 6 attempt to overturn the results of the election” (WTF??); etc. In general, Massie’s a nightmare on the issues; for instance, he “rejects the scientific consensus on climate change“; “was the sole member of the House of Representatives to vote against a condemnation of the treatment of Uyghurs in China”; “was the sole member of the United States Congress to vote against the Hong Kong Human Rights and Democracy Act”; etc.

Anyway, as you can see, Massie’s an extremist, wacko, buffoon, and whatever additional pejorative adjectives you want to use. And now…yep, he’s gone and made a complete fool of himself yet AGAIN.

“Kentucky congressman Thomas Massie found himself on the receiving end of a lesson in military protocol on Monday morning, after suggesting that active-duty members can simply ‘quit.’

On Saturday, the GOP representative posted that he had been in touch with members of the military who were considering “quitting” if they were forced to get a COVID vaccine, which so far has largely proven safe.

‘I’ve been contacted by members of our voluntary military who say they will quit if the COVID vaccine is mandated.‘ Massie tweeted. ‘I introduced HR 3860 to prohibit any mandatory requirement that a member of the Armed Forces receive a vaccination against COVID-19. It now has 24 sponsors.’”

So, obviously, this is wrong in just about every way conceivable. For instance, as former Rep. Denver Riggleman (R-VA05) points out (see screenshot, below):

“They can’t just quit. That’s the whole oath to the constitution, service contracts and all that.

Military personnel are mandated to receive many vaccinations., I was jabbed dozens of times. Sick military members affect readiness. Death doesn’t help either.”

“So much wrong with this tweet even beyond how naive it is; 1) sorry, but you can’t quit the military. 2) there are about 3890 mandatory vaccines in the military already, 3) you knew this when you joined. 4) THE VACCINE WORKS. Good luck with your pandering though.”

In short, Massie is encouraging “U.S. military members to go AWOL,” which is illegal and pretty much as un-American as you can get. So…given all that, nobody in their right mind would actually chime in to *support* Massie on this, right?!?

Well…uh…have you heard of extremist, insurrectionist nutter Bob Good, who “represents” (in air quotes) VA05 in the U.S. House? That guy’s actually a *co-sponsor* of Massie’s legislation (HR3860) “to prohibit any mandatory requirement that a member of the Armed Forces receive a vaccination against COVID-19!” Bonkers, eh? Oh, and then there’s our old pal Nick Freitas (R) – the 2020 Republican nominee for Congress in VA07, who thankfully lost to Rep. Abigail Spanberger (D)…although disturbingly, not by much – who retweeted one of Massie’s tweets defending his FUBAR bill. Disgusting. 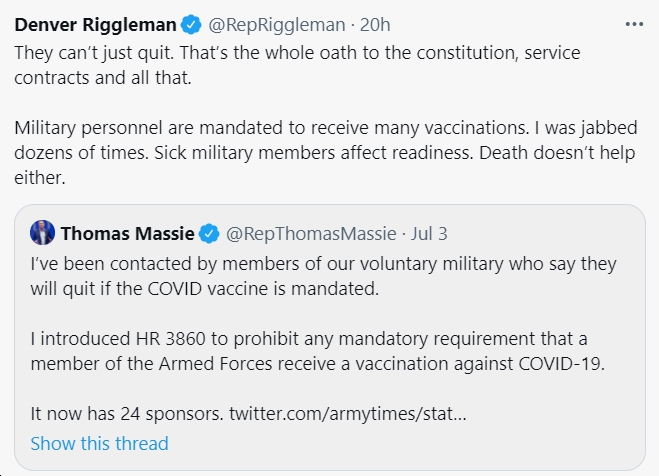 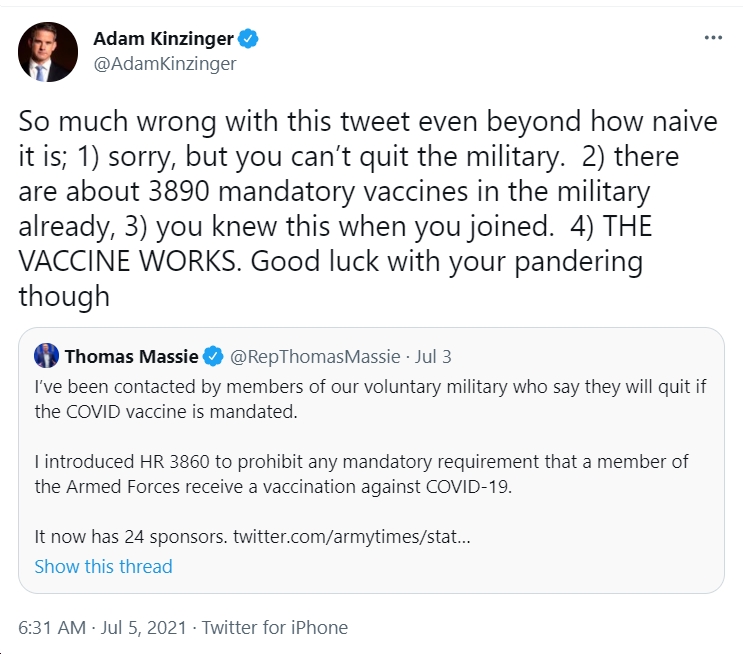 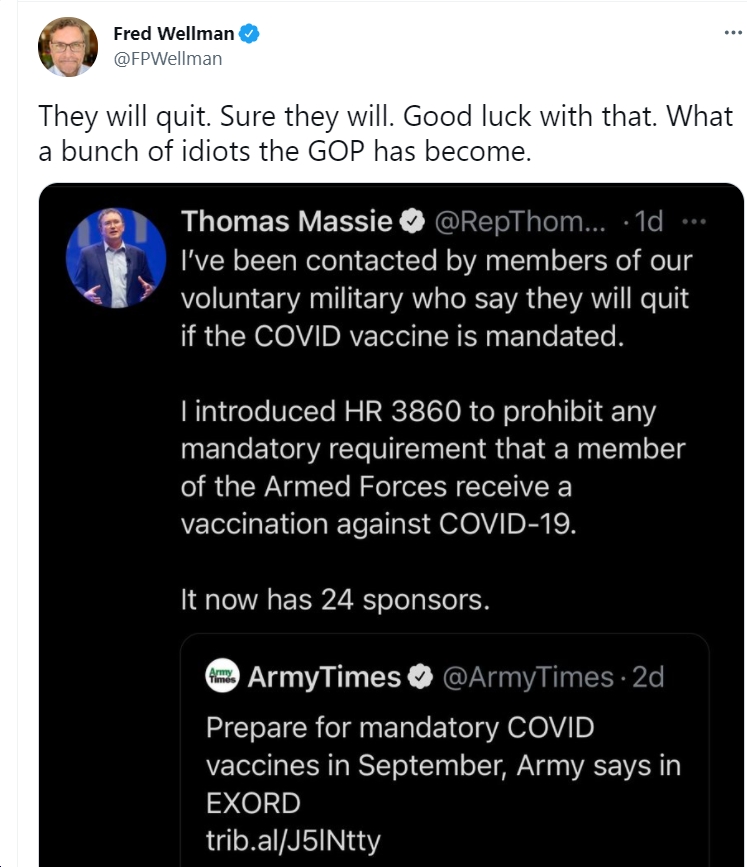 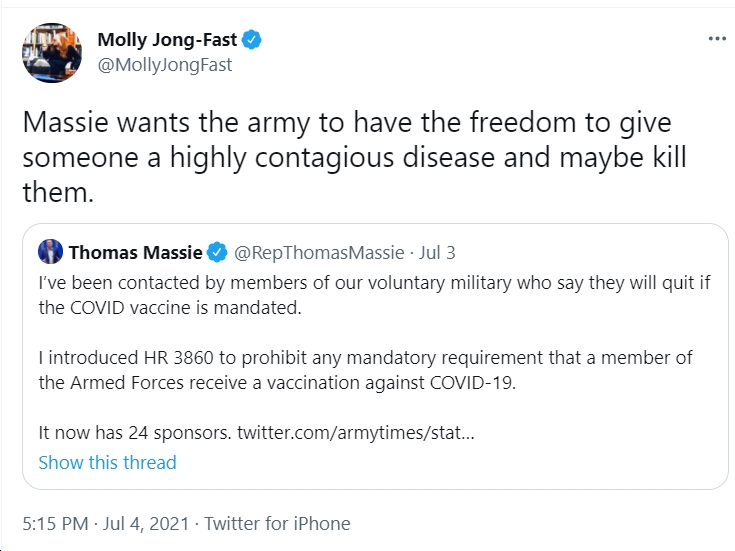 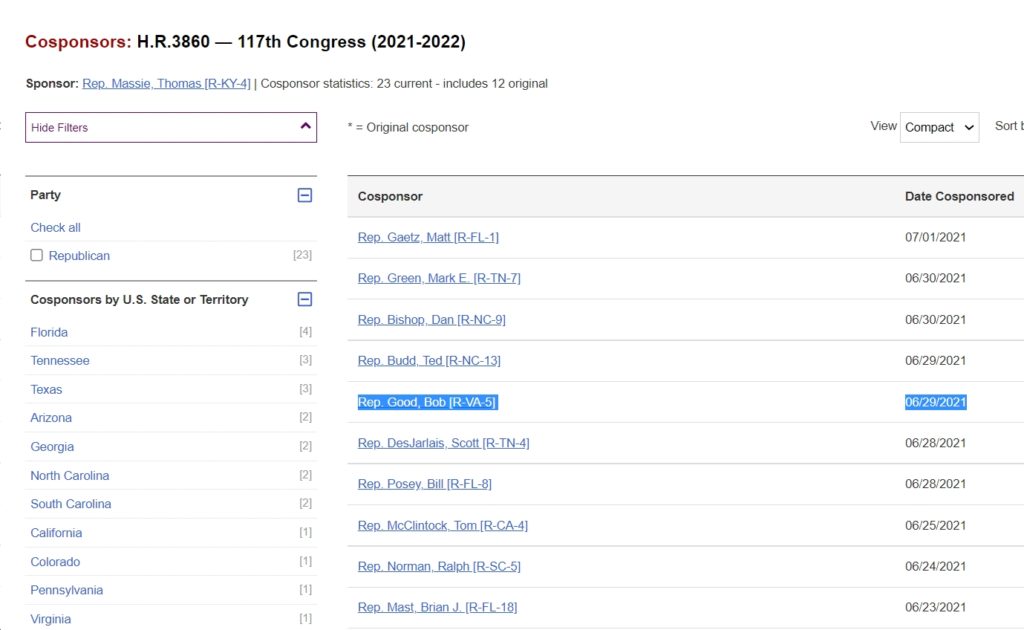 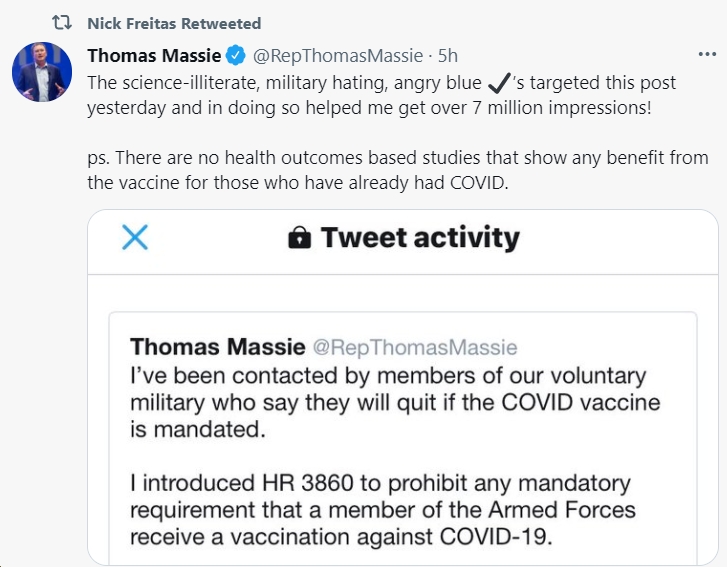