“One of America’s first sit-ins took place at Alexandria Library…On August 21, 1939, Alexandria Library staff and patrons watched as a young African American entered and asked to register for a library card. When he was refused, he picked up a book, took a seat, and began to read. Minutes later, another well-groomed and polite young adult repeated these actions. This continued until William Evans, Otto L. Tucker (the attorney’s brother), Edward Gaddis, Morris Murray and Clarence Strange occupied five tables. Each one sat in silence and read a book.

Flustered library staff called the police. As planned, Robert Strange (his older brother Clarence was one of the silent protestors) ran to Tucker’s law office to let him know that the police were on their way. Officers arrived and escorted the protestors from the library, arresting them for ‘disorderly conduct.’ Samuel Tucker had called a photographer, who took a photo, and then quickly arranged for their release. He planned to challenge the city in court on the grounds that all citizens were entitled to equal access to public services. But the city, in an effort to resist integration, stalled the process with intense negotiations.” 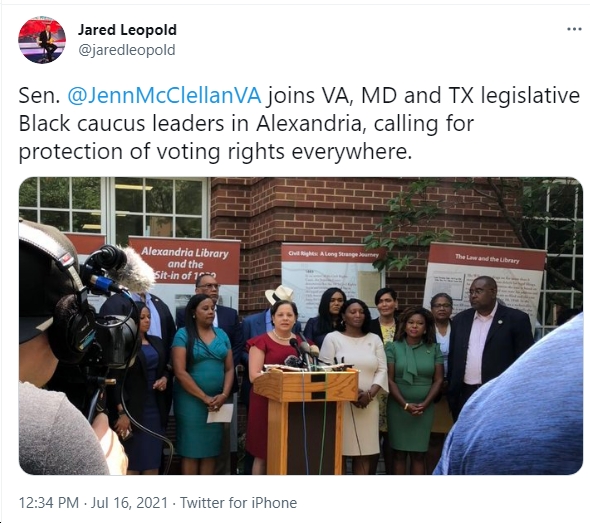 Welcoming the @VaBlackCaucus, @MDBLACKCAUCUS and the @txblackcaucus and the ongoing fight to enhance access to voting and protect the right to vote to Alexandria! 🗳 pic.twitter.com/0P2VTcjDQX

We are fighting for the soul of Texas and this nation.  Democracy hangs by a thread.  SB 1 and HB 3 would strip the freedom to vote from our communities by creating deliberate barriers to voting. These bills are written in the spirit of old Jim Crow laws and would dismantle the progress towards making us a more perfect union. The constituents of Senate District 13 elected me to fight to protect their rights and that is why I am here in Washington D.C. We cannot let any government roll back the rights of the disenfranchised, marginalized and voiceless.

“Members from The Texas Legislative Black Caucus stand with our legislative colleagues to preserve the right to vote. Our ability to participate in free and fair elections are on the line and without federal intervention, we will continue to see efforts to chip away at our protected right to vote.”

“Virginia, just like the rest of our country, has a long history of Jim Crow voter suppression laws and tactics that denied the right to vote for Black and Brown people. The 1965 Voting Rights Act helped address many of those issues but over the past decade we’ve seen the U.S. Supreme Court gut and weaken that federal law. That is why our caucus and our democratic colleagues in the Virginia General Assembly worked to protect the right to vote at the state level. Most notably we recently passed the Voting Rights Act of Virginia, which helps to make the fundamental right to vote easier and guards against any future voter suppression tactics and discriminatory practices. This law was championed by VLBC Vice Chair Sen. Jennifer McClellan and VLBC member Del. Marcia Price. The act is modeled after the federal Voting Rights Act and takes Virginia in a new direction from its past history: actively fighting against voter suppression rather than enabling it. But the work doesn’t end here. Not only should other states begin to adopt similar voting protections, but we need reform at the federal level — we need a new federal voting rights act to be passed in order to guarantee the fundamental right to vote and combat voter suppression nationwide.”

“When it comes to our elections, all voters deserve equal freedom to vote, whether they live in a small town or big city, the south or the north. While some legislators across the nation have erected deliberate barriers to silence diverse voices, Maryland passed robust legislation this year to expand the freedom to vote. Our legislative victories this session create safe and accessible elections for all, including creating a permanent mail-in voting list, making drop-boxes permanent and equitable, increasing early voting sites and hours, guaranteeing voting access for eligible incarcerated individuals, and expanding voting for student and military voters. The Legislative Black Caucus of Maryland, Inc. stands with the Virginia Legislative Black Caucus, Texas Legislative Black Caucus, and Texas Democrats and urges all legislators to end attacks on voting, and, instead, champion legislation that allows everyone to cast ballots freely, safely, and equally.”

The historic Kate Waller Barrett Branch Library was the site of the 1939 Alexandria Library sit-in, when five Black men were arrested for attempting to register for a library card.