It’s absolutely crucial to pass legislation protecting our democracy (“The new legislation, unveiled Tuesday morning by Minnesota Democratic Sen. Amy Klobuchar and several cosponsors, builds off a framework proposed by West Virginia Sen. Joe Manchin, who had opposed an earlier, sweeping measure from his party.”), as Sen. Tim Kaine and Rep. Gerry Connolly explain (see below). Of course, that almost certainly means modifying the filibuster to allow for “democracy reconciliation,” as Mel Barnes, Norman Eisen, Jeffrey A. Mandell, and Norman Ornstein of the Brookings Institute call it.

“In Part III, we advocate for one additional option that the authors have previously written about, and that has been getting some significant proponents of late. We term that approach “democracy reconciliation.”[11]It is based upon the existing practice of budget reconciliation, which allows certain fiscal measures to have an up-or-down simple majority vote.[12] As we explain, we would craft a similar exception for voting measures, allowing them a similar opportunity to be voted upon by a majority. Reconciliation operates on a key principle known as the Byrd Rule, named after the late West Virginia Senator Robert Byrd.[13] Because the current fate of the filibuster swirls around his successor, Senator Manchin, one may refer to this hoped-for new compromise of democracy reconciliation as ‘the Byrd-Manchin’ Rule.”

Or as Rep. Gerry Connolly explains: “I am a child of the civil rights era. I did not run for office to witness a reversion to Jim Crow in America. The Senate should abolish the filibuster altogether. If they won’t, they must implement a carveout for voting rights legislation. Democracy is at stake.”

And last but not least, here’s Sen. Tim Kaine:

“Today I’m joining my colleagues to introduce the Freedom to Vote Act—legislation that will ensure eligible voters across the country get access to the ballot. We must protect the right to vote and strengthen our democracy, and this is a critical step forward in that fight.

I was a civil rights lawyer for 17 years, lived through a violent attack on the Capitol by people wanting to overturn an election, and am watching state legislatures scheme to reduce the ability to vote. The right to vote is the cornerstone of our democracy—we must protect it.

We have said for months that we won’t give up on this issue because it lies at the very heart of our American values. I’m proud to have worked with many of my colleagues on this critical legislation—now let’s go get it passed.”

I am a child of the civil rights era. I did not run for office to witness a reversion to Jim Crow in America.

The Senate should abolish the filibuster altogether. If they won't, they must implement a carveout for voting rights legislation.

Democracy is at stake. pic.twitter.com/l9B78lQ64U 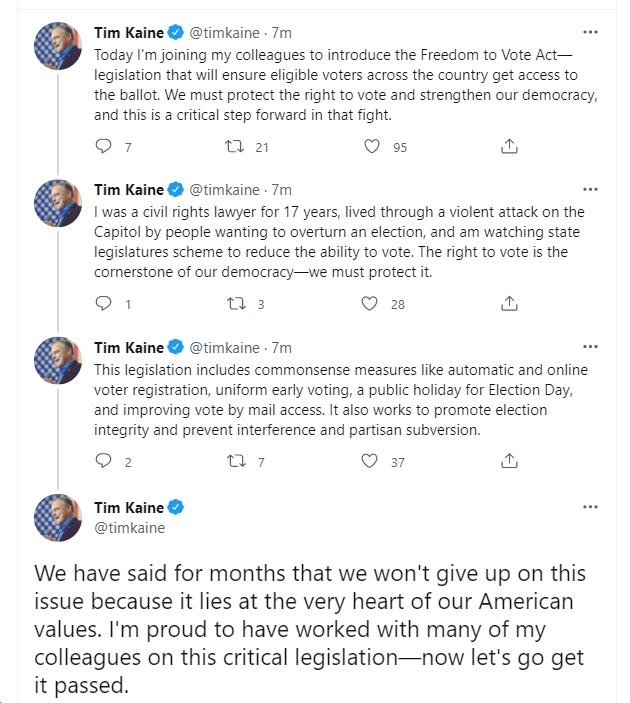