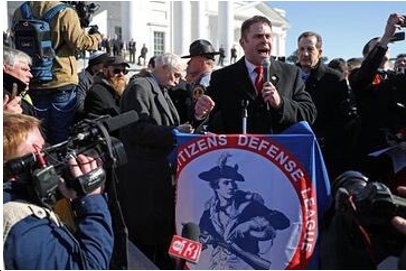 Del. Nick Freitas (R-HD30) staunchly defends individual rights and autonomy – for men, at least; women not so much. Freitas’s anti-choice position does not include exceptions, even for rape and incest.  In fact, Freitas refers to abortions performed for any reason other than to save the woman’s life as “abortions of convenience.”  Gun owners, though, are a different story: for them, there are plenty of rights to go around.  Freitas advocates for the Second Amendment primarily on the grounds that it’s needed to defend against tyranny, but he’s not foolish enough to suggest that the local militias who hang onto his every word would stand any sort of chance against the US military. No, he confines his allegations of tyranny to democratically elected politicians, and he has crossed the line of civil discourse on more than one occasion, such as when he threatened Beto O’Rourke. 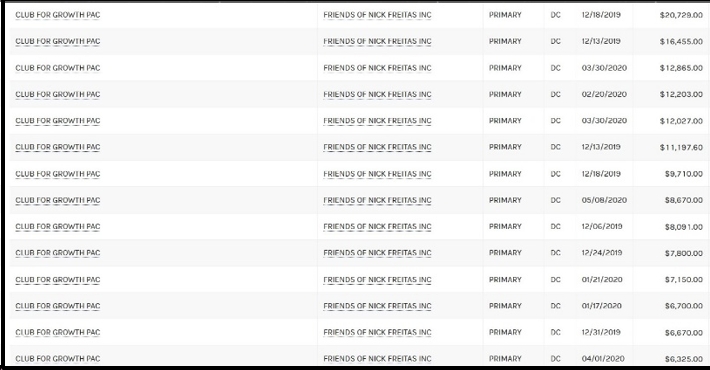 You might think, then, that when asked about objectionable legislation in the 2020 session, Freitas would zero in on the raft of pro-choice and gun control bills that the new Democratic majority had passed.  And there you would be wrong.  Because while Freitas panders to the anti-government, anti-corporatist Tea Party crowd, he in fact is the pawn of such big-money power brokers as Dick Uihlein, who shored up Freitas’s write-in campaign with a tidy $500,000; and the Club for Growth, which helped recruit Freitas to run for Congress against Abigail Spanberger and donated heavily to him.

This brief clip shows without a doubt that Freitas is working for big corporate interests and not for the average American:  Freitas declares that one of the worst bills of the 2020 session was raising the minimum wage to $15/hour.  That’s right, one of the bills that most benefitted workers was one of the worst bills, in Freitas’ view.

Freitas says frequently in his campaign speeches that just a few percent of workers are paid the minimum wage and that most of them are teenagers or young adults just starting in on the job market.  Surely, Freitas understands that if the minimum wage were raised to $15/hour, it would raise the wages of all low-wage workers currently earning less than $15/hour. Some of them, in fact, actually earn less than the minimum wage because they survive on tips or are the victims of wage theft.  For Freitas to state that only those would gain who are earning precisely the current minimum wage is ludicrous at best and deceptive at worst.

And who are the low-wage workers who would benefit from a minimum wage hike?  Are they really all teenagers and young adults just getting a start?  Wrong again.  Among the startling data: half are over 30, 10% are over 60, most earn half their family’s income.  More than half are women (and disproportionately women of color); 40% of the Black workforce are low-wage earners; 15,000,000 of the nation’s children have parents who are low-wage workers and so live in poverty.  Furthermore, those currently earning just above the minimum wage are also likely to see a bump in their wages.  In total, roughly 32,000,000 American workers would have their lives improved by raising the minimum wage to $15/hour.  Employers, too, are likely to find that they suffer less turnover and enjoy greater productivity, and it is worth noting that 61% of small business owners nationwide support raising the minimum wage.

But those are national figures.  Here in Virginia, over 20% of the workforce – more than 1 out of 5 workers – will gain from the increase in the minimum wage that Freitas considers to be the worst bill passed in 2020.  But then, Nick Freitas isn’t looking out for American workers – he’s looking out for himself and the big corporate interests that feather his nest.