I went to the Stafford County Government Center to vote early on Saturday. As I was walking towards the doors to enter the building, a young man, who seemed about high school age, asked me if I wanted to sign a Republican petition to demand that Stafford County teach “historical fact” as opposed to “political ideology.” He seemed very proud of himself participating in defending the “sanctity” of public education. I brusquely, but politely, said “no,” walked into the polls, and voted the straight Democratic ticket.

As I left the building, I stopped to talk with some of my friends. Marc Broklawski, the husband of a public-school educator and proud parent of public school-educated children, was standing nearby urging folks to vote for him for Hartwood School Board Member. Clayton Hill, the Stafford County Democratic Committee’s Precinct Operations Chair, was busy at work handing out sample ballots, coordinating volunteers for election day, and clearing some administrative matters with me that needed sorting out. But this young man and his petition kept breaking my concentration.

He and his petition reminded of a speech from the 1960s classic courtroom drama, Inherit the Wind, where legendary actor Spencer Tracy plays Henry Drummond, a Chicago lawyer modeled on the equally legendary “attorney for the damned” Clarence Darrow. The movie is set in a fictional small town called Hillsboro, somewhere in Kentucky or Tennessee, and recreates, with some artistic license, the Scopes Monkey Trial. It is a movie (and a play) about intellectual freedom. One of the playwrights explained that “we used the teaching of evolution as a parable, a metaphor for any kind of mind control…it’s not about science versus religion.  It’s about the right to think.”

That takes me to this great soliloquy by Tracy/Drummond. Frustrated, sweat pouring down his face, Drummond asks the Judge –

Can’t you understand? That if you take a law like evolution and you make it a crime to teach it in the public schools, tomorrow you can make it a crime to teach it in the private schools? And tomorrow you may make it a crime to read about it. And soon you may ban books and newspapers. And then you may turn Catholic against Protestant, and Protestant against Protestant, and try to foist your own religion upon the mind of man. If you can do one, you can do the other. Because fanaticism and ignorance is forever busy, and needs feeding. And soon, your Honor, with banners flying and with drums beating we’ll be marching backward, BACKWARD, through the glorious ages of that Sixteenth Century when bigots burned the man who dared bring enlightenment and intelligence to the human mind!

That’s how I feel about this young man and his petition. And why I could not just let it go.

The petition starts off with bland rhetoric about “high-quality education,” “the highest academic standards,” and being the one of “best school system in the region, state, and in our nation.” But quickly descends into fanaticism and ignorance. It talks about protecting our students from “cultural, social, or political indoctrination.” And how “Critical Race Theory (CRT), Critical Social Justice (CSJ), and Critical Theory (CT), or any similar harmful or destructive subject matter has no place in our elementary, middle, or high schools. Furthermore, the inclusion of CRT in our schools, in any form, is a government overreach and intrusion of parental responsibility.”

It goes on about how critical race theory focuses on “past ills perpetrated by previous generations, generalizes outliers as though they are representative of institutional, systemic, and pervasive problems, promotes false narratives, encourages students to loath [sic] this country and purposefully ignores the progress our nation continues to make toward creating this perfect union.” The petition would be laughable if it was not so dangerous. Although the petition is ostensibly about banning the teaching of critical race theory – which the Stafford County Board of Supervisors already did – it is also about much, much more.

The petition has nothing to do with protecting students from cultural, social, or political indoctrination. It calls for the very thing. It implores us, under the guise of “objectivity” and “truth,” to support teaching our children a myth advanced by social conservatives that racism is a thing of the past. It uses nationalistic rhetoric to try to trick us into silencing the lived experiences of Black and brown Americans. The idea that systemic racism does not exist, or that cases of racial discrimination in credit, employment, and housing are “outliers,” are themselves radical ideas that have no basis in reality.  Yet here they are touted as gospel truth.

For generations, social conservatives have tried to indoctrinate children under the guise of “objectivity” and “truth.” The Scopes Monkey Trial, when Tennessee tried to ban the teaching of evolution because it conflicted with a particular interpretation of the Bible, is perhaps the most well-known example because of its famous cast of characters like William Jennings Bryan, Clarence Darrow, and H.L. Mencken. But social conservatives are forever busy banning books from school libraries that conflict with their version of reality, attacking educators that try to expand the minds of their children, or demanding changes to school curricula.

This petition is just another iteration in a long line of attacks on freedom of thought – of the right to think – by social conservatives. Say what you will about critical race theory – and much has been said about it – this petition is most dangerous because it would give fanaticism and ignorance a toehold in our public schools. And where would we go from there? Would we march backward through the ages as Drummond predicts? It certainly seems like we would surrender fact to the mob. Truth would be nothing more than what a group of people wanted it to be – facts would no longer be “stubborn things” but malleable to serve political ends.

And that is what they want. They want us to surrender truth to the mob so they can whip them up into a frenzy time and again about this boogeyman or the next or the next or the next until they are able to push their entire cultural, social, and political agenda on our children through our public school curriculum. Make no mistake, this is all about indoctrination. They are eager to do it. Why else would they talk about the highest quality public schools in one breath and then push school vouchers and public funding for private schools in the next? Why else would the Stafford Republicans push this petition but stay silent on our pathetic school budget?

It is because they do not care about the teachers so much as what is being taught. In fact, social conservatives practically demonize educators as corrupting our youth when it serves their ends. How many Bertram Cates or John Scopes are there?Impossible to say.  But how familiar is the old line that schools are making veiled attempts to indoctrinate our students in this or that horrible, awful, no-good thing.  In fact, much of the hysteria about critical race theory seems to come from this false belief that schools are making veiled attempts, as if in the dark of the night, to indoctrinate students and staff through diversity and inclusion programs.

I appreciate that young man standing out there with his petition.  It takes courage to stand in the arena and fight for your beliefs.  And, after all, he is more or less a bystander in this struggle.  But what I do not appreciate one bit is the fearmongering of the adults who wrote that petition or the illiberal ideas that it advances.  It is part of a sustained assault on freedom of thought which, although not a formal part of the U.S. Constitution, is a cornerstone of the Enlightenment thinking that brought about our particular system of government.  Mind control is the business of failed states and tinpot dictators, it has no business in the United States and we should give it no quarter. 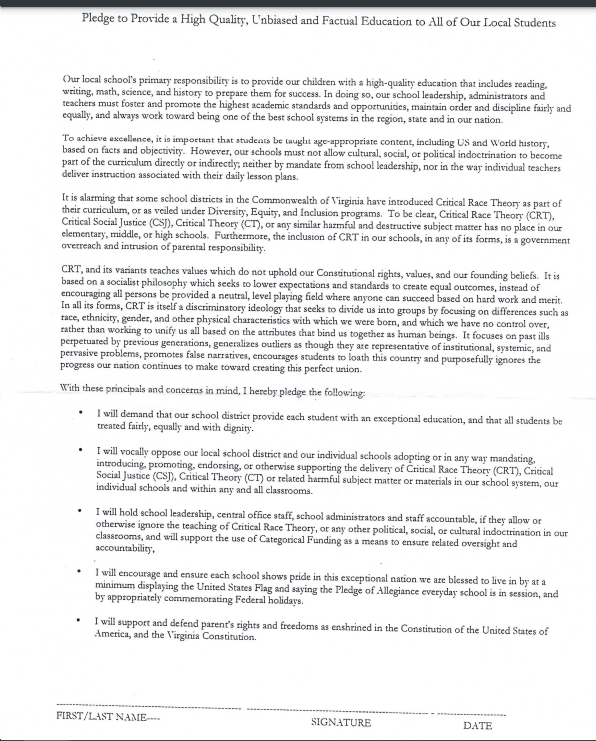