So…Glenn Youngkin is happy to appear on extremist right-wing shows like Sebastian Gorka (as Rick Wilson describes Gorka, “a fanboy of Neo-Nazi groups”), the odious Tucker Carlson, etc., but he refused to go on CNN’s “State of the Union” this morning, while Terry McAuliffe “took tough questions and shared his plans to life up all Virginians.” As host Dana Bash said after she completed her wide-ranging interview with Terry McAuliffe,  “thank you for coming in…and taking tough questions…We *did* invite your Republican opponent, Glenn Youngkin…to do the same and he declined.” This really says it all about Youngkin, that he’s terrified of answering questions about his far-right views on issue after issue (he’s a climate skeptic/denier and election “Big Lie” promoter; he said Dominion voting machines are “the most important issue we’re going to talk about”; his top economics advisor is the author of “Trumponomics,” he thinks Ron DeSantis is a model governor; he’s against COVID vaccine/mask mandates; he fear mongers and demagogues on “Critical Race Theory,” which isn’t even taught in Virginia public schools; he believes that the 2nd amendment is “absolute”; he’s tight with Ted Cruz; he said “Trump represents so much of why I’m running”; he’s strongly against women’s right to reproductive freedom; etc, etc.). With far-out-of-the-mainstream stances on issues like those, no wonder why Youngkin doesn’t want to give reporters and opportunity to ask him any questions. In return, on 11/2, we shouldn’t give Youngkin the opportunity to be governor of Virginia!

This morning, while @TerryMcAuliffe took tough questions and shared his plans to lift up all Virginians, @GlennYoungkin was in hiding.

Virginia needs a leader, not a coward. #VAGov pic.twitter.com/cug7xkBRRs

I’ve got real plans to help Virginians. Glenn Youngkin is laser focused on implementing his and Trump's dangerous agenda here in Virginia. We can't give him the chance. pic.twitter.com/R6R0d93MBf

Conservative blog Bearing Drift: "Gorka, a Hungarian-Brit immigrant with a history of cozying up to neo-Nazis…is so sleazy and radioactive that even other parts of Trumpworld pretend he doesn’t exist. That wasn’t enough to keep Youngkin away, however." https://t.co/NabPlb2Dit pic.twitter.com/OgcBN4bz3J 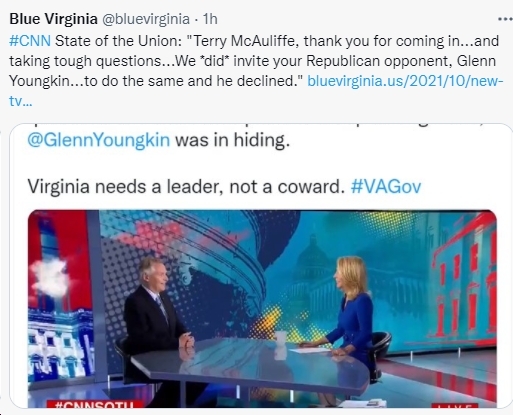 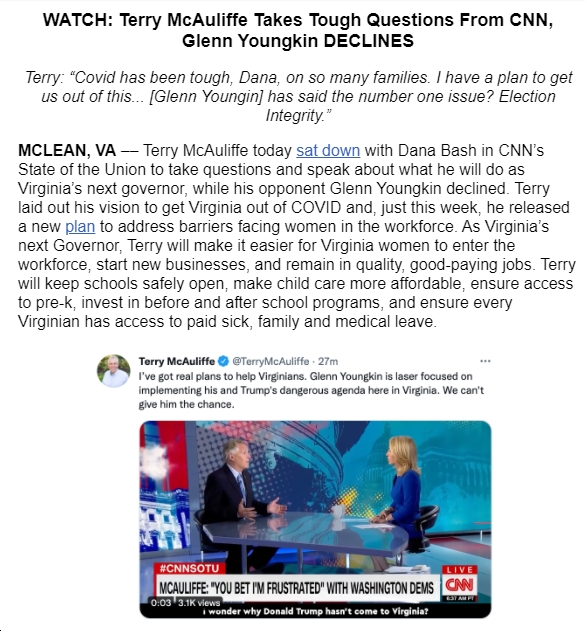 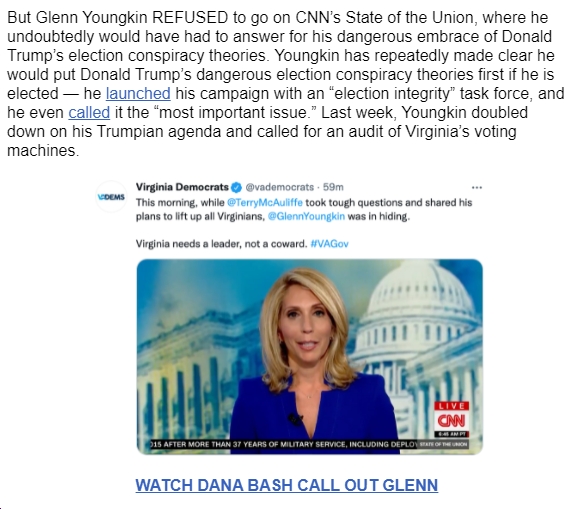