Beyond parody…definitely not living in a sane world if Virginia voters elect Youngkin next Tuesday. For more background on this, see Fairfax County parent wants ‘Beloved’ banned from school system (WaPo: February 2013):

The book Laura Murphy wants removed from Fairfax County classrooms is considered a modern American classic. It is a Pulitzer Prize winner and a masterpiece of fiction whose author’s 1993 Nobel Prize in literature citation said that she, “in novels characterized by visionary force and poetic import, gives life to an essential aspect of American reality.”

But Toni Morrison’s “Beloved,” Murphy said, depicts scenes of bestiality, gang rape and an infant’s gruesome murder, content she believes could be too intense for teenage readers.

Also see The “Beloved” Bill: The Controversy of HB 516, which explains the history of bill in the Virginia General Assembly, its veto by then-Gov. McAuliffe, and the failure of the then-overwhelmingly-Republican House of Delegates to override McAuliffe’s veto. Anyway, now Glenn Youngkin is running on this “culture war” stuff. Great, eh?

This woman wanted to ban Beloved (which won the Pulitzer Prize) by Toni Morrison (who won the Nobel Prize in Literature) from Virginia schools.

Wouldn’t have advised book banning as a closing argument for Team Youngkin, but here we are https://t.co/6SfH9nbxOi 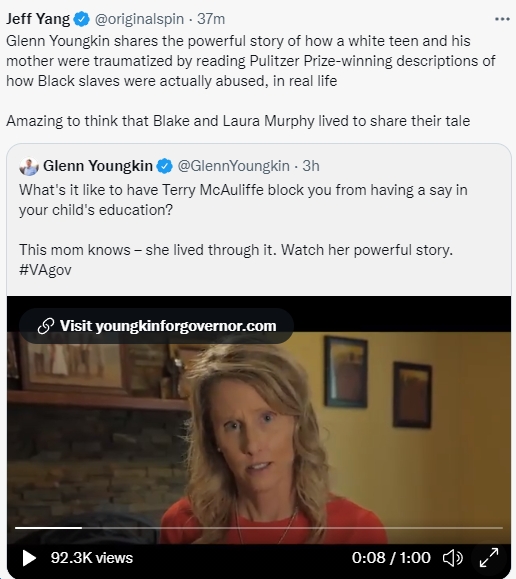 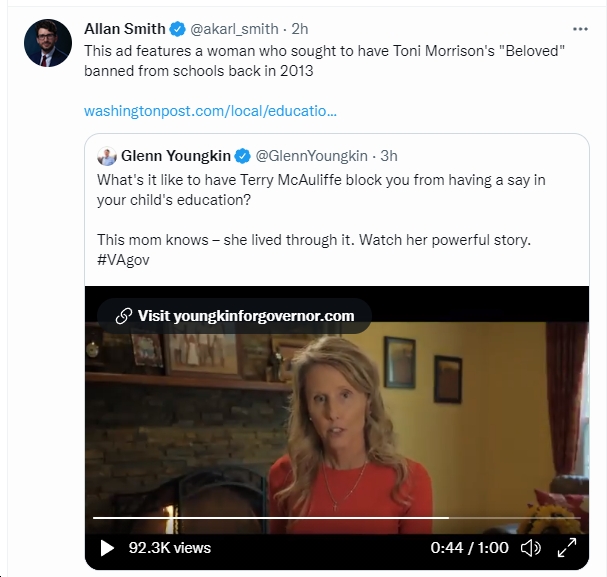 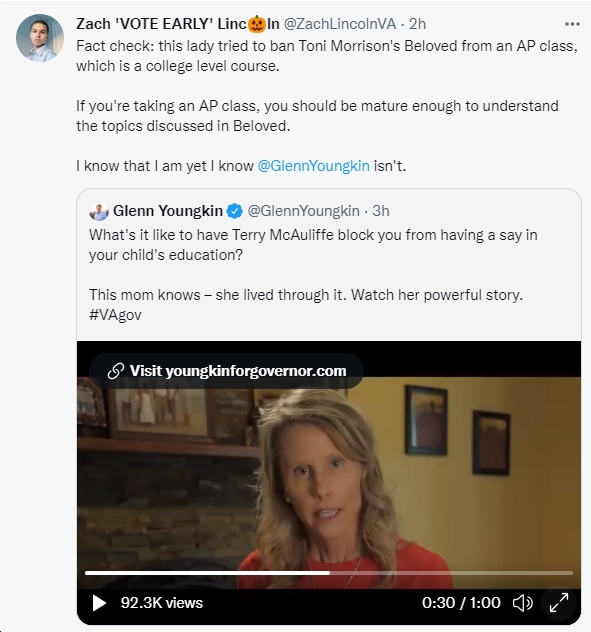 VA Sen. @ssurovell: "FCPS changes at TJ resulted in a class with a higher GPA & children from Eastern Fairfax and Prince Williams Counties FINALLY were able to get in - @GlennYoungkin appoints a zealot who wants them out" https://bluevirginia.us/2022/07/friday-news-trumpist-extremist-supreme-court-a-threat-to-the-world-congress-can-must-rein-in-scotus-republicans-are-now-a-coalition-of-crazies-and-cowards-youngkin-dodges-questions-on-ab#comment-5904148414

"This is the coal industry lobbyist who led the EPA for Trump and whose appointment by @GovernorVA as natural resources secretary was torpedoed by #Va Senate Democrats. Youngkin had made it very clear he’d be keeping Wheeler around..." - @RTDSchapiro https://bluevirginia.us/2022/07/massive-cluster-youngkins-new-executive-order-puts-trumps-epa-director-fossil-fuel-industry-tool-andrew-wheeler-in-charge-of-cutting-regulations-in-virginia-mistakenly-links-to-donald-trumps-website#comment-5904141033