One day after announcing his selection for Virginia’s new Secretary of Education (Aimee Rogstad Guidera), Governor-elect Glenn Youngkin (R) has now announced his pick for Secretary of Commerce and Trade, Caren Merrick. For everyone who’s been following Virginia politics  – and this blog – for the past decade, you probably remember Merrick from her 2011 run for State Senate against Democrat Barbara Favola. For some stories posted about that race, see:

Finally, from Barbara Favola’s 2011 website, here’s what she had to say about Caren Merrick:

P.S. Just as he flat-out lied yesterday – falsely claiming that Virginia needs to be “restoring expectations of excellence” (when, in fact, Virginia education is already excellent) – today Youngkin lied in claiming that “Virginia’s jobs machine has stalled out.” In fact, as Gov. Northam pointed out yesterday, “Virginia’s unemployment rate dropped to 3.4 percent in November, which is 2.4 percentage points below the rate from one year ago and well below the national rate.” 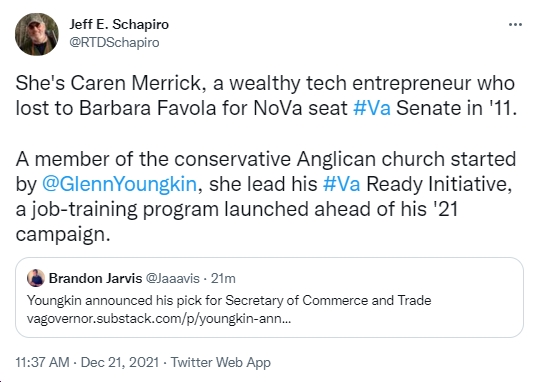 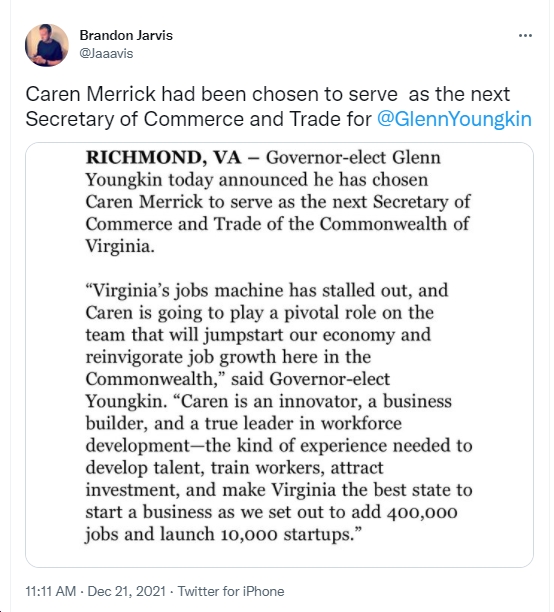