See below for some good news (I know, what a concept these days! LOL) from the Fourth Circuit Court of Appeals, which has issued a ruling in a case in which “several environmental advocacy organizations — Wild Virginia, the Sierra Club, Appalachian Voices, the Wilderness Society, Preserve Craig, Save Monroe, and the Indian Creek Watershed Association (collectively, “Petitioners”) — seek review of the renewed decisions of the United States Forest Service (the “Forest Service”) and the Bureau of Land Management (the “BLM”) to allow the Mountain Valley Pipeline (the “Pipeline”), an interstate natural gas pipeline system, to cross three and a half miles of the Jefferson National Forest in Virginia and West Virginia.”

The Court’s conclusion is that:

Overall, this is clearly not good news for the Mountain Valley Pipeline fracked-gas boondoggle. As attorney Jon Sokolow puts it:

“Once again, the slipshod permitting review by regulatory agencies has been exposed as having failed to follow applicable law. As a result, MVP has once again lost the ability to complete this project as it now has no permit to cross the Jefferson National Forest in Virginia. At a minimum, this will cause MVP further delay and expense.

There also are several other decisions that likely will be issued any day now. If this decision is a precursor to other losses before this Court, we may be witnessing the beginning of the end of this corporate boondoggle.”

On the point about “further delay and expense,” note that this unnecessary pipeline project is now up to something like $6.2 billion, up from its initially estimated price tag of $3.5 billion. For that money, what we’ll be getting is global warming pollution equivalent to “26 U.S. coal plants or 19 million passenger vehicles per year.” All while the planet is dangerously heating up, while clean power costs are plummeting, and while we need to get off of fossil fuels ASAP for a wide variety of reasons. In sum, this fracked-gas pipeline is the exact opposite of the direction we need to be going, for both environmental and economic reasons, and should be canceled immediately, with the money invested instead in energy efficiency, solar, wind and other CLEAN energy sources. 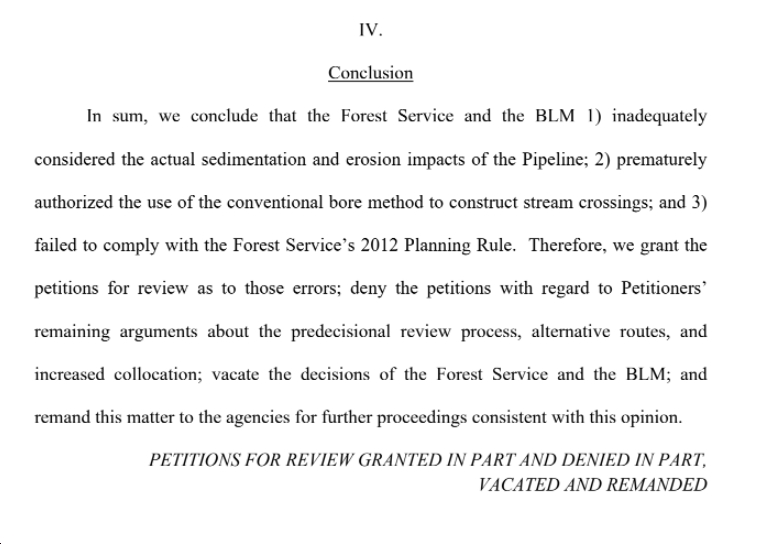