“I am writing today in response to your recent comment on voting rights in which you insinuated that African Americans are somehow not American citizens. This is 2022 and being American is not synonymous with looking or thinking like you. African Americans are, in fact, American citizens deserving of our recognition, respect, and equal protections under the law. The United States was built on the backs of African Americans; despite this, we have overcome institutional obstacles and barriers to be successful, contributing, productive members of our nation. Your inability to recognize us as Americans is appalling and deeply disturbing,” the letter reads.

McConnell’s comments were made to a reporter after Senate Republicans halted consideration of the Freedom to Vote: John R. Lewis Act, legislation that would implement federal standards for voting and election protections.

“Your comments give greater insight into your motivations for opposing voting rights legislation, and they are prejudicial and morally reprehensible,” the letter continues. “The very fate and integrity of our democracy is at stake, and you have shown a complete disregard for the severity of the situation. Despite your indifference and world views, we will continue fighting to safeguard the sacred right to vote. America will find a path forward to pass the John R. Lewis Voting Rights Advancement Act and the Freedom to Vote Act. Democracy will prevail; America will prevail and overcome.” 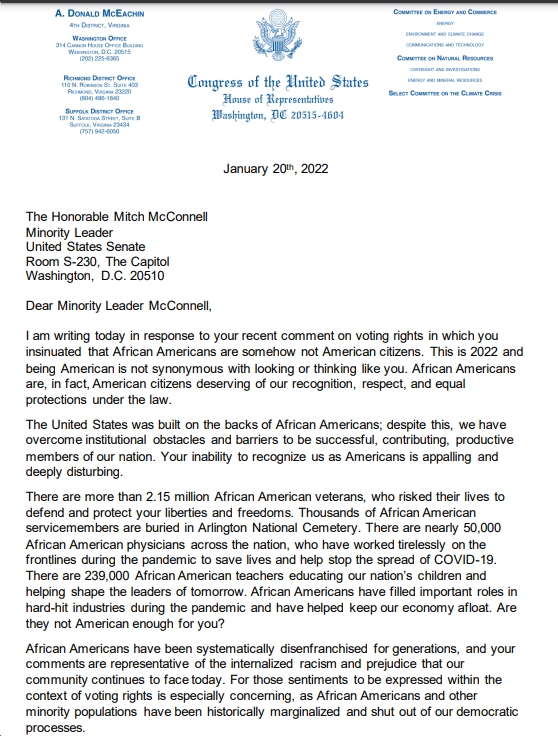 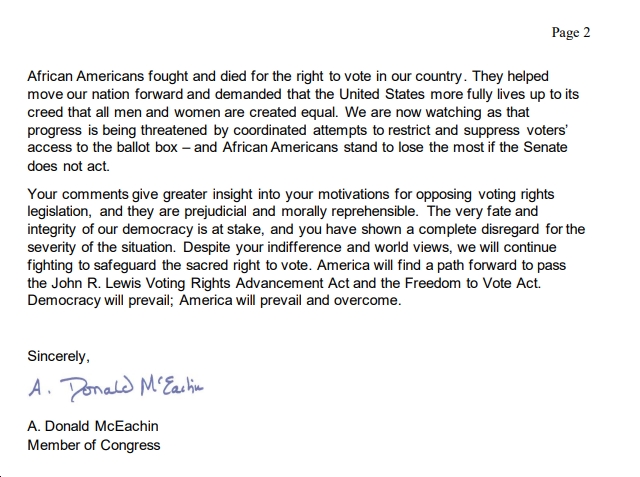 “These bills would have ensured that every tenant has equal access to the court system, regardless of their income. This [Youngkin] veto will lead to more Virginians being unfairly evicted from their homes...” https://bluevirginia.us/2022/05/friday-news-trillions-of-in-stranded-fossil-fuel-assets-there-were-good-guys-with-guns-and-it-didnt-matter-dont-let-maga-republicans-off-the-hook-for-enabling-violence#comment-5870153019 h/t @JennMcClellanVA @JeffMBourne