Let’s hope Sen. Tim Kaine is right about this:

“We didn’t have all Democrats on board [early in the year] with the ‘Freedom to Vote Act’. We had 49 on board but not 50. In May, Sen. Schumer asked if I would work together with others to try to get Sen. Manchin on board. And we worked from May until September, looking at the ‘For the People Act’…introduced in September…We undertook massive efforts in September, October, November to put the bills on the floor, to talk to the Republicans…and it took us two months to demonstrate what many of us believed…that there was going to be virtually no Republican help…with the exception of Lisa Murkowski…Once that was done…now we’ve been working on looking at the Senate rules to facilitate getting this bill on the floor, having a debate and hopefully passing it. And I think you’ll see us doing it no later than Martin Luther King Day...We can’t allow the democracy destroyers to win…I’m getting ready for a big, long floor fight about this…Sen. Sinema is…more forward leaning on the voting bills themselves, but she’s tougher on willingness to make rules adjustments…In my discussions with her, my point is, we don’t have to abolish the filibuster…would you be open to restoring it to what it used to be?…The discussions are very cordial and candid and respectful…” 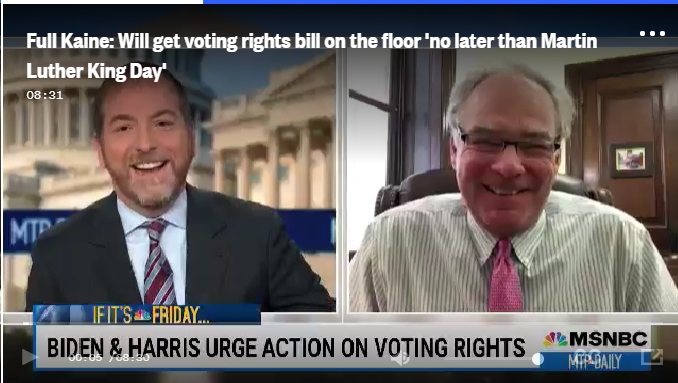