“Data science software and consultancy company” Civis is out with a very interesting analysis of the 2021 Virginia and New Jersey elections. See below for key takeaways, namely that:

This analysis largely confirms what FiveThirtyEight.com wrote back in December 2021, that “McAuliffe’s biggest underperformance relative to Biden came in heavily Biden-leaning areas“; that “Youngkin actually outperformed Trump in Virginia’s most pro-Trump precincts in an off-year election“; and that “it was in the pro-Biden precincts that this race was decided. In those precincts, the Democratic vote total dropped by hundreds of thousands, giving Youngkin the margin he needed to win.”

Also worth noting from the Civis analysis, it was both “changes in the turnout environment” AND “vote switching” which caused a “shift [in] statewide election results about 6 points to the right in each state [VA and NJ] along with significant swings in their respective legislatures.”

By the way, the fact that the same basic trends were seen in both New Jersey and Virginia calls into question the impact of candidate quality – or lack thereof – and appears to point more to national factors, the usual phenomenon where voters go in the opposite direction of a new party in the White House in the year or two after that party is elected, etc. Of course, it’s an open question whether a different makeup of the Virginia Democratic ticket in 2021 – let’s say, Jay Jones (African-American, from the crucial Hampton Roads region) instead of Mark Herring (White, from Northern Virginia…along with the other two members of the ticket) – might have boosted turnout just enough to push one or more of the statewide candidates, and potentially a few House of Delegates candidates, from the “L” to the “W” column. Since we can’t rerun the election, we’ll never really know, but it’s an interesting question for 2025 and beyond as to how diverse (geographically, racially, ethnically, gender makeup, etc.) the Democratic ticket optimally should be… 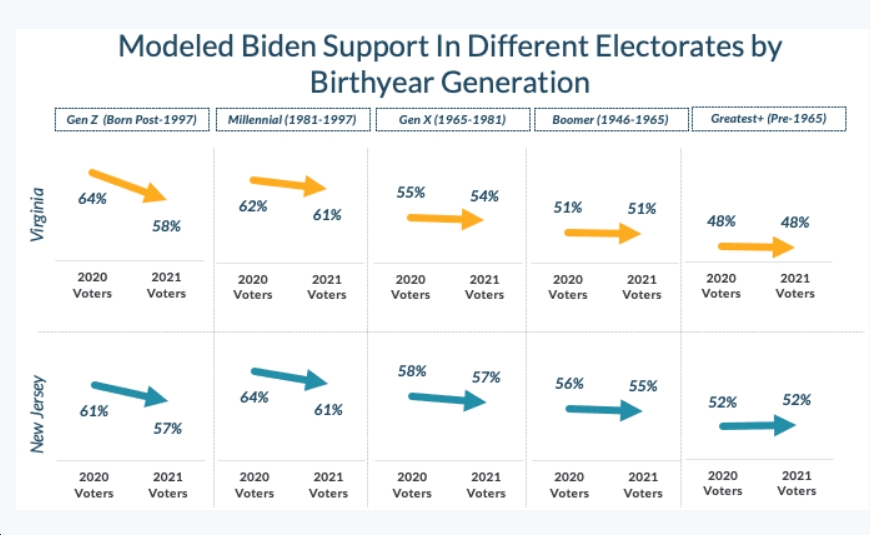