I want to talk about how breathlessly the media is reporting on the Buffalo Shooter. “How,” they gasp, “could he ever have gotten so radicalized?! Was it social media? Video games? Mental health issues?”

Truly, the fact I haven’t had an aneurysm at those kinds of vapid wonderings is nothing short of amazing. Yes, yes, it’s social media. Video games. It couldn’t be, you know, stuff you used to only be able to find on /pol or 4CHAN or Stormfront being uttered aloud by the most watched cable news talking head in the country on Fox News every night.

We have a major problem with the kind of people who are perpetrating these incidents. Far from being lone wolves, these terrorists – almost exclusively young white men – are radicalized online in chat rooms and on websites that take a sick pleasure in abetting future acts of violence, doing everything they can to train and equip people to kill.

I know I’ve glossed over it very briefly in talking about my history, but before I decided to run for office myself, I was a digital counterops guy. This has borne great fruit in the past; in 2008, for instance, in what now seems like refreshingly naive times working for Obama Rapid Response, we exposed the leader of the “PUMA” movement (of supposed Hillary Clinton supporters who would never vote for Barack Obama) as a John McCain staffer.

Ahh, those were the days. But that’s the way I preferred to help, and the group I worked with was good at it. We made a difference, and although I worked independently in 2012 and 2016, we did what we could. In 2016, although the Clinton folks insisted they didn’t need any help, we ignored them. We were key in drumming up support to get Evan McMullin on the ballot here in Virginia, to make sure the “Never Trump” vote had no excuse to change their minds. A major national Clinton campaign staffer later thanked me for that after the election, but I would’ve been happy to have been completely unneeded.

But even then – even earlier, back to the Bundy/BLM standoff, back to the “unskew the maps” talk of 2012 – you could see the leakage from the forums I alluded to above. Ones where, if you were to eavesdrop in them and flip out a few key phrases with “Allahu akbar!”, you’d truly not be able to tell the chatter was from an ISIS cell in Syria. And watching their verbiage and influence begin to leak out into the mainstream has been one of the most terrifying things I’ve ever seen in my life.

I’ve often talked about what prompted me to run for office for the first time in 2017. Yes, it was the Trump election that drove that. But it wasn’t just that Trump was taking office; it was watching these incel forums erupt with open glee that this was their time. That their candidate had finally been elected. And now, they would finally get the chance to implement their “final solution” to any and every problem they’d ever suffered in their lives.

And I stayed with it to some extent, even after I started running for office. It’s why, in early August 2017, I began screaming aloud to everyone I could think of to try and bring attention to what was about to come to our community.

That I couldn’t do more to make people take it seriously is one of the biggest failures of my life.

I’m not going to say any more about that. Things in Charlottesville could have been so much worse without the hard work some of our local activists did to keep everyone safe; to eavesdrop and feed plans to appropriate places to kneecap them; to keep records of what was said so that people could be held accountable. These people are heroes – but will forever remain anonymous because of the very real threats to their lives that could emerge if anyone found out what they did. 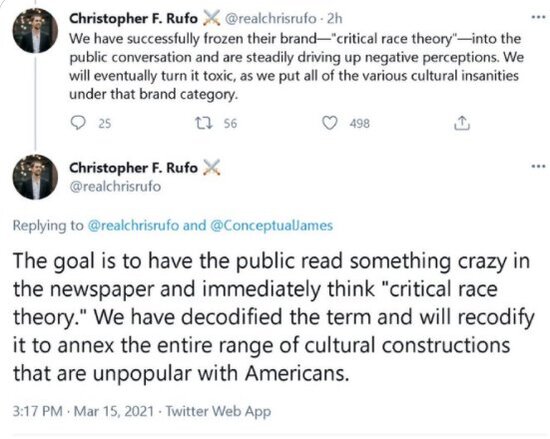 Here, Republican strategist Christopher Rufo admits aloud the plan to radicalize people and then shrug at what they end up doing.

But nobody took the hard lessons from what our community suffered, and things are quickly devolving. To suggest we cannot do anything about these dead-enders – who are being radicalized by mainstream politicians and political talking heads, whipping them into a frenzy, and then shrugging helplessly when violence strikes, as if that wasn’t their entire goal in the first place – is insane. Suicidal!

This has to be a systemic effort to fix this. It needs to be one of our top priorities, right up there with the climate crisis, affordable housing, inflation – because these people are desperate to take advantage of the pain and suffering those problems are causing. They know that their easiest way into complete power is to let those problems become exacerbated to the point they can use them to seize power- and once they have that power, they will NEVER give it back.

We need leaders who are not afraid to name this problem, to call it what it is- terrorism- and work endlessly to stop it, rather than simply offering “thoughts and prayers” while waiting meekly for another attack to happen.

Kellen Squire is an emergency department nurse from Charlottesville, Virginia, and a candidate for the 55th District in the Virginia House of Delegates! Click here to donate to, volunteer for, or get the word out about our people-powered