Good to see VA Sen. Jeremy McPike saying that he’s a definite NO vote on any stadium deal with Dan Snyder’s odious franchise, the “Commanders.” The final straw for McPike? Check this out.

“Commanders defensive coordinator Jack Del Rio, who has been with the team since 2020, has kicked up a bit of a hornet’s nest with a tweet on June 6 in which he compares the Black Lives Matter protests in the wake George Floyd’s murder to the January 6 insurrection attempt at the nation’s capital.”

But wait, it gets worse! Here’s what Del Rio had to say about the violent, premeditated assault on the US Capitol and attempt to stage a coup in the United States of America.

“Why are not looking into [the protests] if we’re gonna talk about [the insurrection attempt]. Why are not looking into those things. Because it’s kinda hard for me to say, I can realistically look at it. I see the images on TV, people’s livelihoods are being destroyed, businesses are being burned down. No problem. And then we have a ‘dust-up’ at the capital, nothing burned down. And we’re gonna make that a major deal. I just think it’s kinda two standards.”

Completely unhinged. But wait, you say, this is just one guy, not reflective of an entire franchise, and shouldn’t impact whether or not Virginia does a deal with said franchise? Yeah…except that this franchise is rotten inside and out. As Rep. Don Beyer (D-VA08) explained back in April:

…“super-rich sports team owners like Dan Snyder do not need federal support to build their stadiums, and taxpayers should not be forced to fund them.”

Beyer recently met with former employees of the Washington Commanders, who described unacceptable working conditions under Snyder’s ownership. Beyer expressed his strong support for securing the release of the report detailing the results of the investigation commissioned by the NFL into the workplace environment in the Washington Commanders franchise under Snyder, a matter Beyer has since raised with colleagues in the House.

Also, there’s this (“Dan Snyder’s Commanders Are a Failed State”):

An entire generation has only witnessed the franchise being run by a corrupt deviant who interferes in the affairs of his organization’s football operations. The NFL has investigated him for repeated instances of sexual misconduct. Congress has even opened several proceedings into the behavior of Snyder and financial improprieties. Attorney generals’ offices in Virginia and the District of Columbia are investigating the franchise’s executives, including Snyder, for breaking financial laws. In April, the Commanders’ former VP of sales and customer service, Jason Friedman, alleged under oath that the team had “two sets of books.” One which was given to the NFL that “underreported certain ticket revenue,” and another which had accurate revenues, per the letter.

If the investigation into Snyder allegedly maintaining two accounting books to shortchange his revenue-sharing commitments turns up evidence, the NFL can save the next generation of employees and fans from having to endure the reverberations from the Snyder regime’s latest blight. Currently, Snyder is in the final stages of wrangling a stadium construction deal in anticipation of the Commanders’ contract with FedEx Field expiring in 2027.

In sum, this franchise is a complete cluster-you-know-what, with a scumbag owner, an insurrectionist and racist defensive coordinator, etc. Which is why every single Virginia delegate and senator should oppose – strongly – any deal with said cluster-you-know-what. Any further questions? 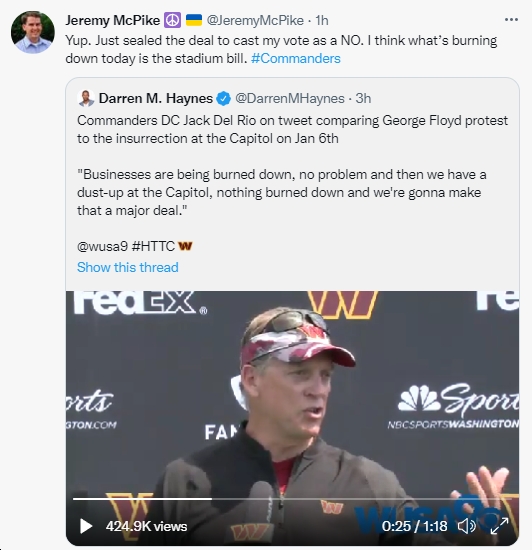 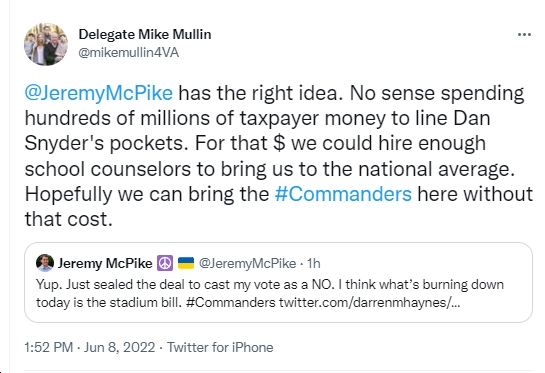 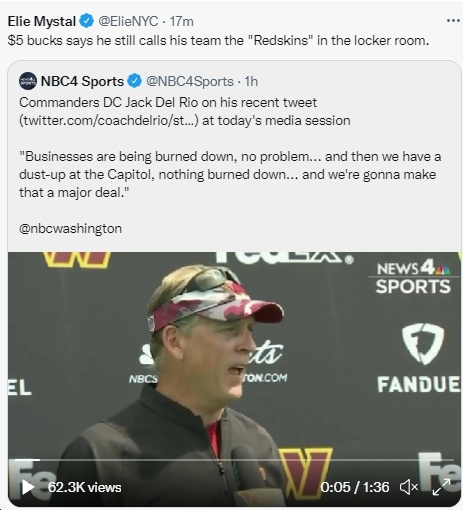 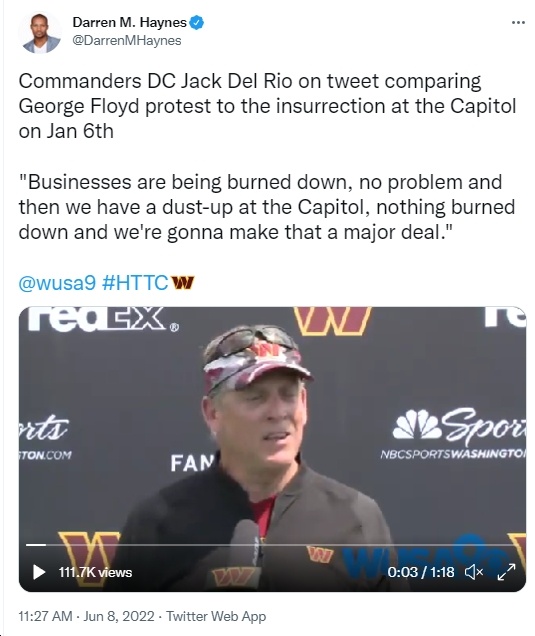 What else does Youngkin believe in that isn't remotely true? Purple unicorns? The moon made of cheese? The tooth fairy? Phlogiston? https://bluevirginia.us/2022/08/wednesday-news-scientists-warn-of-dire-effects-as-mediterranean-heats-up-biden-signs-biggest-step-forward-on-climate-ever-cheney-loses-gop-primary-vows-to-keep-trump-from-white-house#comment-5951665985 h/t @ajm0614 @kylemcdanielva