See below for reactions from Virginians to the appalling, extremist decision by a bunch of far-right nutjobs in robes on the US Supreme Court decision overturning Roe v Wade. 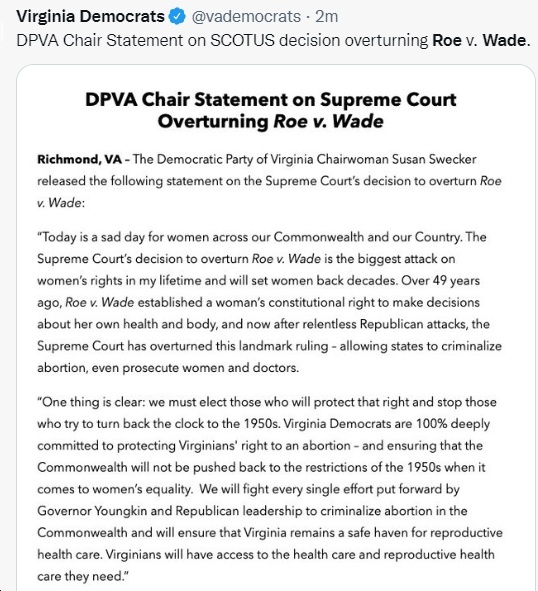 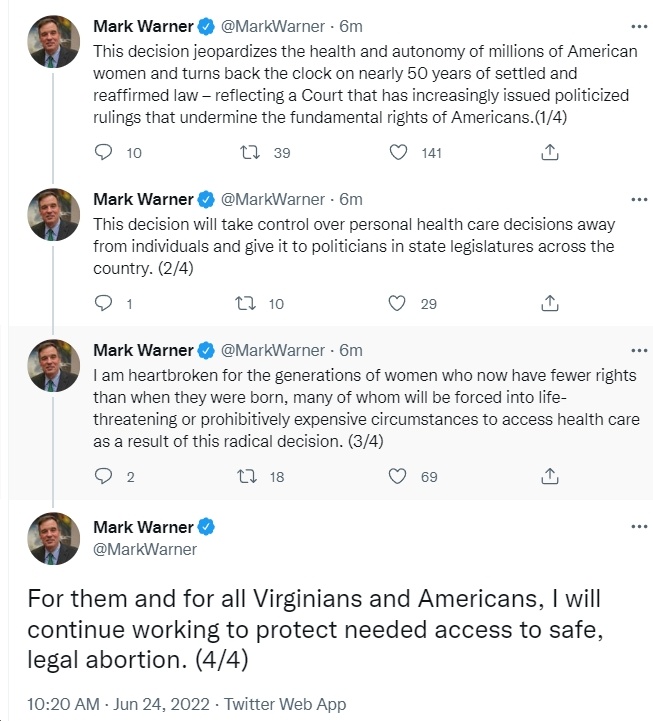 “This decision jeopardizes the health and autonomy of millions of American women and turns back the clock on nearly 50 years of settled and reaffirmed law – reflecting a Court that has increasingly issued politicized rulings that undermine the fundamental rights of Americans. This decision will take control over personal health care decisions away from individuals and give it to politicians in state legislatures across the country. I am heartbroken for the generations of women who now have fewer rights than when they were born, many of whom will be forced into life-threatening or prohibitively expensive circumstances to access health care as a result of this radical decision. For them and for all Virginians and Americans, I will continue working to protect needed access to safe, legal abortion.”

In Roe v. Wade, the Supreme Court held that the Constitution of the United States protects a pregnant woman’s freedom to choose to have an abortion. The Court’s decision to overturn Roe v. Wade means that after nearly 50 years, this freedom is no longer guaranteed nationwide, and more than half of states are expected to ban or harshly limit access to abortion following today’s ruling. In several states, there will be no exceptions for women who become pregnant through rape or incest or in cases where abortion is necessary to protect the health of the woman.

Overturning Roe v. Wade also opens the door for states to attempt to restrict or ban common birth control methods such as Plan B or intrauterine devices.

“I am deeply disturbed that the Supreme Court has overturned Roe v. Wade and Planned Parenthood v. Casey, upsetting decades of precedent protecting the right of women to make fundamental personal decisions about contraception and abortion without unnecessary government interference. That’s why I’ve been engaged in efforts in the Senate to codify the basic framework of Roe v. Wade and related cases into federal law. We’re not going to give up on the fight to protect the right to choose.” 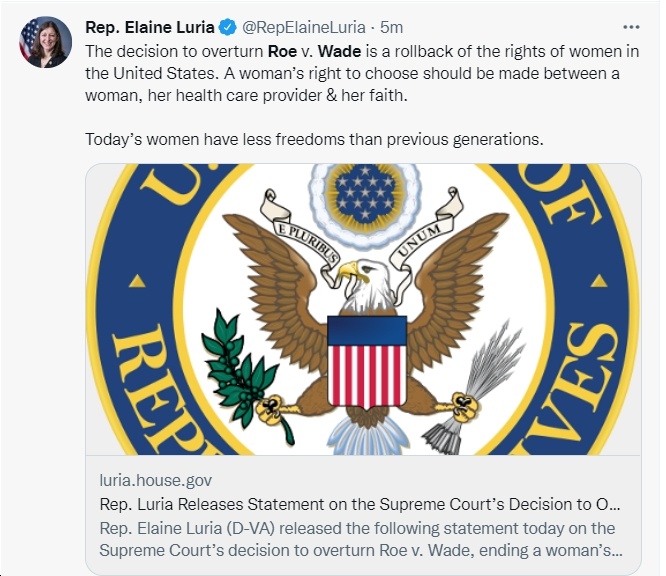 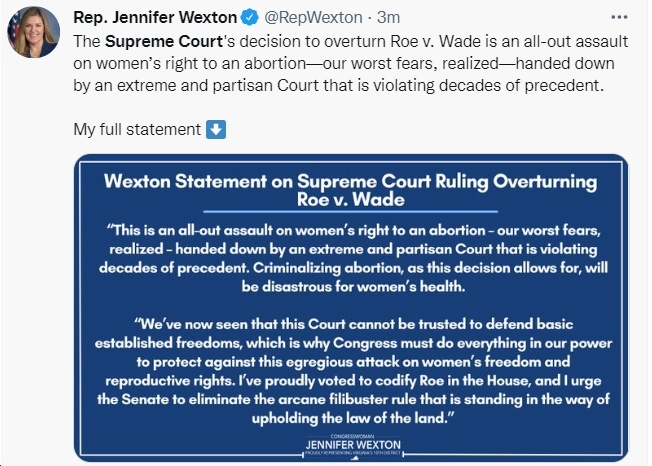 “As a mother, sister, and daughter, I know how today’s ruling feels for millions of women throughout America. I strongly disagree with the majority’s decision, as it undermines the right to privacy and a woman’s right to choose.

“In response to this decision, there will be a renewed push among anti-abortion politicians to strip away fundamental liberties from the people they were elected to serve. As a federal lawmaker, I will work to restore a woman’s right to choose and protect our rights under the Fourteenth Amendment of the Constitution.

“In the wake of today’s ruling, it falls on all of us to defend our neighbors, protect all rights enshrined under the right to privacy, and make sure women are never criminalized for making decisions about their own bodies. Rather than punish America’s women, lawmakers must stand with them. And rather than pursue extreme new laws, our elected officials must remember their obligation to protect our basic rights. Today is a dark day, but it cannot be the end of our efforts.”

Last year, Spanberger cosponsored and voted to pass the Women’s Health Protection Act, which would codify the decisions in Roe v. Wade and Planned Parenthood v. Casey as law of the land. 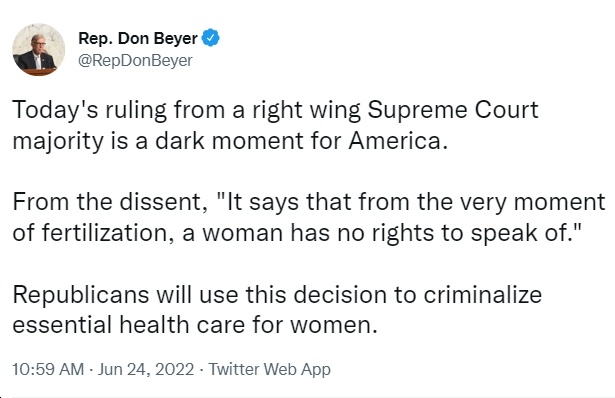 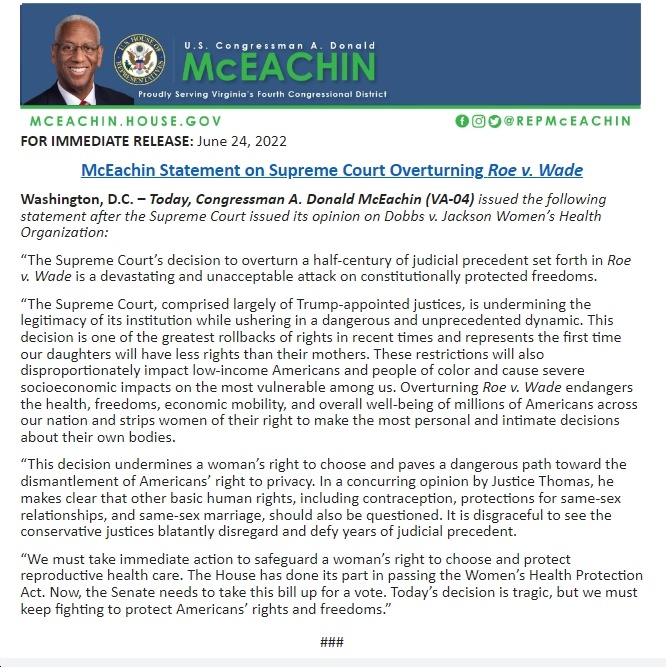 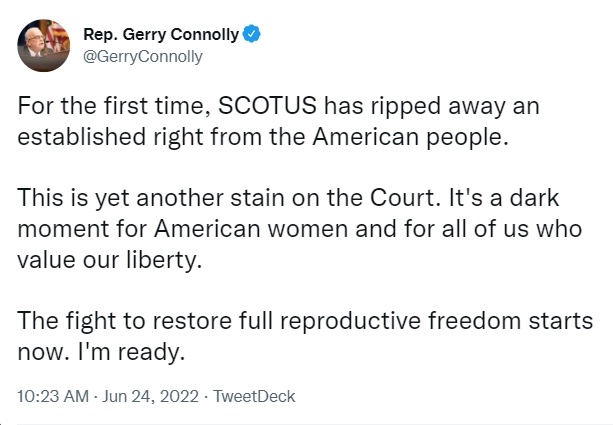 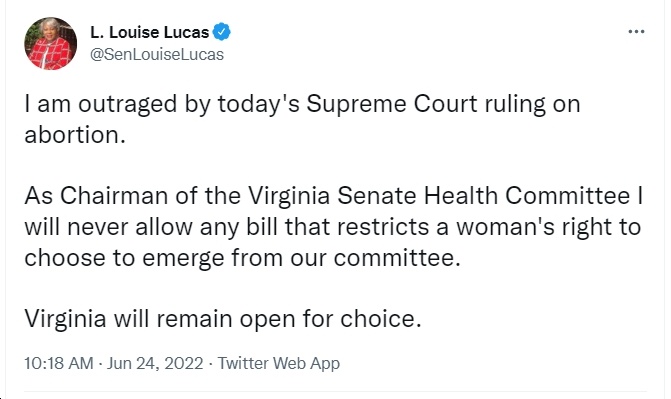 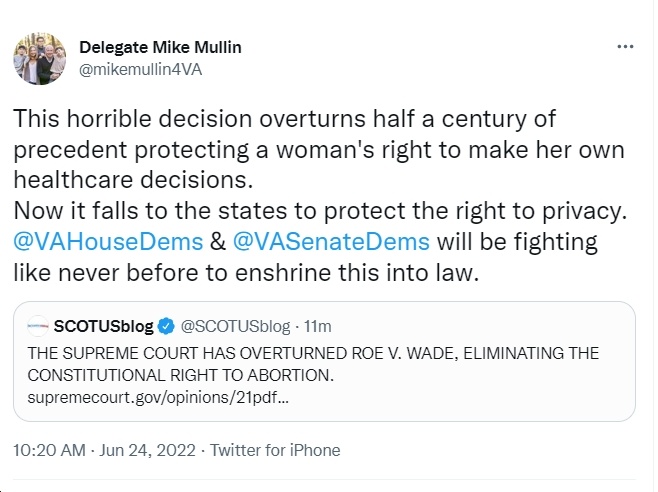 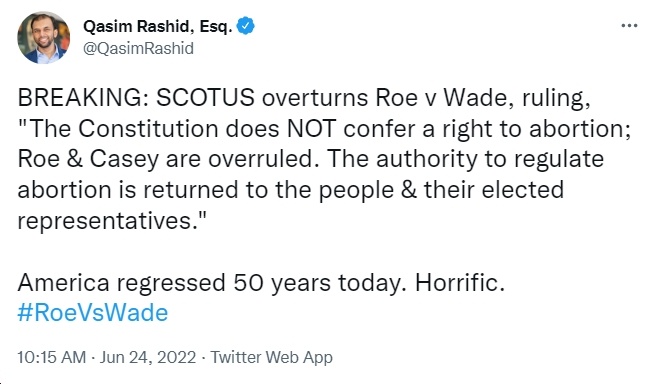 Richmond, Va. – Today, the United States Supreme Court voted to overturn Roe v. Wade and Planned Parenthood v. Casey in a 6-3 decision. This cruel decision fully strikes down federal protections of abortion rights. The status of abortion is now up to each state to decide, with 13 states enacting trigger laws, quickly banning abortion for patients. The majority of Americans support abortion rights and this decision creates severe inequities in access for abortion-seekers across the country. Despite this ruling, abortion remains legal in Virginia.

“This is a devastating decision that will impact millions of people across the country,” said Jamie Lockhart, Executive Director of Planned Parenthood Advocates of Virginia. “PPAV’s mission has always been to protect abortion access for those who need care in Virginia and beyond, and this decision does not change that. We will continue to hold anti-abortion legislators accountable and work with our champions to ensure they block any attempts to restrict access to care for those who need it. In this moment, we see and stand with the majority of Virginians who want abortion to remain legal. Not only that, but Virginia voters will be watching how legislators react at this moment and remember when it comes time to head to the ballot box.”

“For now, abortion is still legal in Virginia. But this dangerous and chilling decision will have devastating consequences across the South, forcing people to travel hundreds, sometimes thousands, of miles for abortion care or potentially be forced to remain pregnant against their will,” said Jenny Black, CEO of Planned Parenthood South Atlantic. “Our highest priority is making sure our patients can get the care they need. Our health center doors remain open, and we aren’t going anywhere.”

“We are outraged. Personal medical decisions about people’s sexual and reproductive health should be made by patients, and patients alone. Politicians and judges should never be making personal medical decisions about other people’s bodies,” said Planned Parenthood of Metropolitan Washington, DC President & CEO Dr. Laura Meyers. “Today’s ruling will most impact Black and Brown women, trans and nonbinary folks, people earning low incomes, and people who live in rural communities, where health care can be extremely hard to access,” said Meyers.

“The Virginia League for Planned Parenthood is more committed to its mission to provide high-quality health care than ever before. Community care begins with each of us, and VLPP staff remain committed to meeting the unique needs of every patient, whether in-person or through telehealth. The Court’s decision to strip people of their bodily autonomy and delay access to essential health care is sure to have a cataclysmic impact on individuals, families and communities. We vow to counter this grim decision by continuing to provide compassionate care every day. We have weathered many storms across the Commonwealth, and we will weather this one too. We were built to provide hard to access and stigmatized care and education – we will use everything we’ve learned until now to stand arm-in-arm with our partners to provide the care and information every person deserves.”

Abortion providers in Virginia have consistently served those seeking care within the region and beyond. This need for compassionate abortion care will only increase as a result of this decision, causing extreme strains on both providers and patients who will be coming from across America to receive a basic health care service. Regardless, Planned Parenthood remains committed to welcoming all patients with open arms and will continue to provide abortion care – no matter what.

RICHMOND, VA — Today, the Supreme Court of the United States issued its opinion in the case of Dobbs v. Jackson Women’s Health Organization. This opinion overturns the landmark Roe v. Wade decision from 1973 that ensured a woman’s constitutional right to an abortion without excessive government restriction. As a result of today’s decision, states across the nation will be free to ban or even criminalize abortions and other reproductive health care, but due to Democratic efforts in 2020 and 2021, abortion access in Virginia will continue.

House Democratic Leader Don Scott issued the following statement in response: “This is a day we have long been expecting yet still hoped would never come. I stand with all those across the Commonwealth who are experiencing grief, anger, and fear today. Last session, Glenn Youngkin’s party tried to ban abortion outright in Virginia. Just last week, the governor himself sent us a budget amendment that would have prevented low-income women from accessing abortion even with the most severe fetal diagnoses. This is what we’re up against. Here’s the good news: Thanks to the work of advocates and Virginia Democrats over the last few years, reproductive rights here in the Commonwealth are more protected than ever. The Supreme Court’s decision does nothing to change the fact that, right now, abortion remains safe and legal in Virginia. The majority of Virginians believe it should stay that way. That’s why House Democrats are committed to sending the people of Virginia a constitutional amendment to enshrine abortion rights in the Constitution. Republicans blocked our efforts to introduce that legislation last week, voting to keep control over Virginians’ bodies consolidated in the hands of Glenn Youngkin and his associates in the General Assembly. The fight is far from over. We won’t stop working to protect bodily autonomy and access to reproductive health care for all Virginians.”

House Democratic Caucus Chair Charniele Herring said: “House Democrats stand with a majority of Virginians who believe in every person’s right to bodily autonomy. We passed the Reproductive Health Protection Act in 2020 and, as a result, abortion is still legal and accessible in Virginia. Today, we recommit to fighting every day to keep it that way.

The decision released today is devastating but while we are disappointed, we are not surprised – Republicans have been working toward this goal for decades with increased attacks in recent years. We know that some Republicans, like Governor Youngkin, may try to hide their extreme positions on abortion and other reproductive health care; they know how unpopular those positions are in Virginia. But we won’t let them hide – we know it is our responsibility to call them out for any attempt they make to limit a woman’s right to make her own health care decisions.”