I missed this the other day, by WVTF reporter Mallory Noe Payne, but now the WaPo has posted a story on the subject, reporting:

The Lego Group delivered a major gift to Gov. Glenn Youngkin (R) this week with plans to open a $1 billion factory in Chesterfield County, but it briefly made public a frequently asked questions document that seemed to distance the company from Youngkin’s conservative stance on race and the environment.

The FAQ is no longer accessible online, but was seen by several news reporters — at least one of whom posted images of it on Twitter. At a time when the Walt Disney Co. is at odds with the state of Florida over LGBTQ policies, and major companies frequently make business decisions based on social issues, the document highlights questions about whether Youngkin’s tilt to the right will affect Virginia’s reputation in the business world.

According to the FAQs, which you can see below, LEGO says:

In short, LEGO decided to come to Virginia (and presumably other companies did so as well) in part due to progressive, pro-clean-energy policies adopted by *Democrats* and opposed by *Republicans* including Glenn Youngkin. In other words, companies are coming to Virginia *in spite of* Republicans’ regressive policy ideas, which hopefully won’t pass thanks to the Democratic-controlled Virginia State Senate’s “brick wall.” Let’s keep it that way. 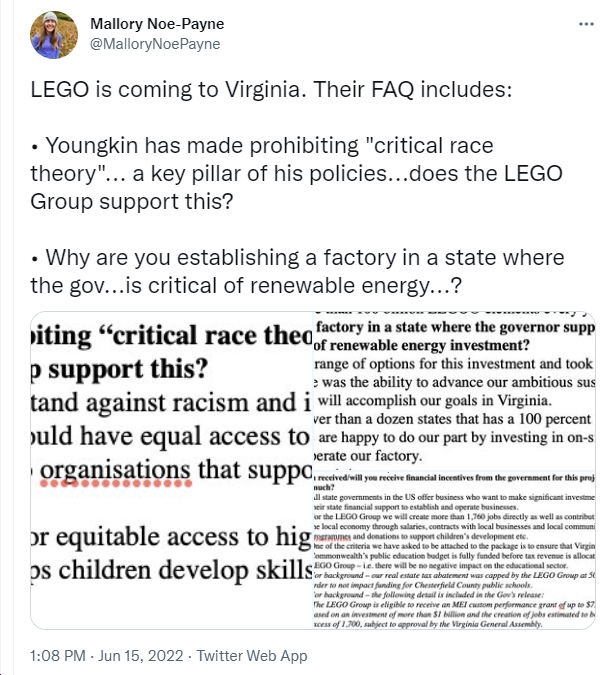