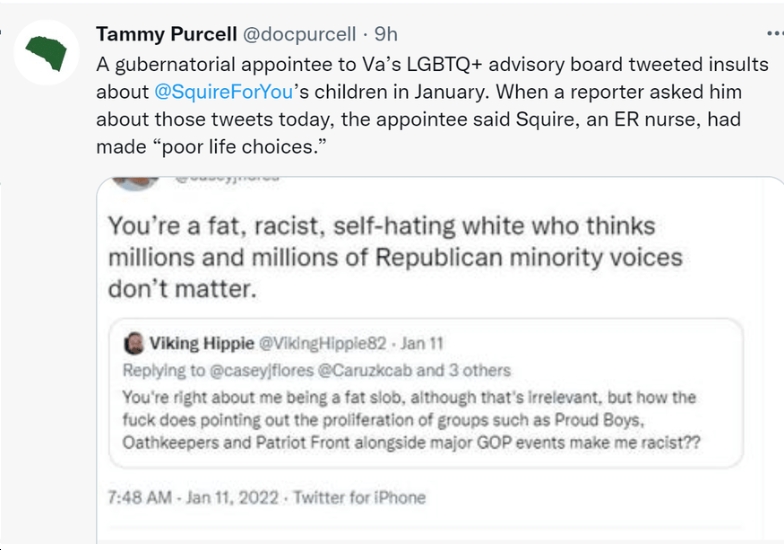 Well, in case you thought the story about my kids being attacked by a Glenn Youngkin appointee couldn’t get any worse, I have unfortunate news for you this morning. The Richmond Times Dispatch reached out to him yesterday, to ask him about hunting down pictures of my 5, 8, and 14-year old kids and attacking them online.

His on the record response? Well, if I didn’t want my kids to be attacked, I should have made better life choices.

I know I said this yesterday, but it’s worth revisiting: it’s blatantly obvious that Governor Youngking and the leadership of the Republican Party here in Virginia don’t consider this type of behavior a “deal breaker”.

Honestly, this is bigger than me, my House of Delegates race, or my family. This is a measure of where we are as a nation. The Republicans are okay with bullying children & dehumanizing people. They no longer believe there is any benefit to them to act with common decency. They’d rather go after kindergartners than even have to admit they made a mistake, or hold one of their own accountable.

And don’t forget- roles reversed, this would be a national news story. Tucker Carlson would be screaming about it every night. Bill Maher would have a smirking soliloqouy saying “see, this is what ‘wokism’ gets you!” There’d be breathless articles in the New York Times about how Democrats were facing electoral oblivion for being associated with such behavior.

But when a Republican does it? I mean, come on. You can’t hold evvverrryyy decision made by a statewide elected official and party leader as being representative of other people! ¯\_(ツ)_/¯

This is way beyond one sad man who lashes out so desperately when backed into a rhetorical corner that he’ll hunt up pictures of someone’s kids and attack them. If there are no consequences for that, if they’re okay with going after someone’s kids unapologetically…

Kellen Squire is an emergency department nurse from Charlottesville, Virginia, running to flip the bluest legislative seat still held by the Virginia GOP.