See below for a press release from Appalachian Voices and Protect Our Water, Heritage, Rights (POWHR), as well as some thoughts on Gov. Glenn Youngkin’s absurd comments to FERC.

Washington, D.C. —  On Friday, July 29, the public comment period closed for Mountain Valley Pipeline’s (MVP) request to extend the project certificate granted by the Federal Energy Regulatory Commission (FERC) by an additional four years. Submissions asking for denial include a letter from 27 Virginia state legislators, a sign-on letter with 270 participating organizations, and thousands of individual comments. Commenters cited the years of harm the MVP has brought to West Virginia and Virginia communities and water resources.

The Certificate of Public Convenience and Necessity is the jurisdiction of FERC under the Natural Gas Act and serves as the overarching approval for an interstate gas pipeline project, and it is required before construction can commence. This is the second time that Mountain Valley Pipeline has requested an extension of the certificate, after receiving a two-year extension from FERC in 2020.

Since construction began in 2018, MVP has been cited for hundreds of water quality violations in West Virginia and Virginia, racking up millions of dollars in fines. In addition to water impacts, pipeline opponents have raised concerns about air emissions from compressor stations, safety issues, lack of need, and the impact of building out more fracked-gas infrastructure at a time when decarbonization is crucial to addressing the climate crisis.

“We, the people directly impacted by the climate nightmare known as the MVP, and hundreds of national organizations demand FERC deny MVP’s four-year extension request. There is overwhelming health, ecological, climate, and economic evidence that the MVP has no place in our communities, especially during a climate crisis. Our grassroots movement and national allies are all hands on deck at this critical moment to stop the MVP and focus all our energy on bold climate action that secures the livable future we deserve,” said Grace Tuttle of leading frontline group, the Protect Our Water, Heritage, Rights (POWHR) Coalition.

“There is not a way forward where Mountain Valley Pipeline can complete construction legally, safely, and without irreparably harming communities, endangered species, pristine mountain forests and sensitive headwaters,” said Ridge Graham, North Carolina Field Coordinator for Appalachian Voices. “This project has been flawed and unnecessary since its initial announcement in 2014. A four-year extension would give the company a total of nine years to complete construction when the original CPCN’s term was three years. Enough is enough. FERC should deny the requested extension.”

Appalachian Voices is a leading nonprofit advocate for a healthy environment and just economy in the Appalachian region, and a driving force in America’s shift from fossil fuels to a clean energy future. For more information, visit: appvoices.org

Protect Our Water, Heritage, Rights (POWHR) is an interstate coalition leading the fight to stop the Mountain Valley Pipeline. The coalition includes individuals and groups from counties in Virginia and West Virginia dedicated to protecting water, land, and communities from fossil fuel expansion and environmental injustice. For more information, visit our website: powhr.org.

Just a few problems with Youngkin’s comments to FERC:

1) a natural gas pipeline is NOT “best-in-class” energy; that’s just laughable
2) natural gas isn’t “innovative” or “advanced technology”; it’s very old, antiquated, dirty technology that’s been superseded in almost every way by clean energy
3) as for “affordable”/”low-cost” energy, the best solutions are increasingly solar, wind and of course energy efficiency…not dirty, destructive, expensive fossil fuels
4) Youngkin doesn’t mention methane leakage in the fracking process and in natural gas transportation, processing, etc. Nor does he mention the fact that methane is a potent greenhouse gas that largely destroys any enviro advantage gas might have over coal
5) Natural is more a “bridge to nowhere” than a “bridge fuel”
6) It’s highly doubtful that this project is actually “94% complete”
7) There’s no mention of the climate crisis, which is of course urgent and existential, in any of this verbiage
8) Strictly from an economic/business point of view, building new fossil fuel infrastructure is a crazy investment, because it’s highly likely the infrastructure will be “stranded” many years before its investment value is recouped. Dumb. 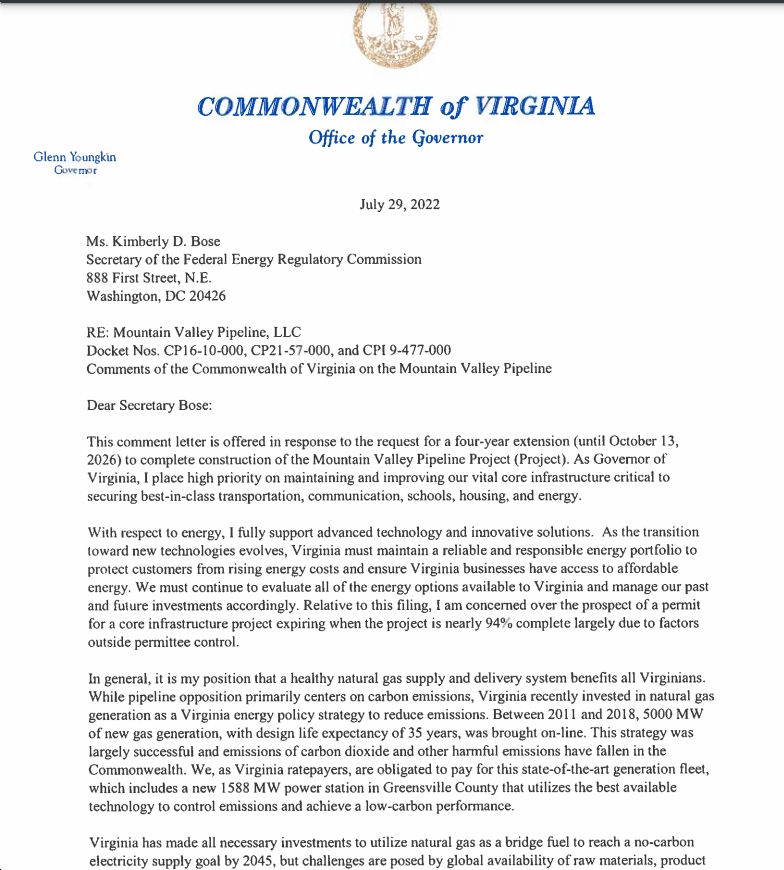 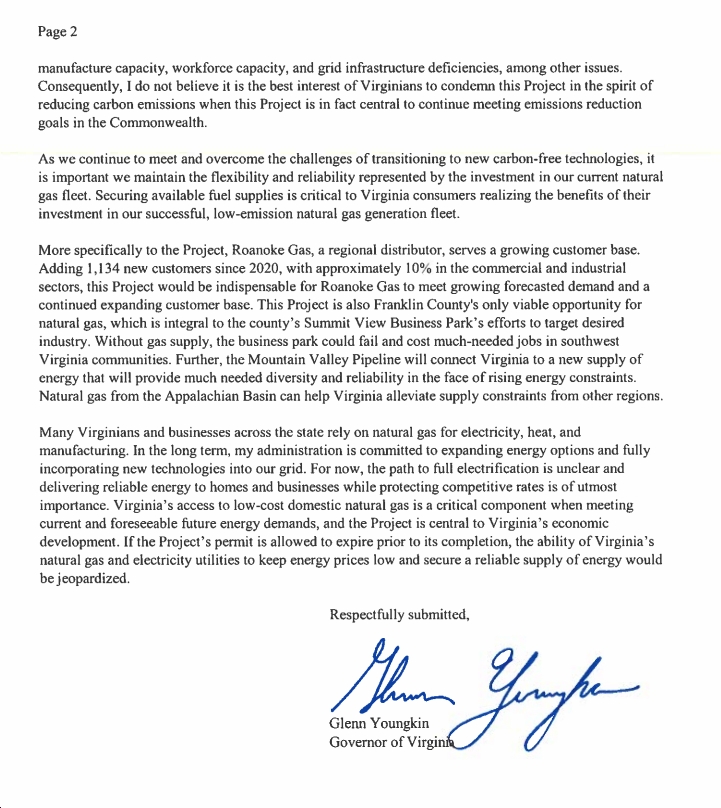 Twenty-seven Virginia Legislators Urge FERC to Deny MVP Certificate Extension
ROANOKE, VA – On behalf of their constituents, and members of the public who would be adversely impacted by continued harms from the Mountain Valley Pipeline, Delegate Sam Rasoul and Senator John Edwards led a coalition of 27 state legislators calling for denial of Mountain Valley Pipeline’s request to extend their certificate with the Federal Energy Regulatory Commision (FERC) by an additional 4 years.
The letter states “For years, we have heard from residents and constituents about the real and significant harm the MVP has inflicted on their local streams and rivers, property, drinking water, and quality of life.”
The current certificate expires in October 2022. MVP’s request would triple the amount of time originally approved by FERC. “This pipeline has continued to cause immense harm and to extend this certificate is to say that continuing to cause more damage is acceptable. FERC needs to deny this extension and protect those living along its path,” said Rasoul.
A copy of the submitted letter can be found here.
Co-signers on the letter include Delegate Sam Rasoul, State Senators John Edwards, Ghazala Hashmi, Creigh Deeds, Jennifer Boysko, Scott Surovell, Jeremy McPike, Chap Petersen, and Jennifer McClellan and Delegates Michelle Maldonado, Dawn Adams, Sally Hudson, Betsy Carr, Irene Shin, Rodney Willett, Patrick Hope, Elizabeth Bennett-Parker, Wendy Gooditis, Jackie Glass, Clinton Jenkins, Kaye Kory, Elizabeth Guzman, Nadarius Clark, Kelly Convirs-Fowler, Shelly Simonds, Kathy Tran and Mark Keam.
Significant health and environmental concerns have been raised for years about the Mountain Valley Pipeline. After over 300 violations of water quality during construction, the unneeded, destructive project was subject to a lawsuit, resulting in an over $2M in fines. The MVP mainline also faces many existing hurdles, as it is currently missing federal authorizations from the U.S. Forest Service, Bureau of Land Management, U.S. Fish &  Wildlife Service and the U.S. Army Corps of Engineers.