I was wondering what Youngkin might be up to last week, given that his public schedule was mostly “No Public Events Scheduled.” I figured it had to be something political, probably out of state, and likely related to his explorations of a possible 2024 presidential candidacy.  Well now, reporter Robert Costa has confirmed that that’s exactly what Youngkin was up to: hobnobbing with right-wing “think tank” people and “the party’s major donors” at a “private AEI retreat” in Jackson, Wyoming. See below for screenshots of Costa’s tweets, including the following nuggets:

OK, so first of all, on that last bullet point, what on earth “movement” is Youngkin talking about? In fact, Youngkin won a VERY narrow victory the year after a Democrat was elected president (and after that Democrat, Joe Biden, saw his approval rating decline into the low-to-mid 40’s by the fall of 2021). As anyone who’s followed Virginia politics knows, it’s quite common for Virginia to elect someone of the OPPOSITE party the year after the presidential election. For instance, in 2001, Virginia elected Democrat Mark Warner by five points, the year after Republican George W. Bush was first elected president. Then in 2009, just one year after Democrat Barack Obama won Virginia by six points, Republican Bob McDonnell won the governorship by a massive 18 points (!!!) over Democrat Creigh Deeds. And, of course, the year after Trump was elected (albeit by the Electoral College, certainly not by the popular vote!) president in 2016, Democrat Ralph Northam crushed Republican Ed Gillespie for governor by 9 points (!). So actually, if anything, Youngkin *underperformed* the historical tendency in Virginia. But sure…DO go on about how he had some sort of “movement” behind him, blah blah blah.

Now, even if we grant that Youngkin had some sort of “movement” behind him, what was it exactly, other than an iteration of the classic Republican strategy of stoking anger and division, tapping into fears of “the other” (in Youngkin’s case, “Critical Race Theory” served as the 2021 version of Lee Atwater’s racist “Southern Strategy,” with Youngkin also adding in fearmongering about “transgender kids in bathrooms,” etc.). Youngkin also had a personal fortune, which meant that he could spend as much or more as Democrat Terry McAuliffe. And, of course, Youngkin was able to use the right-wing “echo chamber” to get out his more extreme/hard-edged/nasty messaging, while saving his “sweater-vest/suburban basketball dad” bullshit for TV ads and gullible, lazy, incompetent, “both-sides”/false equivalence “journalists.”  Does all of that crap add up to a “movement?” Maybe in Youngkin’s mind, but certainly nowhere else!

As for the right-wing donors’ assessment of Youngkin that he is “like Pence but without tensions with Trump,” that’s very revealing – and not in a good way.  The fact is, Pence is a hard-edge, far-right social conservative/theocrat and Koch brothers tool who licked Trump’s boots for four years, before doing what he was constitutionally REQUIRED TO DO on January 6, 2021! Anyway, so they’re saying Youngkin’s like THAT, but doesn’t have the “tensions with Trump,” stemming from Trump not caring – or even encouraging – his crazed shock troops to “hang Mike Pence?” Alrighty then.  And yes, Youngkin is clearly more than “willing to go right on social issues,” something that shouldn’t be surprising given how tight he is personally and politically with Ted Cruz, and given how Youngkin has stated that Ron DeSantis is a role model for him, and how “President Trump represents so much of why I’m running.”

As for coming from “the finance world,” we know what THAT involved – stuff like this (“BREAKING: Gov. Youngkin accused of lining his own pockets at the expense of police officers and firefighters!”). And they think that’s a GOOD thing? Of course, this is the American Enterprise Institute, which has had close ties with the Koch brothers, “aligned itself with the tobacco industry on many issues,” has cast doubt on global warming, and in general “advocates for lower taxes, fewer protections for consumers and the environment, and cuts to the social safety net.” Sound like a group that would be simpatico with Glenn Youngkin, or what?!? Anyway, the bottom line is that Youngkin is most certainly exploring a 2024 presidential campaign, assuming Trump is somehow out of the picture (e.g., in prison? in exile in Russia or Saudi Arabia or wherever?), so expect more of these weeks when his schedule has lots of “No Public Events” listed… 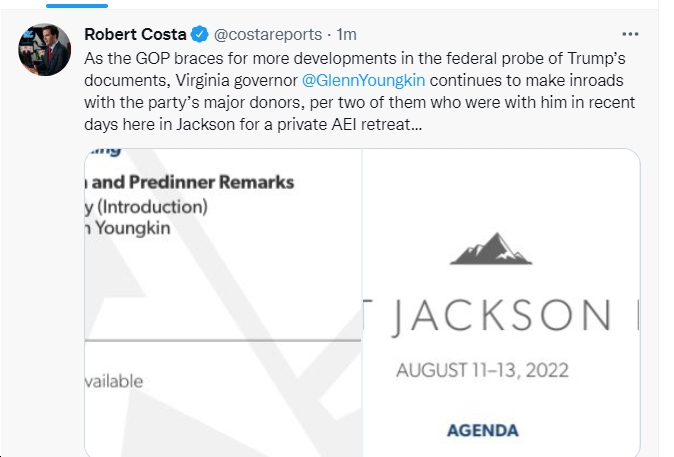 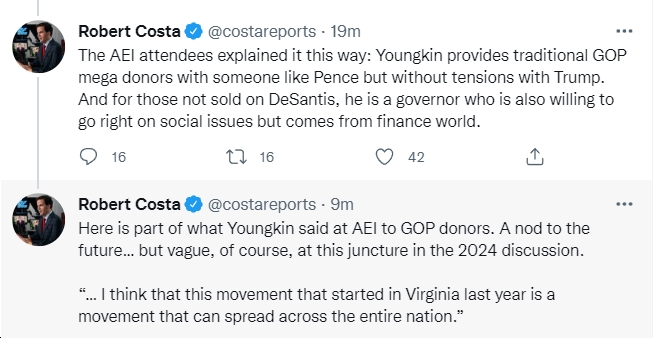 Expect candidate announcements and a special election date to be set soon after tomorrow's funeral for Rep. Donald McEachin (D-VA04). Likely candidates for Dems are @JennMcClellanVA and @delegatebagby, with @lashrecseaird also a possibility. https://bluevirginia.us/2022/12/who-are-the-possible-likely-democratic-contenders-in-va04-will-youngkin-set-an-early-special-election-date-or-try-to-keep-seat-vacant-for-months

"Planned Parenthood Advocates of Virginia Endorses @HollySeiboldVA for HD35 Special Election: Seibold will be a Champion for Reproductive Health Care and Rights in Virginia" https://bluevirginia.us/2022/12/tuesday-news-five-things-to-watch-at-the-biggest-biodiversity-summit-republicans-are-stuck-with-an-insurrectionist-at-war-with-democracy-off-the-rails-alito-jokes-about-black-kids-in#comment-6058732990