Fresh off his trip to Michigan to campaign for far-right extremist Tudor Dixon (and to “make Trump look like Travolta,” LOL), Glenn Youngkin is now headed off to Maine, to campaign for former Gov. Paul LePage (R). So what’s the deal with LePage, you ask? Given that all those WaPo articles last year assured us – albeit completely falsely – that Youngkin was some sort of “moderate” in a sweater-vest, you’d think that LePage would also be a “moderate” Republican, not an unhinged, extremist, “semi-fascist,” bigot, whatever? Except…that’s right, yet AGAIN, Youngkin will be campaigning for a right-wing wackadoodle. Here just a short list of LePage’s many career “highlights”:

On and on it goes with this extremist, racist, homophobic, conspiratorial, unhinged fascist. The question is, why would anyone in their right mind want to actually support him, let alone campaign for him?  Of course, Youngkin’s the same guy who just campaigned for an extremist candidate in Michigan who said, when asked “ whether a 14-year-old rape victim should be allowed to get an abortion,” that “I’ve talked to those people who were the child of a rape victim and the bond that those two people made, and the fact that out of that tragedy, there was healing through that baby.” So yeah, this is exactly who and what Glenn Youngkin is; judge him by his ACTIONS, including the people he CHOOSES to associate with and support for high elective office… 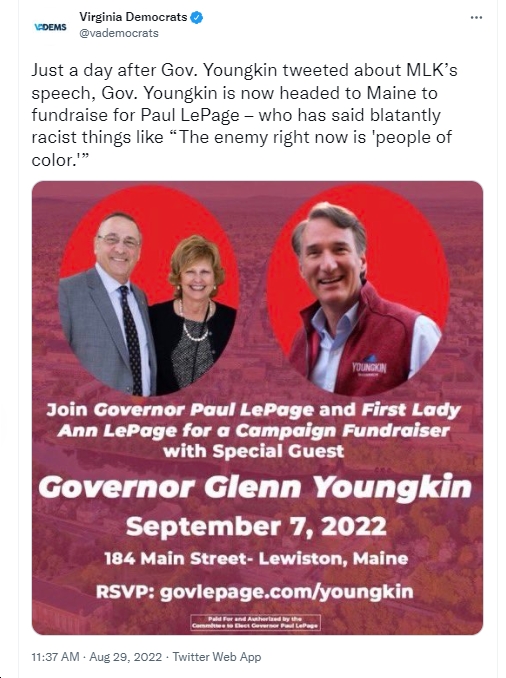