When it comes to reporting and editorializing on Virginia politics, it’s amazing what a contrast in quality there is between the  mega-billionaire-Bezos-owned Washington Post (which, despite its vast resources, does a horrendous job of covering Virginia, such as whitewashing Youngkin during the 2021 campaign, barely even mentioning the Republicans’ extremist LG and AG candidates, etc.) and the student-run-on-a-relative-shoestring Cavalier Daily (which, despite its tiny size compared to the WaPo, does a far better job of digging for stories, writing about them with clarity, and calling things what they actually are).

The latest examples of the great job being done by the Cavalier Daily’s student journalists include: Ellis at center of controversy over eugenicist speaker while at U.Va., archives show (“Though Ellis’ appointment to the Board has been controversial, his time at U.Va. appears to have been as well”); EDITORIAL: Youngkin, this was the wrong call (“Youngkin’s appointment only confirms what he has already demonstrated so far through his governorship — a blatant disregard for the University’s core values.”); and now EDITORIAL: Get your facts straight Mr. Youngkin (“Governor Glenn Youngkin, start doing your job”).

Definitely read the entire editorial, “Get your facts straight Mr. Youngkin” – it’s superb. Meanwhile, here are a few highlights (bolding added by me for emphasis):

Brilliant. Now, if only the corporate media – starting with Jeff Bezos’ Washington Post – could (or would) write like this.

P.S. On a related note, see below for a statement by the UVA Democrats, calling on Youngkin’s appointee, Bert Ellis, to resign  from the UVA Board of Visitors or be removed by Youngkin. 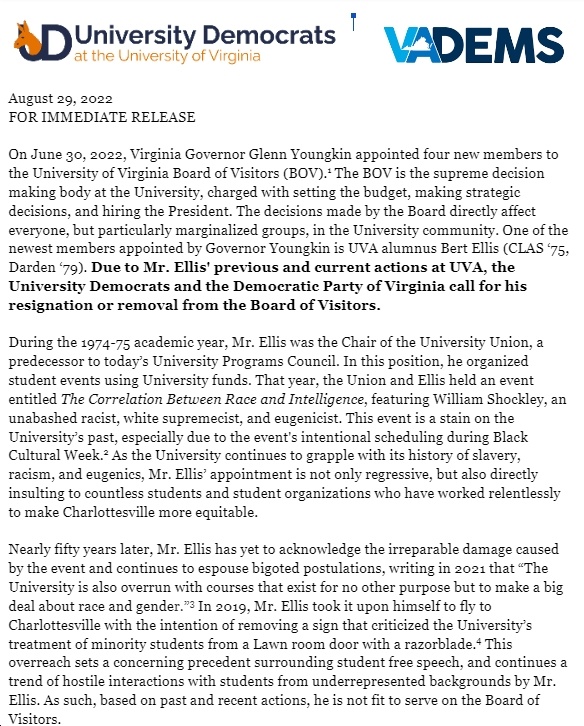