Clearly, our democracy is in deep trouble these days…in almost more ways than one can count. Just for starters, we’ve got major issues with: how districts are drawn (e.g., partisan gerrymandering run amok, the lack of multi-member House districts; the amount of money (and where it comes from) in politics; the highly skewed (towards rural/”red” states) nature of the U.S. Senate; the way we elect our president (“first-past-the-post,” where a candidate can win with a plurality not a majority; also the deeply flawed Electoral College, etc.); how voters get their information (e.g., social media is horrendously flawed, as is the political media in this country, in a variety of ways, including being highly conducive to “echo chambers” on the one hand, “both sides-ism”/false equivalence on the other); the percentage of people who don’t vote at all; the lack of some sort of “Ranked Choice Voting” system; a badly/fatally flawed (e.g., at this point it’s arguable whether or not it’s even legitimate at all) Supreme Court; and much more.

So what do we do about this situation?  See below for an interesting thread on the subject, and feel free to add your own ideas in the comments section. The ideas I’ve bulleted are ones that particularly intrigue me…but certainly not exclusive (I’m sure there are many more!).

I’d add that Congress needs to pass laws that seriously regulate social media companies  – and also propaganda networks masquerading as “news” – to rein in the flow of dangerous disinformation, make people liable for spewing out lies and threats, cut back on monopolistic market power, etc.  Oh, and we need to reduce income inequality BIG TIME, by having a steeply progressive tax code – including a significant (50%? 60%? 70%? higher?) wealth tax for anyone worth more than $100 million or whatever. Oh, and of course ditch the absurd “filibuster” in the U.S. Senate. 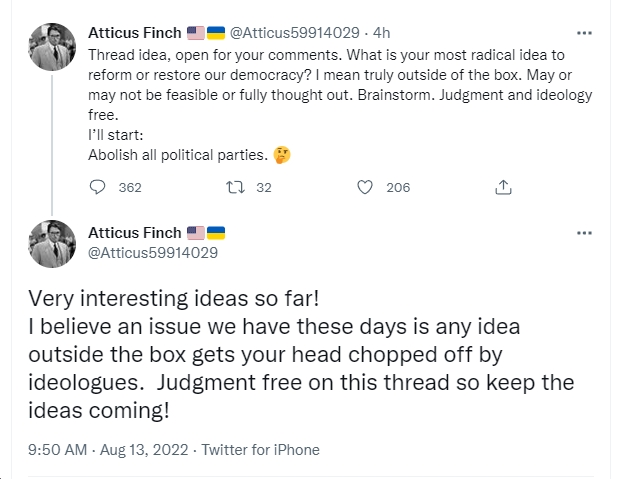