Washington, DC – U.S. Representatives Jennifer Wexton, Don Beyer and Gerry Connolly, and Senators Tim Kaine and Mark Warner (all D-VA) issued the following statement on the release of U.S. citizen and Virginia resident Asim Ghafoor from detention in the United Arab Emirates (UAE), where he had been since July 14, 2022.

“Thanks to the courageous work of many, Asim Ghafoor is now home with his family.

“Since he was arrested on July 14, we have been outspoken advocates for Asim’s fair treatment and due process during his imprisonment and worked closely with his loved ones to raise awareness of his ordeal.

“Asim has clearly touched the lives of many, and we are relieved that he is free and back in Northern Virginia with his family.”

Asim Ghafoor is a board member for the nonprofit organization Democracy in the Arab World Now (DAWN) which advocates for democratic reforms in the Middle East and a beloved and active member of the local Muslim community in the Northern Virginia region. He also represented Jamal Khashoggi, who was brutally murdered by Saudi officials in 2018. Asim Ghafoor was detained by UAE authorities on July 14 while transiting Dubai International Airport. He was convicted in absentia and sentenced to three years in prison without being provided any notification regarding his charges. His prison sentence was overturned by an Emirati court earlier this week, permitting him to return home to his family. 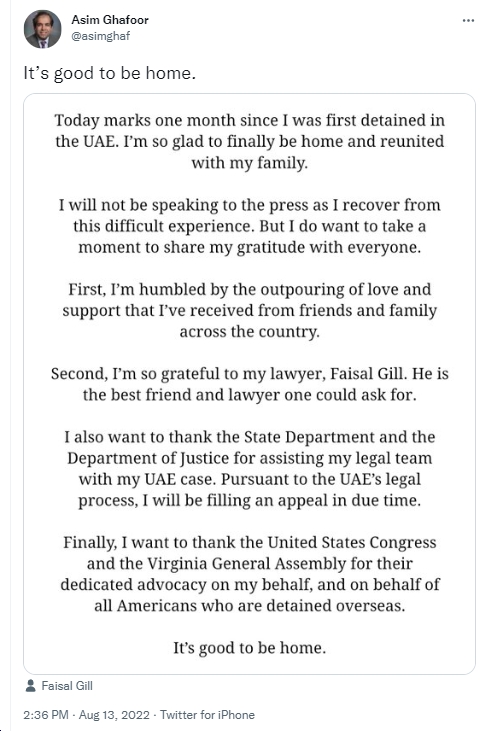