Back in 2003 – almost twenty years ago – I asked the question, “Is America Drifting Towards Fascism?” At the time, I looked at a checklist of key fascist and authoritarian characteristics – “Nationalism, super-patriotism, and aggressive militarism”; “Anti-modern and anti-liberal attitudes”; “A pervasive climate of fear and hysteria”; “Identification of enemies/scapegoats”; “Labeling of political opponents as traitors”; “Theocratic leanings at the expense of pluralism or church-state separation”; etc. – and found almost all of them prevalent, to varying degrees, in the Republican Party of 2003. Disturbing.

And now, in 2022, as President Biden talked about in his speech the other night in Philadelphia, “as I stand here tonight, equality and democracy are under assault. We do ourselves no favor to pretend otherwise…Donald Trump and the MAGA Republicans represent an extremism that threatens the very foundations of our republic.” President Biden is also, correctly, calling out MAGA/Trumpism as “semi-fascism” (although really, we can just drop the “semi” part)…and the MAGA/Trumpists/semi-fascists are responding exactly as you’d expect, for instance with Virginia Gov. Glenn Youngkin – whose political role models are people like Ted Cruz, Ron DeSantis, Greg Abbott, Donald Trump, etc. – hysterically (and predictably) – called President Biden’s speech “divisive.” That’s right, Youngkin actually believes that CALLING OUT fascism is what’s “divisive,” not the fascism itself. And yes, this is the same guy who the media worked 24/7 last year to portray as some sort of “moderate” or “mystery date.” Massive media FAIL.

With that intro, check out this brilliant – and disturbing – new Twitter thread by former Chicago Tribune & Sun-Times editor Mark Jacob, which begins:

“With all the arguments over whether MAGA Republicans are fascists, I reread William Shirer’s ;The Rise and Fall of the Third Reich’ to see how much the rise of Hitler and the rise of MAGA smell similar. Conclusion: They do. This thread lists 10 ways. Please take a look.” 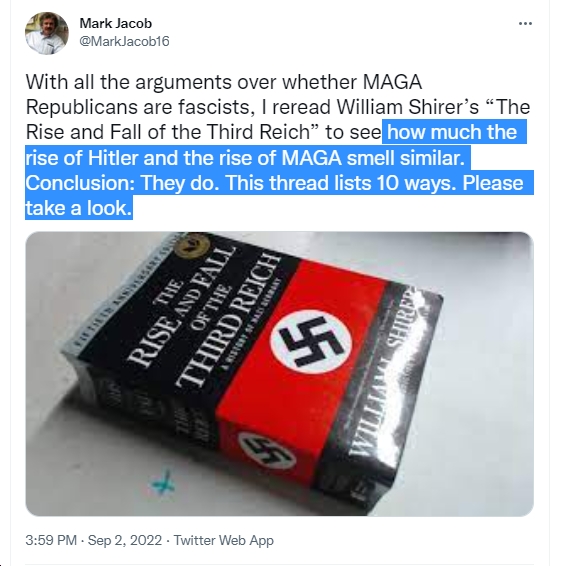 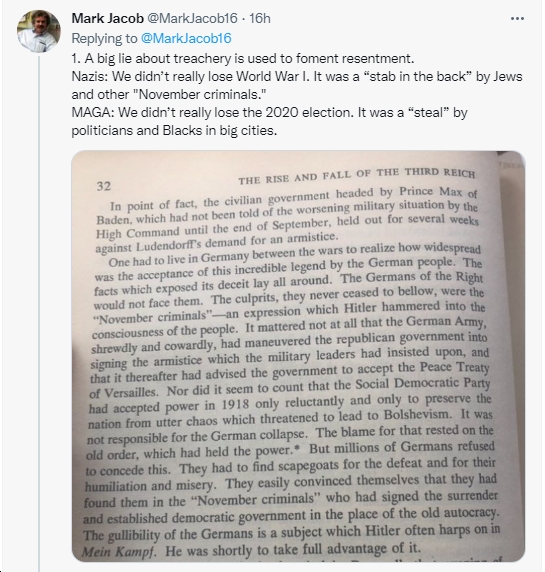 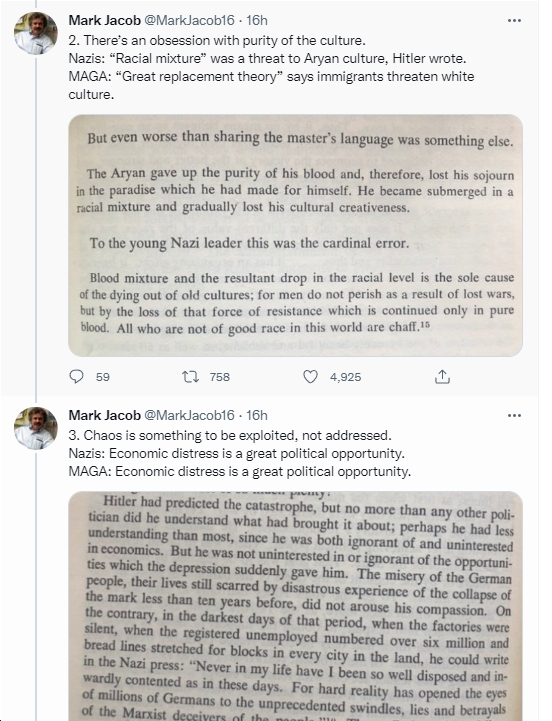 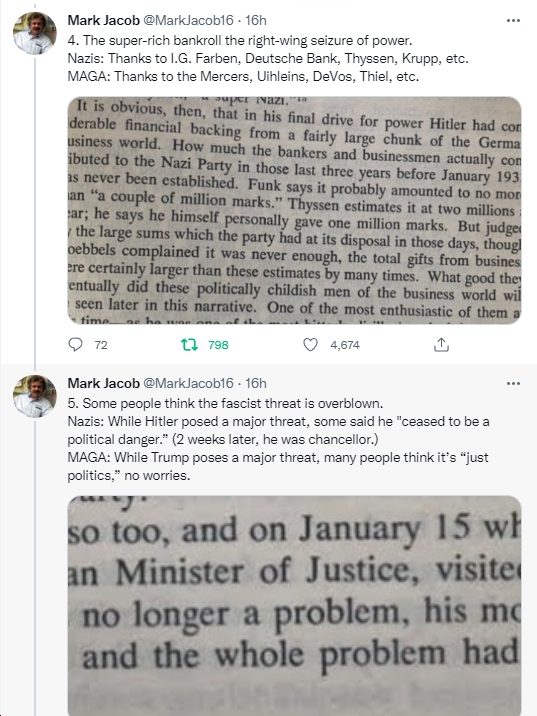 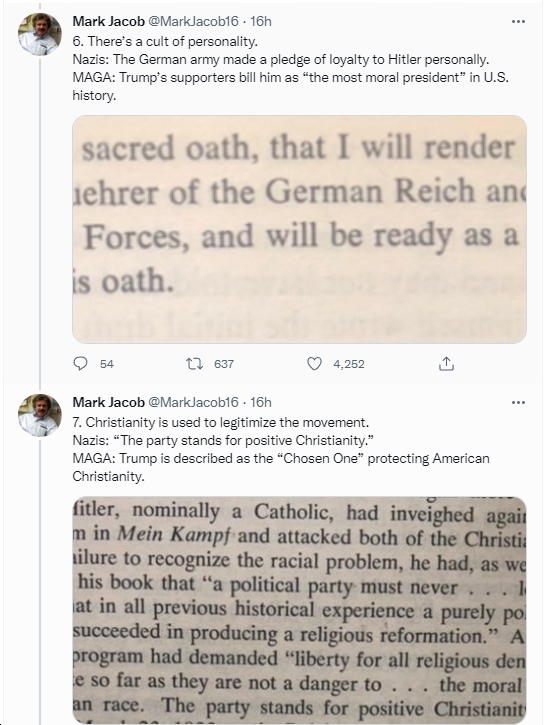 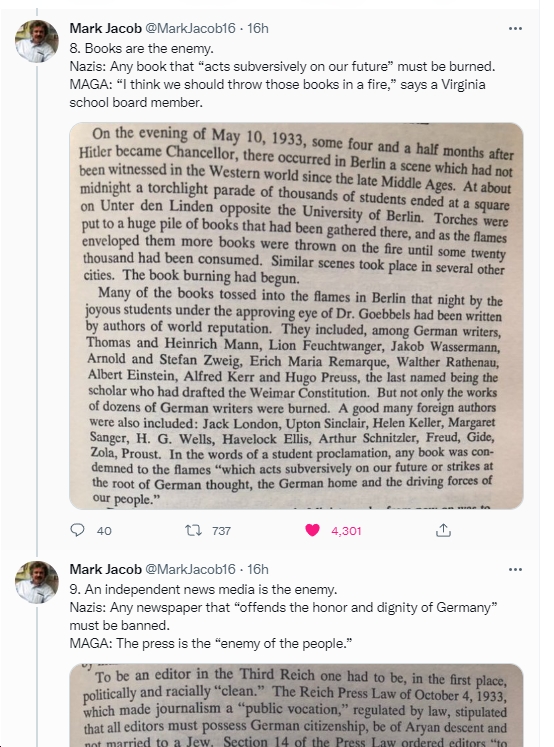 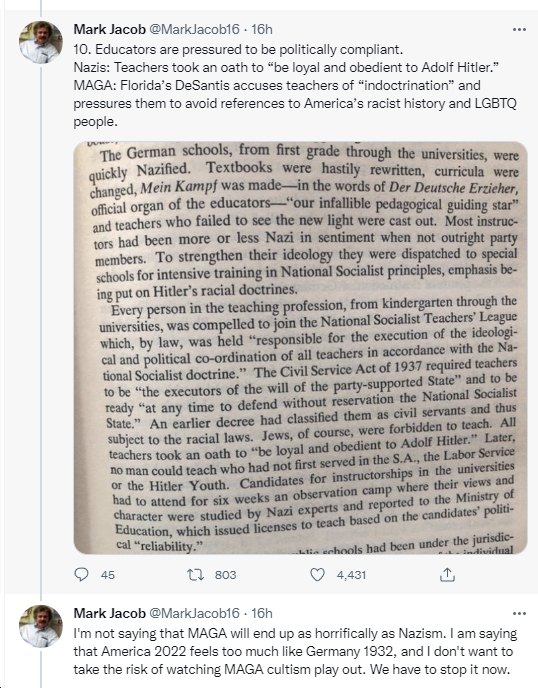