Ugh, this is awful. Rest in Peace, Rep. McEachin.

Statement on the Passing of Congressman A. Donald McEachin

“We are all devastated at the passing of our boss and friend, Congressman Donald McEachin. Valiantly, for years now, we have watched him fight and triumph over the secondary effects of his colorectal cancer from 2013. Tonight, he lost that battle, and the people of Virginia’s Fourth Congressional District lost a hero who always, always fought for them and put them first.

“Until a new representative is elected, our office will remain open and continue to serve our constituents.

“The family asks for privacy at this time. Arrangements will be announced over the next few days.”

DPVA Statement on the Passing of Representative A. Donald McEachin

Richmond, VA – The Democratic Party of Virginia released the following statement on the news that Virginia Congressman A. Donald McEachin passed away:

“We are deeply saddened to learn of the passing of Congressman Don McEachin – a dedicated statesman and proud Virginian. The loss of the Congressman is a tragedy to our Country and Commonwealth.

“Donald McEachin was a pioneer and leader in Virginia. Serving in the House of Delegates, the State Senate, and as a Congressman, he embodied the meaning of public service — fighting for the most vulnerable citizens, defending the rights of all Virginians, and being a steadfast champion for the environment.

“A person of faith, Donald embodied the definition of service. He had a kind and generous heart; and for so many people, he was a voice of reason, and a man who listened to you, always showing compassion and care. He was wealthy in the only way that truly matters, with an abundance of friends and allies who loved and respected him. We could always count on him to give sound advice and guidance. His voice will be deeply missed.

“On behalf of a grateful Democratic Party of Virginia, we are thankful for the life and legacy of Congressman Donald McEachin and extend our sincere sympathies to his wife, Colette, and the entire McEachin family.” 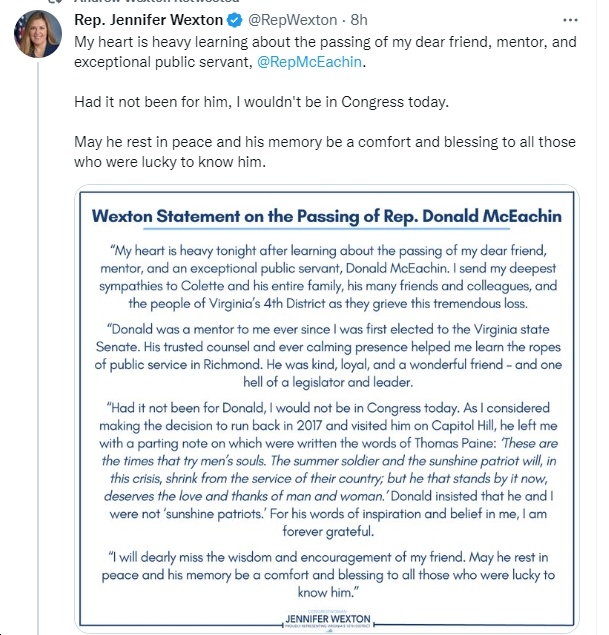 “Tonight, I am mourning my friend, colleague, and mentor Congressman Donald McEachin. He was a good man who endeavored to make others feel important and heard whether in the courtroom, the General Assembly, the U.S. Congress, or simply in a quiet moment. He brought his passion for people, his sense of humor, and his abiding faith in God to his work every day — and he was a relentless advocate for those who needed a voice, our natural resources, and the people he represented.

“Congressman McEachin’s passing leaves a deep void here in Virginia. But his example of leadership, his generosity of spirit, and his commitment to doing right in the world and rectifying injustices will endure for everyone whose lives he has touched — including mine. He will be greatly missed across the Commonwealth and on Capitol Hill. Adam and I are keeping his wife Colette, his daughters, and his beloved grandson in our prayers — and we are thinking of his family during this difficult time as we remember A. Donald McEachin’s legacy.

“Godspeed my friend, my brother, and my neighbor.”

I met Donald McEachin in 1985–we became fast friends. A gentle giant, a compassionate champion for underdogs, a climate warrior, a Christian example, an understanding dad, a proud husband, a loyal brother. “Teach us how short our life is, so that we may become wise.” Psalm 90:12.

“Donald and Colette McEachin have been wonderful friends to me and Lisa for more than thirty years. We often bonded over stories and laughs about our mutual challenges raising families with three strong-willed daughters.

“Up until the very end, Don was a fighter. Even though he battled cancer and faced other trials in recent years, he never lost his focus on social and environmental justice. Tonight, Virginia has lost a great leader and I have lost a great friend.”

Wexton Statement on the Passing of Rep. Donald McEachin

Sterling, VA – Congresswoman Jennifer Wexton (D-VA) issued the following statement on the death of her friend, mentor, and colleague Congresswoman A. Donald McEachin:

“My heart is heavy tonight after learning about the passing of my dear friend, mentor, and an exceptional public servant, Donald McEachin. I send my deepest sympathies to Colette and his entire family, his many friends and colleagues, and the people of Virginia’s 4th District as they grieve this tremendous loss.

“Donald was a mentor to me ever since I was first elected to the Virginia state Senate. His trusted counsel and ever calming presence helped me learn the ropes of public service in Richmond. He was kind, loyal, and a wonderful friend – and one hell of a legislator and leader.

“Had it not been for Donald, I would not be in Congress today. As I considered making the decision to run back in 2017 and visited him on Capitol Hill, he left me with a parting note on which were written the words of Thomas Paine: ‘These are the times that try men’s souls. The summer soldier and the sunshine patriot will, in this crisis, shrink from the service of their country; but he that stands by it now, deserves the love and thanks of man and woman.’ Donald insisted that he and I were not ‘sunshine patriots.’ For his words of inspiration and belief in me, I am forever grateful.

“I will dearly miss the wisdom and encouragement of my friend. May he rest in peace and his memory be a comfort and blessing to all those who were lucky to know him.”

Heartbroken to learn of Don McEachin’s passing. A noble friend, husband, and father. An environmentalist, civil rights advocate, faithful public servant, and a man of consequence. There was no better ally to have. I will miss him terribly.

I served in the General Assembly with Donald McEachin for over 20 years, watching him make history as the first ever African American nominee for Attorney General of VA in 2001 before he went to Congress. Hearing the news of his death sent a shock of pain through me tonight.

“Congressman McEachin was a brilliant, compassionate human being. His love for humanity was always uppermost in his work, whether on civil rights, the environment, energy, or voting rights. His is a voice that will surely be missed as will his very presence. This is a giant loss to our Commonwealth.”

“Our lives will not be the same without him and we extend our sincere condolences to his family and all who knew and loved him during this difficult time.”

Our hearts are heavy tonight after hearing the news that Congressman McEachin passed. We are grateful for the more than 26 years in service of the people of Virginia and the United States of America. His family is in our thoughts today. Rest in Peace. pic.twitter.com/61JvVV8NlC

It is with the deepest sadness that I learned of the passing of my colleague and friend @RepMcEachin. My full statement below. https://t.co/tQR5bqrZua

I’m heartbroken to hear this devastating news about my friend ⁦@RepMcEachin⁩ from Virginia.

He was a foot soldier for truth & justice.

He fought so valiantly against cancer and will be forever missed! #RestInPeaceMyFriend
https://t.co/Scb50rbMzw

I am so terribly sad to hear the news of the passing of my good friend Congressman Donald McEachin. Always a compassionate, honorable man who put others first. Rest well my friend.

I am deeply saddened by the loss my friend @Donald_McEachin. I have worked with him since our days in the Va House of Delegates and have know him to be a gently giant in fighting to ensure everyone has a level paying field, my prayers to his family & loved ones. He will be missed

Proud to call Congressman Donald McEachin my friend for over 20 years. Such a tremendous loss for the residents of the 4th CD and the Commonwealth as a whole.

Sending much love and strength to @Colette4rva and their children.

New Year’s Day 2023 News: “Ukraine Rings In New Year With Hope of Russia Defeat”; Kevin McCarthy “will have to make a bargain with...

Video: VA Dems Provide Update of Ballot Counting in VA04 Nomination, Say They’re About Halfway Through, Vow to Count Every Vote and Get It...

Colette McEachin Endorses Jennifer McClellan, Says She Knows Joe Morrissey Well and That VA04 “deserves to be represented by someone who will not embarrass...