Clearly, the Republican Party has been very conservative for a long time now (think back to Ronald Reagan, Newt Gingrich, Tom DeLay, the “Tea Party,” etc.). However, under Donald Trump’s “leadership,” the party lurched from conservative to an extreme far-right-“populist” party along the lines of the National Front in France, Hungary’s autocratic Viktor Orban, etc. Or, as President Biden accurately called MAGA Republicans in August, they’ve morphed into the realm of “semi-fascism.”

A case study, here in Virginia, former State Senator Glen Sturtevant (R). As I wrote back in April, this is someone who was considered to be a relatively “moderate” Republican when he first ran for State Senate back in 2015, narrowly defeating Democrat Dan Gecker in a “purple” Senate district in Richmond/Chesterfield/Powhatan, then losing reelection to Democrat Ghazala Hashmi (by a 54%-46% margin) in 2019.

Now, almost four years later, Sturtevant is is running to get back into the State Senate, this time in the Chesterfield-based SD12, a solidly “red” district which was won by Glenn Youngkin in November 2021 by 14 points (57%-43%). Sturtevant is taking on far-right/insurrectionist incumbent Sen. Amanda Chase, as well as Tina Ramirez, for the Republican nomination in 2023, and Chase is already busy attacking him as supposedly having “voted to elevate sexual orientation and gender identity to a special protected status for state employment,” and even supposedly “voted for legislation that would allow Drag Queens to be hired as teachers in our public schools,” plus “sponsored, voted in favor of, and was instrumental in passing the “so-called” Equal Rights Amendment…[that] threatens to enshrine abortion and gender fluidity into our Constitution and erase important distinctions between men and women concerning privacy, sports, and other areas.” Crazy stuff.

So how is Sturtevant responding to this attempt by Chase to paint him as not really a hardline, rock-ribbed right winger, but some sort of “moderate” or even WORSE? LOL  Is Sturtevant emphasizing that he actually IS a reasonable, sane, “moderate” Republican, while stressing that Chase is an embarrassment, an extremist, etc? Well, at least back in April, on right-wing/Trumpist radio (WRVA), that’s not at all what Sturtevant was doing. Check out the following audio clip from Sturtevant’s appearance, in which he frankly sounded like just as much of a raving, right-wing extremist nutjob as Chase. According to Sturtevant (and needless to say, ALL of this is wildly false, crazy, etc.):

“You see what’s going on, not just in Virginia but all around the country, with the pushing of the ‘woke’ agenda and Critical Race Theory…we are at this precipice now, where the left is working to indoctrinate our kids. They have oftentimes focused on other areas of culture, but the social chaos we are living through right now is directly focused on our kids. And we’ve got to fix it. We’ve got to fix it. The transgenderism, the ‘woke’ ideology that’s being pushed in our schools – boys using girl’s bathrooms, boys playing girl’s sports…curriculum. It’s extraordinarily alarming. The sexualizing of our kids; it’s got to stop. And thank god we have Gov. Youngkin there, and they’re working to root out and change a lot of these things. But…we had 8 years of Northam and McAuliffe, who basically opened wide the doors that if you want to come and teach kids leftist ideology, Critical Race Theory, these ‘woke’ concepts, Virginia’s doors were wide open to them. And we have got to undo that.  And that I think means, if you’re not going to teach kids to be patriotic, to love their country and their Commonwealth, you’re only going to teach the reading, writing, mathematics, science, English, etc. and have high standards, and you’ve got to keep out the politics, then we can’t have you teaching in our schools – period. And I think that’s going to be the next phase of this.”

WTF?!?!?!? Again – and it really shouldn’t even have to be said! – all of this is wildly false, crazy, extreme, etc. Also, again, Sturtevant had generally been considered to be a “moderate” Republican (see here for his VAPLAN 2019 score; he was one of the LEAST conservative Senate Republicans at that point). But not anymore! So either he never really was a “moderate,” or he really changed the past few years, or he’s simply willing to say ANYTHING to win the Republican nomination next year. Or all of the above? Regardless, Sturtevant is symptomatic of how far right the Republican Party has lurched in the past few years, into truly bizarre, tinfoil-hat/John Birch Society territory. Scary times.

Oh, and since April, it hasn’t gotten any better, as Sturtevant continues his lurch to the far right. See below for some examples, starting with this screenshot from his website, indicating his current, hard-right priorities: 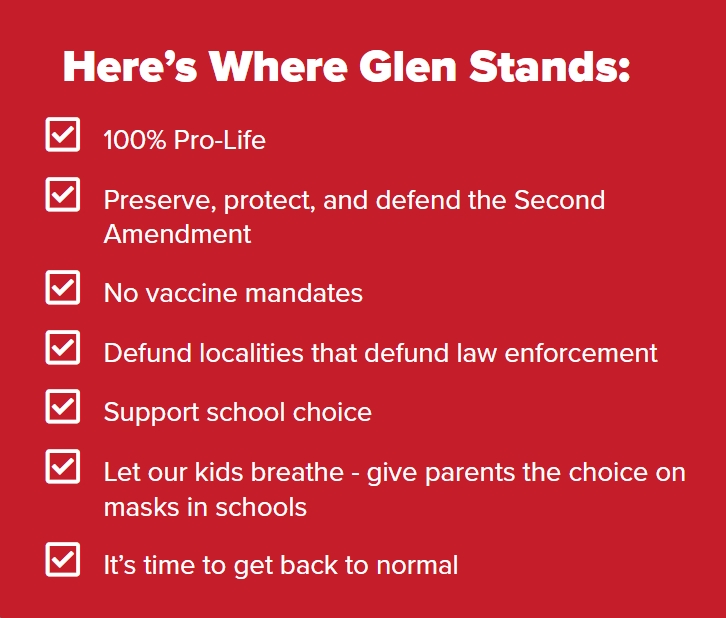 Now, compare Sturtevant’s current stances with what he was talking about back in 2015 – conservative, no question, but mostly focused on “growing our economy,” “commonsense reforms to our education system,” “limited government,” etc. 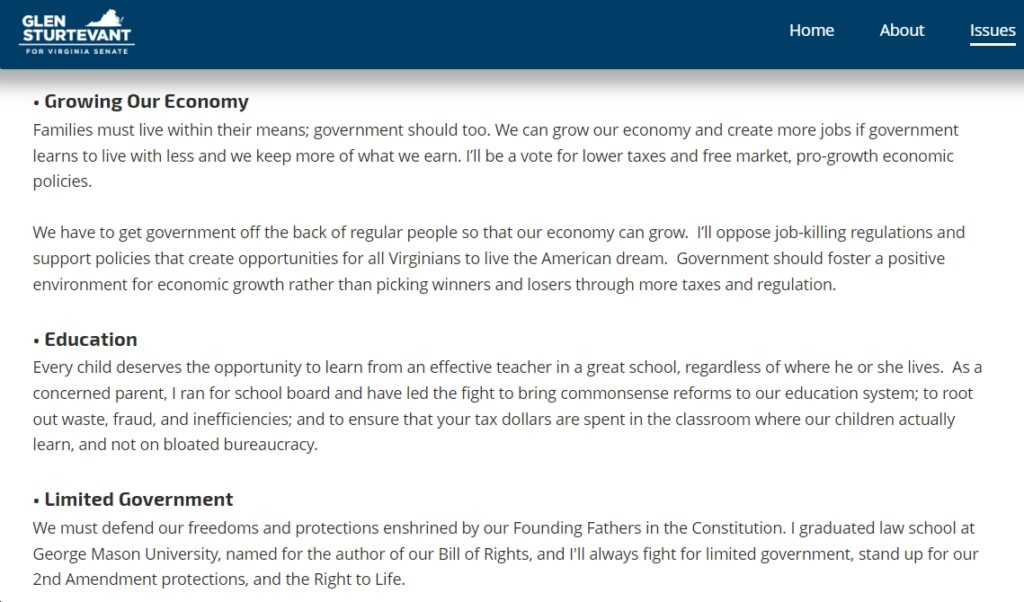 Fast forward to 2022, and here’s Sturtevant talking about working with the far-right Koch brothers’ group “Americans for Prosperity”… 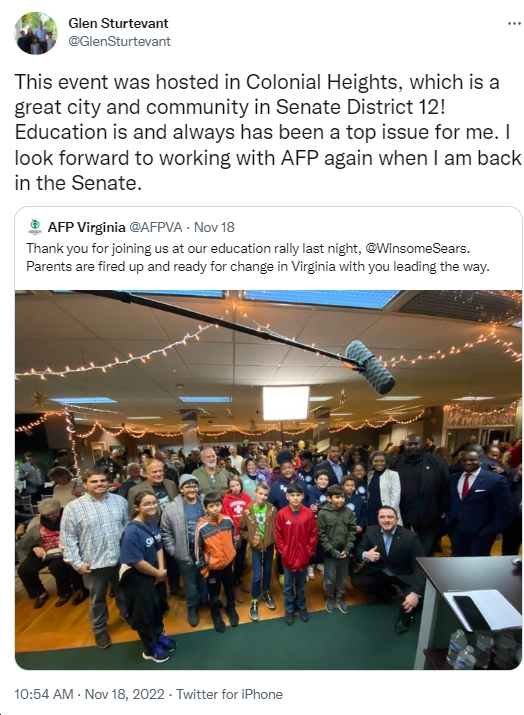 Now here Sturtevant is, ranting against the supposed “Woke agenda,” “Transgender Awareness Week,” and the supposed “War on Parents” – class rhetoric by the hard right. 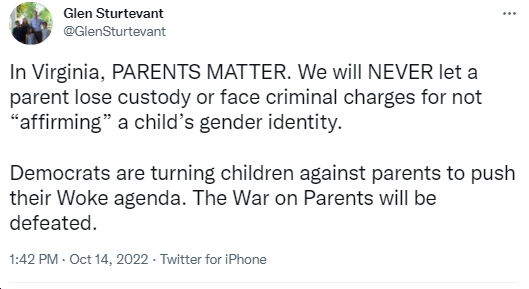 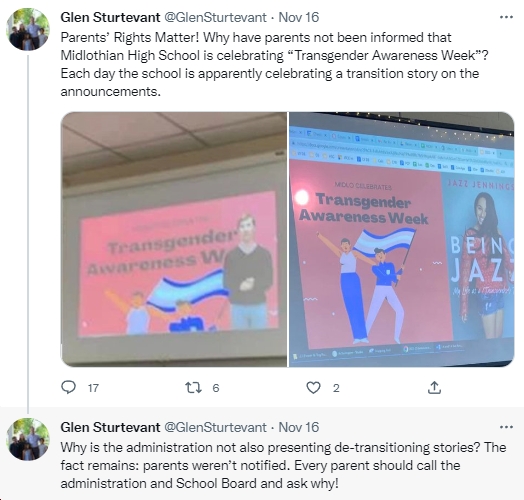 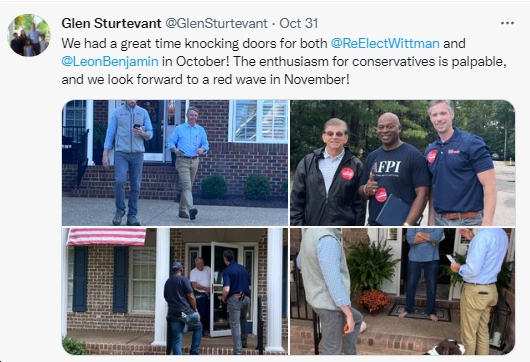 Here Sturtevant is ranting about the COVID vaccine being put on the vaccine schedule for children…as well as “vaccine passports.” 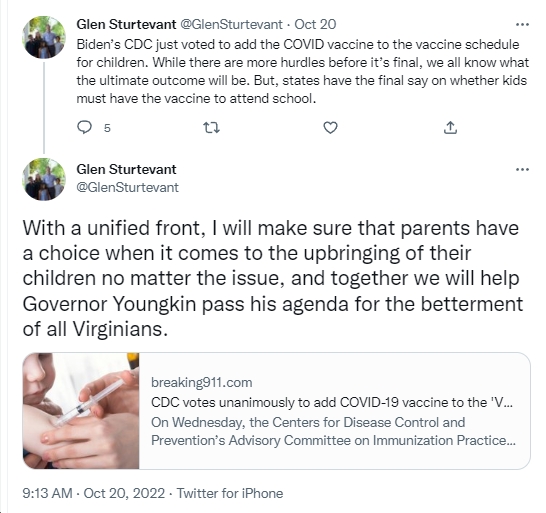 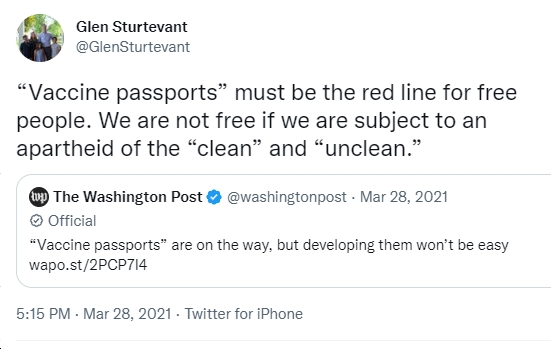 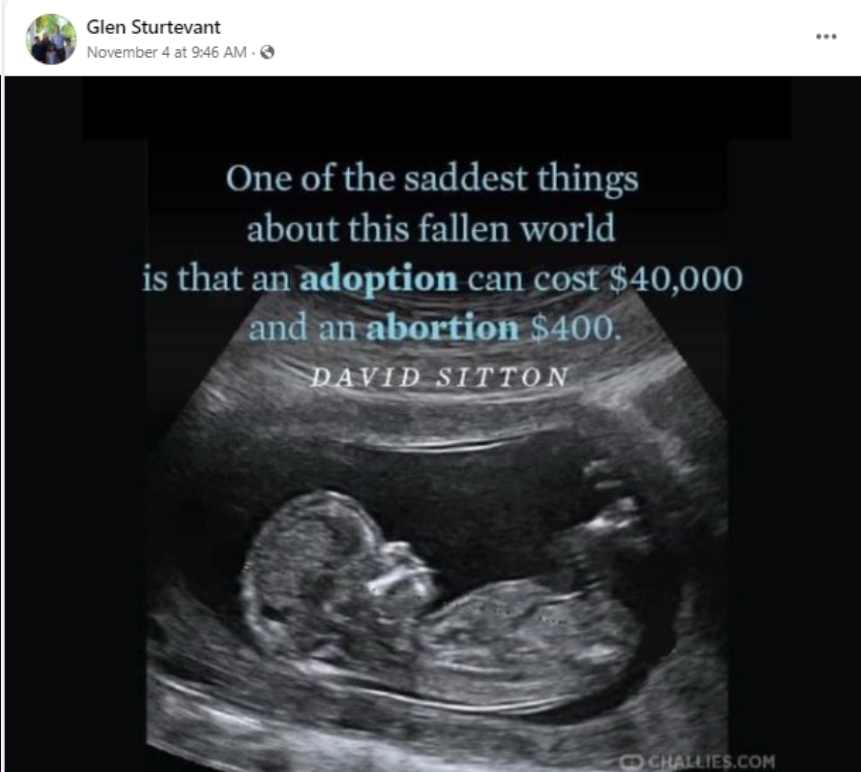 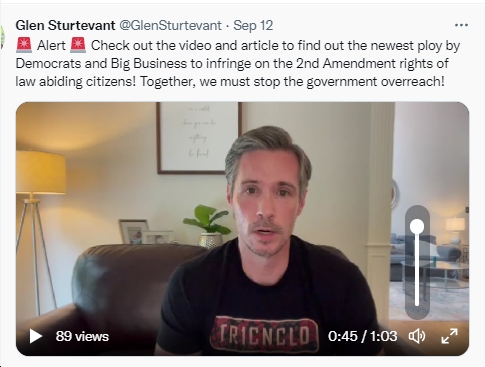 And here he is nodding towards the b.s. about “election integrity,” as well as supposed “election crimes” and “fraudulent voting”…both of which are essentially nonexistent but which tie in to Trump’s “Big Lie” about our elections supposedly not being free and fair, safe and secure. 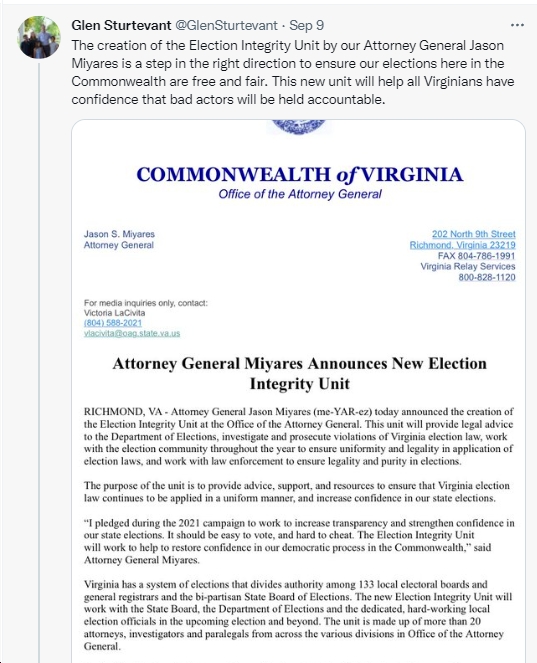 Here he is taking the side of a law enforcement officer being a member of the “Oath Keepers.” 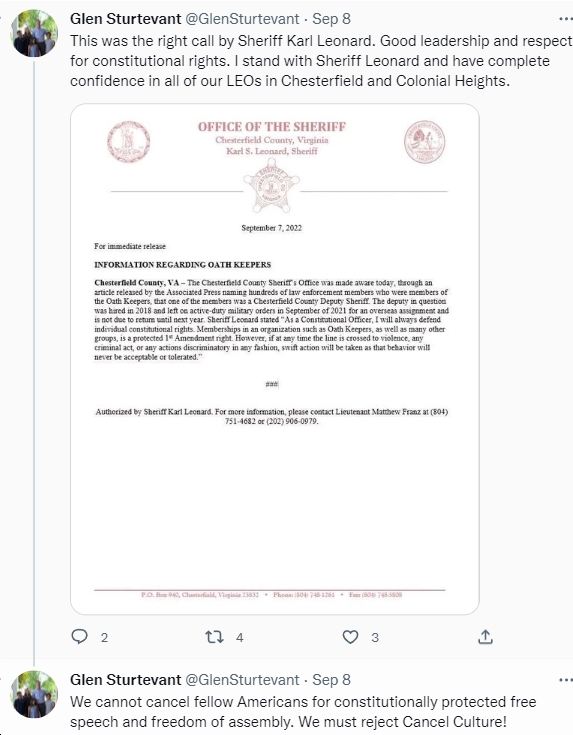 And here he is very angry that President Biden (accurately) called out Trump’s “semi-fascism,” claiming (falsely) that Biden “chose Hate in his dark, divisive speech.” 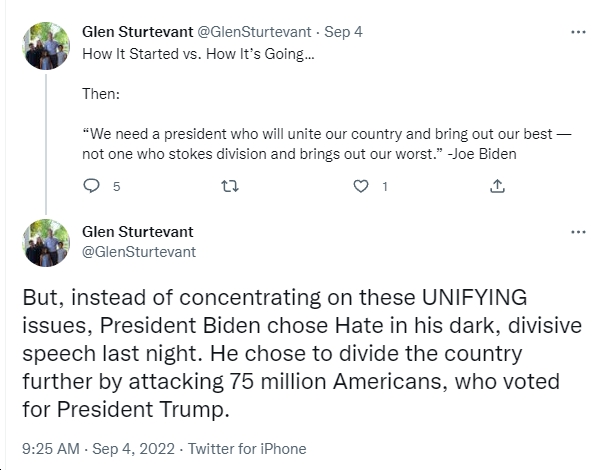