Republicans double down on giving the biggest cuts to corporations

RICHMOND, VA – Today, the House Republicans jammed through their tax bills, which benefit big corporations and the wealthy, leaving Virginia families and small businesses in the dust. House Democrats tried to get Republicans to come to the table on a plan of their own – one that would immediately give more relief to the hardworking Virginians at less cost to funding essential services.

“I always say: don’t tell me your priorities. Show me your budget and I’ll tell you your priorities,” said Democratic Leader Don Scott. “The Republican tax bill is a giveaway to corporations – which will either mean tax hikes for families or deep cuts to services. The Democratic tax bill gives cuts to families and provides immediate relief to people feeling soaring costs. That’s because Democrats prioritize families, and Republicans prioritize corporations and the wealthy.”

“Republicans need to tell Virginians what they would cut in order to pay for corporations to keep making more and more at the cost of hardworking families,” Chair Charniele Herring said. “There’s no reason CEOs should be keeping more of what they earn than everyday Virginians.”

Delegates Vivian Watts, Marcus Simon, Jeff Bourne, and Sally Hudson gave floor speeches highlighting how out of touch the Republicans’ plan really is. “We finally have funds to catch up with our schools,” Delegate Hudson said, “Kids can’t take a 50 dollar tax cut to their understaffed school and say, “Now will you teach me how to read?”

In a speech yesterday, Governor Youngkin doubled down on his corporate tax cut, maintaining that he still plans to give big businesses more tax relief than Virginia families.

THE FACTS ON THE REPUBLICAN TAX BILLS

FACT: Small Businesses Will Pay More In Taxes Than The Biggest Corporations In The State

FACT: Over Half of Individual Taxpayers Would Benefit By $50 Or Less Annually Under the Republican Plan 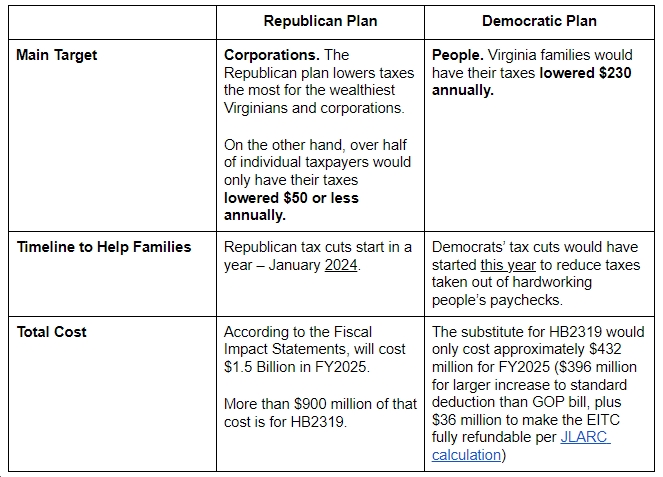