Earlier this month, the Daily Progress assessed that the University of Virginia (UVa) is “at the mercy of forces beyond its control” and that escalating costs of UVa’s financial aid program, AccessUVa, “cannot be sustained.”

Brendan Wynn, a student at the University who has been outspoken about the cuts to AccessUVa and one of the leaders of the Restore AccessUVa movement, has hit back with a letter to the editor, which was published over the weekend:

As a University of Virginia student, I respectfully disagree with the editorial assessment that UVa is “at the mercy of forces beyond its control” and that escalating costs “cannot be sustained” (“AccessUVa: Scale back to give more,” The Daily Progress, Dec. 2). Although dwindling state support has contributed to UVa’s budget crunch, this cut is ultimately a matter of priorities.

As one of the wealthiest public institutions of higher education in the nation, the university — and not its donors — has an obligation to ensure that cost, including loan burden, is not a barrier to a high-quality education for talented students.

The truth is that out of an operational budget of $1.4 billion, the $6 million cost to maintain a no-loan policy for our lowest-income students amounts to a total of .05 percent.

The damaging cut will make it harder for many low-income students and students of color to obtain a college education at a school that already struggles to increase its socioeconomic diversity and ranks at the bottom 5 percent in terms of access for low-income students.

Mr. Jefferson was ahead of his time when he designed our university to educate talented students regardless of their wealth. Grant aid to students from families in or near poverty should be a budget priority here at UVa. The question that those who have cut financial aid have repeatedly failed to answer is this: Why, if they had to cut somewhere, do they chose to cut grant aid to students from the poorest families, who do not have a safety net like other students do?

This was not a matter of financial inevitability, but a question of financial priorities. Jefferson had it right.

Although dwindling state support has contributed to UVa’s budget crunch, this cut is ultimately a matter of institutional priorities. The President of the University, Teresa Sullivan, has launched a fundraising appeal, which ultimately deflects the institution’s responsibility to promote access and affordability onto the hands of students and alumni. This effort would amount to little more than plaster over the cracks.

As part of the national Giving Tuesday movement, President Sullivan donated her recently-approved 2% salary increase to match every dollar raised for AccessUVa by the Young Alumni Council up to $10,000. While such personal commitment is a nice gesture, it falls far short from a meaningful institutional commitment. The fact remains that the University significantly scaled back its financial aid to the poorest of students, all in the name of saving $6 million – less than ½ of 1 percent – from the annual $1.4 billion budget.

Wynn’s letter is on point -- Thomas Jefferson was ahead of his time when he designed the University to educate talented students regardless of their wealth. Considering that UVa already sits in the bottom 5% of colleges nationwide in access for low-income students, grant aid for students living in or near poverty must be more of a budget priority. The question that those who have cut financial aid have repeatedly failed to answer is why, if they had to cut somewhere, they chose to cut grant aid to students from the poorest families, those who do not have a safety net in the same way other students often do.

Cross-Posted at I AM NOT A LOAN

UVa’s Vice Rector is Out of Touch With Reality: Low-Income Students Should’t be Crippled...

As many of you may know, early in August, the University of Virginia’s (UVa) Board of Visitor (BOV) – the governing board for the institution - voted to slash overall funding for AccessUVa, the school’s financial aid program, and completely eradicate the no-loan policy for low-income students in the program. Vice Rector of the Board, William Goodwin, justified the cuts by proclaiming that low income students shouldn’t get an advantage wealthier students don’t have, “they all graduate with the same degree”, as reported in this Daily Progress article.

The Vice Rector is out of touch with reality. Low-income students who make it to college have to pay, on average, ¾ of their family income for just one year at a four-year institution. That’s five times the share wealthy students have to pay! So while all students may graduate with the same degree, they don’t all graduate with the same amount of debt. According to the Doing Away with Debt report --a report by The Education Trust that offers a feasible way to provide all students with affordable college -- the lowest-income students pay an average of 72% of their family income towards annual college cost, after accounting for college grant aid. For the wealthiest students, that share is only 14%. Now UVa’s BOV voted for a decision that could make their incoming freshman class next fall take out nearly $30,000 in student loans.

University of Virginia’s Decision to Cut Funding From AccessUVa Is Unnecessary & a Slap...

Last month, the University of Virginia's Board of Visitors voted to cut funding for the college’s financial aid program known as AccessUVa. Despite the university's $5 billion endowment - which has more than doubled since 2001 - the Board of Visitors decided to cut aid for those who need it most: Students from the lowest-income families.

Having benefited from AccessUVa myself, I decided to do a little digging.

Here are the facts:

UVA is the single wealthiest public university per capita in our country. It also has one of the least economically diverse student bodies in the nation in terms of low-income student access. According to U.S. Department of Education data, we rank in the bottom five percent of colleges in terms of low-income student access, as measured by the percent of the student body receiving a Pell Grant.

Despite these facts, the University still decided to cut it’s financial aid program, forcing the poorest students to graduate with up to $28,000 in debt - if they aren’t deterred from attending in the first place. For a student from a poor family, $28,000 in additional debt is often unbearable - it could be at least ⅔ of their family’s income.

I created this graphic below to summarize this issue for students and Virginia residents. Please share this image with your friends and family on Facebook, and urge them to sign the petition I started:

The Board of Visitors is scheduled to meet next week, September 19th and 20th, and I -- along with other students from the university -- plan on being there to hand-deliver this petition and demand the Board take a re-vote on AccessUVa.

Cross-Posted at I AM NOT A LOAN.

Eugene Resnick, UVA Class of 2010: University of Virginia’s Board of Visitors Have Learned... 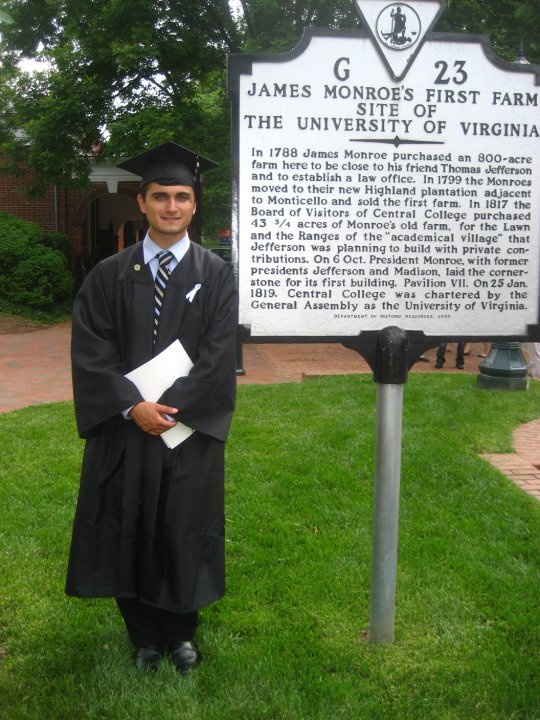 I am a 2010 graduate of the College of Arts and Sciences, and served as a College Representative on the Student Council in 2009-2010. I was an Echols Scholar and Distinguished Major having received a full 100% grant from AccessUVA. Without it, it would have been impossible to attend a university as expensive and prestigious as UVA without graduating with massive amounts of debt that would have haunted me and my family for a lifetime. I was one of the first classes of AccessUVA recipients.

It is thanks to AccessUVA grants that allowed me to pursue a UVA education, opened the door for me to study abroad in Denmark and India, intern abroad in Ireland, partake in multiple ASB trips to Ecuador and Peru, and so much more in the four years I spent in Charlottesville. It made me the person I am today and I am deeply disappointed by the Board of Governor's decision. I am shocked, and baffled to hear that the University is now going backwards when we made so much progress in the 2006-2010 period that I was there.

I thank AccessUVA and UVA in general for giving me the inspiration to pursue a Master's at one of the most prestigious universities in the world, the London School of Economics, where I completed an MSc in 2011. I currently still live in London, working in communications and public relations for corporate clients. All of this would not have been possible without AccessUVA. The Board of Visitors has clearly learned nothing and it is a shame to see what has happened to UVA since I graduated in 2010. I am deeply disappointed especially as my main motivation for donating to the University was targeted towards helping others in AccessUVa.

To show your support for students, please sign the petition telling the Board of Visitors to restore full funding for the AccessUVa program.

I am not from Virginia, but AccessUVa still matters to me

A lot of people may wonder why those of us not affiliated with the University of Virginia or a Virginia resident care about the bad decision by the University of Virginia’s Board of Visitors to cut funding to their AccessUVa program; a program that kept debt low for their students. We care because the fight for college affordability must take on any and every initiative that keeps students' debt-free.

Education iamnotaloan - August 20, 2013 0
Recently, UVA's governing board, the Board of Visitors, voted to overhaul the AccessUVa program and scale back funding for it.

For almost a decade, the University of Virginia (UVA) had been a leader in college access for low-income students with its program. This program enabled students who have the brains, but not the bucks, to attend the institution without having to rely on hefty student loans.

Students who already have trouble paying for college will now have to take out nearly $30,000 in student loans to attend UVA, saddling these students with far too much debt once they graduate.

The next Board of Visitors meeting is scheduled for September 19th, giving us little over a month to raise our voices and let UVA know that they are making a HUGE mistake by decreasing funding for this groundbreaking program.

With an endowment of over $5 billion, UVA should not be deferring thousands of bright, prospective students from attending because of student debt.

As Chelsea Pierson, a UVA graduate, stated in the comments section of the petition urging the Board of Vistors to restore funding to the program:

Had AccessUVa not provided a full grant scholarship for me, I would not have been able to attend UVa. Without it, I would not be about to embark on a journey, teaching in abroad in the UK. I would never have been able to afford an education had this program not made it possible. Please don't keep others from changing the world. This program made it possible for me. Cutting the AccessUVa program will make it IMPOSSIBLE for many.

A high-quality education does not have to mean high student debt.With our nation facing a cumulative student debt of over one trillion dollars, it's time for colleges to accept responsibility for their role in our college affordability crisis.

To help, sign the petition to tell UVA's Board of Visitors to keep UVA affordable to low-income students and restore funding to AccessUVa.

Cross-Posted at I AM NOT A LOAN and Daily Kos.