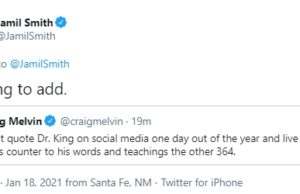 lowkell - January 18, 2021 0
The following Twitter exchange between Craig Melvin and Jamil Smith points out that it makes zero sense for people to "quote Dr. King on... 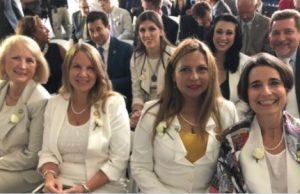 Blue Virginia - July 30, 2019 5
by Bill Rice, a student at Georgetown University Law Center, interning this summer at the Virginia Poverty Law Center "I must confess that over the...

lowkell - January 15, 2018 3
by Lowell Here are a few national and Virginia news headlines, political and otherwise, for Monday, MLK Jr. Day, January 22. Blow: Trump Is a...

What Would Martin Luther King, Jr. Do in the Face of...

5oclockshadow - March 12, 2016 2
The pathway forward against the violence and hate of the Trump campaign is impossible for either the Republican establishment or the Democratic establishment, but...

Mark Warner – I will no longer support you

It does not matter that neither of these amendments were going to pass. I rely on the words of Martin Luther King, Jr.:

There comes a time when one must take a position that is neither safe, nor politic, nor popular, but he must take it because conscience tells him it is right.

It matters not to me whether Mark Warner believes the baloney of the gun lobby or merely lacks the guts to stand up for what is right.  What is right is to stop the slaughter.

At this moment, when our politics appear so sharply polarized, and faith in our institutions so greatly diminished, we need more than ever to take heed of Dr. King's teachings...we have a duty to fight against poverty even if we are well off...

...If [Martin Luther King Jr.] were alive today, I believe he would remind us that the unemployed worker can rightly challenge the excesses of Wall Street without demonizing all who work there; that the businessman can enter tough negotiations with his company's union without vilifying the right to collectively bargain. He would want us to know we can argue fiercely about the proper size and role of government without questioning each other's love for this country - (applause) - with the knowledge that in this democracy, government is no distant object but is rather an expression of our common commitments to one another. He would call on us to assume the best in each other rather than the worst, and challenge one another in ways that ultimately heal rather than wound.

All so true, as Martin Luther King, Jr. was "an impassioned advocate of economic justice as well as social justice" (according to his son, writing in today's Washington Post), in addition to full equality for all Americans. I just wish he were alive today, as I'm confident that he'd be fighting with for progress and against reactionaries, bigots, and demagogues, as he always did in his life. Thank you, Dr. King.

Are Westboro Baptists Over the Line?

Hampton Roads personality, Mike Imprevento, takes on one aspect of free speech arising from the Westboro Baptist decision during his new radio show today on WNIS. The subject matter on his weekly motorcycle show began broadening during the Wisconsin public union spat. Now he has this new forum.

"The Westboro thing is a no brainer.  A hero comes back dead and some morons from Kansas who have no life experience at all pronounce that this person is dead because of American foreign policy and the fact that we have gays in the military? It's ridiculous." -- Mike Imprevento

This episode about crafting a local ordinance that will protect families of fallen soldiers from the harassing antics of the caustic Kansas clique is aimed squarely at the broader Hampton Roads audience. Though he points out that the Supreme Court decision begs the larger question about at what point we decide certain statements do not deserve any protection (when a reasonable person would consider that the words might insight violence), it appears he wants to focus more manageably on these specific tactics. With the eclectic WNIS audience, you never know which side a caller may take and the initial comment by a caller may not reveal the agenda for the call, making for some unexpected twists when a subject like this is broached (as you will see under the fold).

lowkell - August 29, 2010 14
Courtesy of Charles Lemos at MyDD, here are two photos of the Lincoln Memorial and Reflecting Pool area of the National Mall. The first photo is from August 28, 1963, Martin Luther King's "I have a dream" speech, attended by approximately 250,000 people.

Now, compare to August 28, 2010.  As Charles Lemos says, "In 1963, 0.0013228 percent of the US population was present to hear Dr. King's I Have a Dream speech. At Beckamania just 0.000281 percent of the US population came to hear the ramblings of a certifiable pair of morons." That would be 87,000 (overwhelmingly white) people to hear Glenn Beck, as estimated by independent/private outfit AirPhotosLive.com (the right wingnuts are throwing around "numbers" as high as 2 million, which of course is as delusional as their political philosophy). So, MLK had 3 times the people - and a much more diverse crowd, as well - attending his rally at a time when the U.S. population was just 189 million (compared to about 310 million in 2010).  Yesterday was a beautiful day, couldn't ask for better weather in Washington, DC, so that's certainly not why attendance was such a dud. Heck, the inaugural concert for Barack Obama's inauguration, held on January 18, 2009, had 400,000 attendees in the dead of winter, with temperatures in the 20s.  So, maybe yesterday's Beck/Palin attendance "fail" has more to do with the (deeply flawed) messengers and the (incoherent, angry) message they're delivering?

Here is Martin Luther King III, from an August 25 op-ed in the Washington Post:

He did, however, wholeheartedly embrace the "social gospel." His spiritual and intellectual mentors included the great theologians of the social gospel Walter Rauschenbush and Howard Thurman. He said that any religion that is not concerned about the poor and disadvantaged, "the slums that damn them, the economic conditions that strangle them and the social conditions that cripple them[,] is a spiritually moribund religion awaiting burial." In his "Dream" speech, my father paraphrased the prophet Amos, saying, "We will not be satisfied until justice rolls down like waters and righteousness like a mighty stream."

I pray that all Americans will embrace the challenge of social justice and the unifying spirit that my father shared with his compatriots. With this commitment, we can begin to find new ways to reach out to one another, to heal our divisions, and build bridges of hope and opportunity benefiting all people. In so doing, we will not merely be seeking the dream; we will at long last be living it.