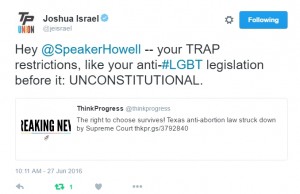 Thank You to Sen. Scott Surovell for Fighting for Consumers, Not...

lowkell - April 11, 2016 0
You might have noticed an ad currently running on this blog by the Virginia Campaign for Consumer Choice. The point of this campaign is both...

Thousands of Virginians have taken action to urge regulators to rely on evidence-based medicine, preserve access to safe and legal abortion.

Women's health advocates delivered over 17,324 petitions and comments to the Virginia Board of Health Thursday, opposing proposed regulations that could shut down women's health centers and endanger access to safe and legal abortion in the Commonwealth. Virginians from across the state have took action to express outrage over new, burdensome regulations that prioritize ideological agendas over evidence-based medicine. In July, the Board voted to amend the proposed regulations, the most repressive in the nation, to "grandfather in" existing clinics from draconian building regulations unrelated to patient safety. That amendment would allow clinics to remain open and continue to provide thousands of Virginia women life-saving cancer screenings, STD testing, family planning services, and safe, legal first trimester abortions. Attorney General Ken Cuccinelli is misrepresenting the law and misguiding the Board of Health in an attempt to bully them into shutting down clinics against their will. By threatening to refuse to "certify" the Board's authority, the Attorney General has forced the Board to reconsider legally sound and medically correct regulations in order to advance a political agenda.

"Political agendas have no place in the doctor's office or governing decisions that should rely solely on evidence-based medicine," said ProgressVA Executive Director Anna Scholl. "The Board's mission statement declares they are the 'primary advocate and representative of the citizens of the Commonwealth', not agents of politicians' political agendas. Virginians have made their voices clear: base the regulations on evidence-based medicine. We hope the Board chooses to represent the will of the public and votes to uphold the grandfather amendment."

This is what Republicans do, move us backwards to the dark ages, to back-alley abortions, coat hangers, all of that. Don't let them get away with it, and absolutely DO NOT let them take control of the State Senate this November.  If you think it's bad now...'nuff said.

After hours of emotional debate, the Virginia Board of Health overwhelmingly approved far-reaching regulations for abortion clinics Thursday that some operators say could shut down many of the state's 22 facilities.

The very specific regulations, some of the toughest in the nation, include mandates on the size of exam rooms, the width of hallways and the number of parking spaces, as well as requirements for inspections, medical procedures and record-keeping.

Also, remember who's lurking in the background of all this. As Del. Charniele Herring pointed out, this is largely the handiwork of Ayatollah Attorney General Ken Cuccinelli, whose "office advised the Virginia Board of Health members that accepting some of the most reasonable amendments to the draft regulations was beyond their authority." In 2013, Cuccinelli is another one who needs to be booted out of office, no matter what he's running for. What a nightmare and what a disgrace.

P.S. Just to reiterate the obvious: these regulations have absolutely nothing whatsoever to do with protecting women's health. Evidence for this assertion? Put it this way, have you heard of an epidemic of health-related problems at Virginia abortion clinics in recent years? No, of course not, because there hasn't been any such thing. It's all politics, combined with right-wing theocratic ideology and misogyny (e.g., control of women's bodies).

How to convert New Agers to Right Wing Lunacy

Dr. Joseph Mercola is one of the most popular New Age health gurus on the web. He is now using that popularity to push Ron Paul for president.

I tend to agree with many of Mercola's positions in favor of natural foods and avoiding chemical toxins in food and the environment.  I even agree with a few of his more controversial stances, like his criticism of the use of mercury-containing dental fillings.  (Does it really make sense to put a known, potent toxin in your mouth, for permanent use?)

Unfortunately, he too frequently dips into the crazy end of the pool, for example in jumping on the twisted bandwagon claiming that HIV does not cause AIDS.  He is also a relentless marketer of sometimes questionable products.  That has gotten him in trouble more than once with the FDA, which issued warnings to him in 2005, 2006 and 2011 for making exaggerated claims about his products, e.g., that one will "help to virtually eliminate your risk of developing cancer in the future."

These experiences with the FDA in turn seem to have fueled a certain paranoia and distrust of government, and hence perhaps Mercola's embrace of Ron Paul's vision of our Federal government and most of its programs being gutted.

Virginia is for Lovers, Not Radioactive Tailings

Virginia, the site of many great historical battles, is in the opening stages of another -- this time, not over independence, or slavery, or freedom from discrimination, but freedom from radioactivity,and all the horrors that go with it.

A Canadian company is trying to overturn a 30-year-old ban on uranium mining in the state of Virginia, despite the fact that pretty much all commercial uranium mining in the US to date has been done in arid, lightly populated Western states.  Mining uranium in Virginia would make us the guinea pigs in an experiment to see what happens when you unearth millions of pounds of radioactive material, and dispose of the resulting waste, in a wet climate, surrounded by waterways and densely populated areas.

In the West and elsewhere in the world where uranium has been mined, according to the Virginia Conservation Network, problems have included "contamination of ground and surface water; millions of tons of radioactive mining waste; and increased birth defeats, leukemia, and childhood cancer for the surrounding public."  In order to prevent such curses from being visited on Virginia, a new broad-based coalition has come together called Keep the Ban.

Professor Richard Bonnie of U.Va. Law presented the results of a study of mental health care at Virginia's colleges and universities last week-and testified to the Behavioral Health Subcommittee of the General Assembly's Joint Commission on Health Care regarding the results.

Here are some of the results:

I would imagine that this is due in large part to funding issues. The Fairfax County Times wrote this month:

"Five consecutive years of state funding reductions have made Virginia's public universities and colleges less affordable and accessible to students, according to a report released by the State Council for Higher Education for Virginia."

I understand the constraints facing the General Assembly when trying to balance a budget, but it doesn't seem like we should be sacrificing providing a low cost public education to Virginia students-particularly when Virginia's colleges and universities are some of the best in the nation. Extending that, I REALLY don't think that we should have this much of a discrepancy compared to private institutions when it comes to mental services, and I'm quite frankly surprised that the state has gotten away with it after several prominent instances of mental health issues not seeing proper care in Virginia schools over the past few years (the most obvious being the Virginia Tech shooting, but I can think of many others).