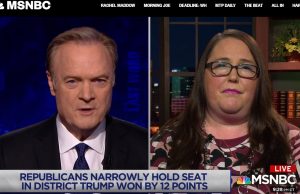 Video: CNU Prof. Rachel Bitecofer Nails It on Why Dems Could...

lowkell - September 13, 2019 3
Great explanation last night on MSNBC by CNU Professor Rachel Bitecofer as to why Democrats could have won, but instead narrowly lost, the special...

Andy Schmookler - May 22, 2018 2
"The Constitutional Crisis is Here" reads the title of the recent column by Eugene Robinson in the Washington Post. Robinson's piece concerns President Trump's "demand" that...

Two-Fer: Spreading the Gangrene to Pence and Ryan, and Supporting Lawrence...

Andy Schmookler - May 21, 2017 8
Never Forget: It's Bigger than Trump Although the Trump problem is urgent, Trump is also a symptom of a much deeper problem that permeates today's...

Hearing “the rumble of the country?”

“Palin and Tea Party Are A Joke:” Says A Founder

A former CEO and now a financial blogger, Karl Denninger, who is credited with helping to found the Tea Party movement, just sent a letter to the Tea Party denouncing it, and outting it as little more than a tool of the very corporate financial industry it originally was founded to attack. Denninger wrote:

"Tea Party my ass. This was nothing other than the Republican Party stealing the anger of a population that was fed up with the Republican Party's own theft of their tax money at gunpoint to bail out the robbers of Wall Street and fraudulently redirecting it back toward electing the very people who stole all the ****ing money!"

Denninger, along with fellow bloggers at Market Ticker Graham Makohoniuk and Stephanie Jasky, promoted the idea in January 2009 of protesting the $800 billion stimulus and the $700 billion bailout by  mailing a tea bag to Congress. Denninger also suggested holding a "tea party" protest at President Obama's inauguration.

This was the actual launch of the Tea Party. Today, Denninger says bitterly he ought to sue for defamation anyone using "Tea Party" because the movement has been highjacked, its purpose so deformed it is now "a joke."

His letter to the Tea Party is quoted extensively here