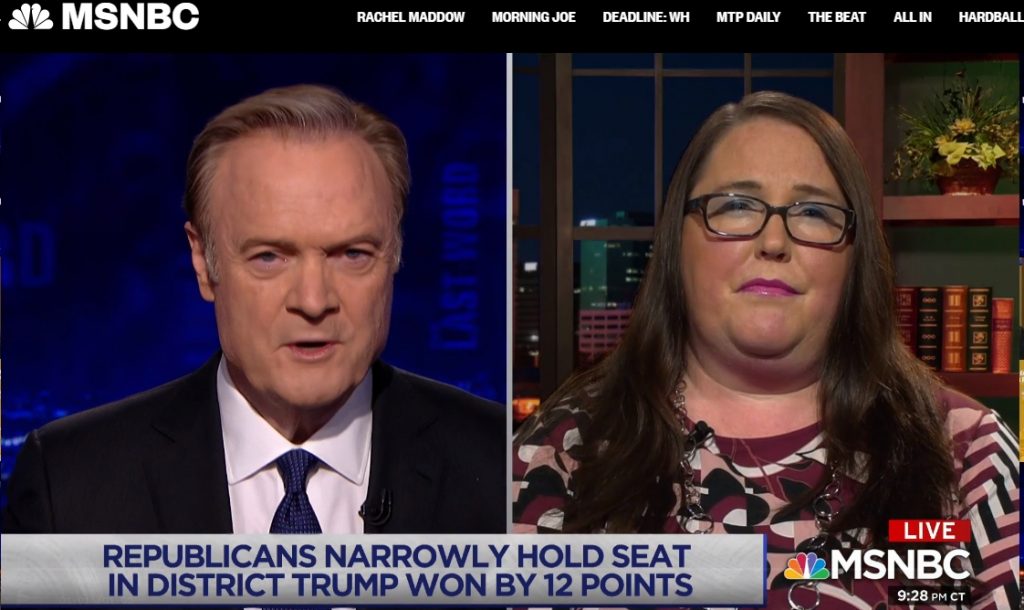 Great explanation last night on MSNBC by CNU Professor Rachel Bitecofer as to why Democrats could have won, but instead narrowly lost, the special election in NC09 on Tuesday. I’d argue that Bitecofer’s analysis has a *great* deal of relevance to the Virginia 2019 legislative campaigns currently going on, which is why I’m posting what Bitecofer had to say.  Here’s a transcript, bolding by me for emphasis:

So here in Virginia, I’ve been arguing for a looong time that Democratic messaging needs to tie the 2019 General Assembly elections as closely as possible to the intense anti-Trump energy among the Democratic base. What we saw in 2017 here in Virginia, of course, was a huge “Blue Wave,” in large part because Democratic voters and activists were fired up in “resistance” to the Trump disaster. Then in 2018, we saw big Democratic pickups in the U.S. House of Representatives, including three districts (VA02, VA07, VA10) right here in Virginia, yet again motivated heavily by anti-Trump anger and outrage.

Now, you might argue that those elections were statewide and federal, and that the current legislative and local races aren’t really amenable to “nationalizing” because voters don’t really see legislative and local offices in those terms. My argument, as I wrote back in late August, is that huge Democratic wins here in Virginia on November 5, in addition to Trump’s ugly head exploding, the narrative coming out of that would be highly positive for Democrats and very negative – possibly even demoralizing – for Republicans. That’s in addition to the fact that state legislatures are important in and of themselves, both in terms of passing important legislation, and also in terms of Congressional district lines (which, of course, can impact who controls the U.S. House), voting rights (which can very much impact national elections), etc.

So what I’d like to see between now and November 5 is simple: 1) a heavy emphasis in Democratic messaging on the issues people care about, of course, but also on how we need to push back against Trump and how these elections are a way to do that; 2) as many of the 2020 Democratic presidential candidates as possible coming in to Virginia to campaign for Democratic candidates, up and down the ballot; 3) if at all possible, appearance by Democratic stars like Barack Obama, Michelle Obama and Stacey Abrams. Again, note that in the NC special election earlier this week, Trump’s election-eve rally was not countered by a Democratic rally with a Democratic star like Barack Obama. Why not? Got me, but it seems like a huge mistake to me. And to CNU Professor Rachel Bitecofer as well, it would appear.

Former VA Speaker @EFillerCorn, who helped lead passage of a number of gun safety laws, calls on LG Sears to "turn the plane around and cancel your Texas NRA fundraiser"; calls on Gov. Youngkin to "stop these rollbacks for the remainder of your term" https://bluevirginia.us/2022/05/after-mass-shooting-in-elementary-school-leaving-19-children-dead-lt-gov-sears-will-be-keynote-speaker-at-nra-event-in-texas-this-weekend#comment-5867810021

.@djrothkopf: “The reason that Republicans were willing to storm the Capitol to overturn a fair election…is because they fear the majority” (What Rs fear is that, "on issue after issue, what's best for the country is what most people want.") https://bluevirginia.us/2022/05/david-rothkopf-the-reason-that-republicans-were-willing-to-storm-the-capitol-to-overturn-a-fair-election-is-because-they-fear-the-majority