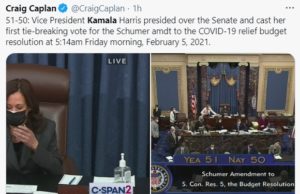 lowkell - February 5, 2021 0
by Lowell Here are a few national and Virginia news headlines, political and otherwise, for Friday, February 5. Power, Patriotism and 1.4 Billion People: How...

An American In Yemen

A decade ago I came to know a Yemeni American in Aden. Her father was a Chinese sailor who jumped ship in the Bab el Mandeb and patriated. Raised in the southern province, she married an American Marine and immigrated to the United States. She'd returned when he fell ill.

This was a proud American. She boldly wore clothing displaying the stars and stripes while tending her father's business. At times like these, I wonder how she is; if she is still there and if, like many other Americans who find themselves overseas in the midst of turmoil through personal circumstance, she will be safe.

Yemen looks to be another case where no one paid enough attention until it was too late. Most Americans don't have a context beyond a vague regional orientation; just another homogenous nation of Arab Muslims with a quasi-legitimate leader gone corrupt or a dictator who is responsible for all that ails. They have small inkling of the complex relationships and internal tribal contests or that Gamal Abdel Nasser (Hussein) sent Egyptian forces to shore up a military rebellion inspired by his Pan-Arab intrigue 50 years ago; that Yemen remained divided North and South for years and that animosity and mistrust persists. South Yemen experimented with communism, but did not inhale very deeply. The Saudis have no interest in a strong partner on their border (especially one that is Shia led) and lay claim to some if not all of the territory; otherwise uninterested in the nation's welfare. The national identity remains confused to this day. And we Americans have a role.