McCain Funeral Makes It Clear: Patriotism Is About Honoring the Things...

Edwin Santana - September 1, 2018
2
by Edwin Santana I’m Edwin Santana. I was an officer in the U.S. Marine Corps and ran for Congress earlier this year because I hated...

lowkell - July 1, 2017
0
As Del. Alfonso Lopez puts it: "This is amazing. Everyone in this video is a direct descendant of a Signer of the Declaration of...

“We don’t need to make America great again. We need to...

Whatever infantile world some so-called libertarians are living in, it's clearly not the world that the rest of us are breathing in. According to one author, the furloughing of 800,000 federal government employees hasn't caused a tangible disruption within our society. Another chestnut is the old Tea Party fallback quote, "Obama's...just pure distilled Marxism." Not only can a man not be a system of thought, President Obama's policies have come nowhere near socialism, let alone Marxism.

These common beliefs among the Tea Party base (i.e., government employees, on the whole, serve no critical function in our society and President Obama is a shady Marxist/socialist/communist (?)) have continued to be a distorted but nonetheless real set of beliefs that only increases in severity with each political move that President Obama makes. That is, President Obama can do no right in the eyes of some within the Tea Party movement.

Perhaps a big reason why we are even in an unnecessary situation of government shutting down is President Obama has handed this tiny group victories in the past, emboldening them to take ever more drastic steps. We'll never know if this situation would have played out differently had President Obama held firm in the past.

The point is not to place blame at President Obama's doorstep, however. It is to argue that the Democratic Party's bending position to the crazies of America has left the door open for the kinds of drastic political moves that the Republican Party in the House is taking. If the Tea Party wants their voice to be heard, they better mediate through the saner elements in their party and let them filter what is and isn't appropriate.

Bombarding Reason, the Conservative Strategy for Winning the War of Ideas

When I take a step back, give myself a chance to breathe, and take a deep look at our current political environment, the contours of certain political groups become even more ghastly in their utter disregard for compassion, understanding, respect, and the like. Many of these groups, or at least the individuals who comprise these groups, assembled at what has been crowned "CPAC," otherwise known as "Careless People Attacking Coloreds." Okay, you got me, that's not really what CPAC stands for. CPAC stands for "Conservative Political Action Conference" (no, I won't hyperlink to their website!).

But in a sense, that is really what CPAC stands for, attacking people of color, attacking established science, attacking society's disadvantaged. America has seen this before, though. America has always had political groups and individuals who just can't get enough of 'the way things were', of an imaginary and ideal past that America has unmoored itself from.

What's so disturbing about CPAC and its faithful adherers in our own time is the sheer toxicity and hatred that is infused in so many of the speeches, statements, comments, and one-liners AND the amount of mainstream support that is either passively or actively given by Americans.
Former Attorney General for George Bush, Michael Mukasey, had the following to say while seated at a CPAC panel: If "today's young" are indeed more optimistic about the future of the U.S. relative to older generations of Americans, how can we explain this sentiment in the midst of one of America's harshest economic periods?

The answer may just be in technology and the control that so many among todays young feel they can exert over their own lives and even the lives of others, even those in different countries.

Take smart phones as an example. Most smart phones come with customizable software that allow each user to include what is most important to them like celebrity news, political updates, movie reviews, and much else.

Each smart phone also comes with social media "apps" that connect each smart phone to a large world of ever increasing social media networks. If there is an important vote coming up on, say an environmental regulation, I can send an instant message to hundreds of my friends, asking them to contact their legislators in support of such and such an environmental regulation. As a result, the pressure exerted by this one message (that can mushroom into thousands, if not millions, of additional messages) could mean the difference between its passage or its failure. Imagine the sense of power felt by some of these folks when their issue wins!

Tentative Assessment on the Perversion of Truth & its Consequences

The Republican Party, the party of incessant paranoia about big government threats to individual liberty, has by its incessant perversion of the truth turned the political and the private spheres of America into a plotline out of George Orwell's novel 1984. Doublespeak and factual re-representation has become as common to Republican Party members as their compulsions to save America from the tremendous threat of clean energy. Ironically, then, the very party that dreads the day that individual liberty will be crushed by a leviathian-like government has in its own way turned the freedom of individuals on its head by bringing "truth" into a space of never-ending flux.

Without a stable form of "truth" through which each of us can communicate ideas in the public or private spheres of our lives, a space opens for powerful elites in our society like the Koch brothers and their political puppets to fill this void with whatever rubbish they choose to dispel. Take anthropogenic climate change as one of the most striking examples. The evidence is clear that regional climate change is taking place, a change at least accelerated by the activities of human kind. However, given the weakness of "truth" in our society at present, even the consensus of the overwhelming majority of climate scientists isn't enough to dispel the nagging sense among those on the right that it's all some hoax, conspiracy, or coincidence.

Following the Golden Rule under Capitalism 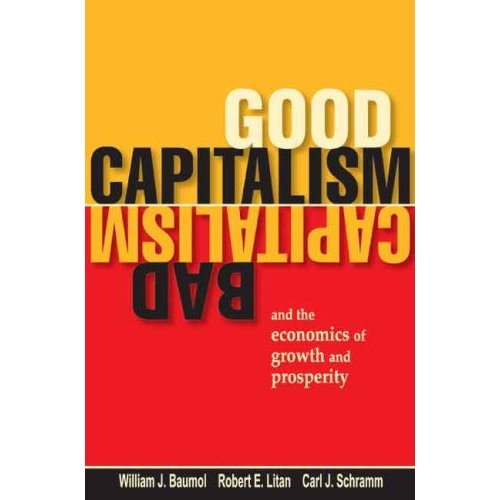 The darkest gray of extreme free market capitalism in the U.S. is the idea that subsists under this economic system that the profit-motive is the overriding consideration in human affairs, trumping all other social concerns. Under such a system of economic beliefs, one who takes this or that action is only condemned if the "return" has not been maximized relative to all other possibilities that the individual has to choose from. Yes, extreme free market capitalism discourages discrimination on all grounds except from that which no profit can be made. But extreme free market capitalism also dissuades individuals from taking objects that have not traditionally been subjected to the economic gaze (e.g. wetlands, endangered species, human well-being, etc) and placing these objects at the top of their economic calculations, if they are placed at all. An inevitable consequence of this line of economic thinking is preventable oil spills, non-fuel efficient cars, a continued reliance on fossil fuels, and so on.

I use the term "extreme" because the form of active-state capitalism that has developed in the U.S. through trial and error is not, of course, free market capitalism at its most radical. Through trial and error, our country has democratically concluded that free markets, left to their own, will reap irreparable and/or catastrophic economic and social turmoil. Adam Smith, the father of modern capitalism, understood that left to its own, wealth and power would accumulate among a minority in the marketplace and individual freedom would find itself in a strait-jacket of tyranny. Hence the rise of Marxism as the consequence of "unfettered" capitalism led directly to the toiling masses of Europe's major cities (as well as its rise in academia following the global financial crisis beginning in late 2008).