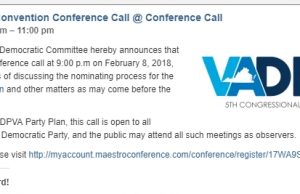 Should the 5th CD Democratic Committee Change from a Convention to...

lowkell - February 7, 2018 3
Tomorrow night at 9 pm, the 5th CD Democratic Committee is going to be holding a conference call to determine whether or not it...

Make America Safe Again? How About Help America Not Be...

Who Should Dems Want to Run Against, Now That It Clearly... 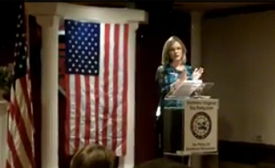 An Ant’s Grassroots View of the DPVA Convention in Fairfax Being a lowly worker ant, crawling around the roots and looking up long (often untrimmed) blades of grass while struggling through the weeds, I hereby offer my observations and parse out a lesson or two of the 2012 DPVA Convention. Keep in mind, please, I was not privy to the thoughts or intentions of the leadership or any candidate, nor did I personally see everything that happened, only overt actions and results, which I used to produce the following political analysis. Before you crucify me, read the whole thing, eh?

VENUE, ADMINISTRATION, CONDUCT OF MEETING:  I've been told the convention was held in Northern Virginia at the urging of at least one prominent Congressional staff person with extensive roots in NoVa, and was originally planned for the Patriot Center at George Mason University. When it became evident that DPVA could not fill the Center, the event was moved to the University's Center for the Arts, because no one wanted DPVA's convention to look like the Romney rally in an empty stadium. This cost the DPVA a massive cancellation fee, which still resides in the hands of GMU and can supposedly be used as a "credit" by DPVA for some future event; rather than, say, cash on hand for candidate recruitment and campaigns.

The Center for the Arts was about the right size, and has good sound, but suffers from not having a center aisle for ease of getting to one's seat, distributing such things as ballots, or even evacuating at intermissions or during emergencies. The Center was made available to the DPVA only until 2 PM, which meant that the Convention had to marshal and conduct its business in 5 hours, 9 AM to 2 PM. This included organizing itself from scratch and voting - not only on resolutions but also on presidential electors and delegates to the national convention. In addition, those 5 hours included eating lunch and listening to speeches by a long list of prominent officials and other persons of repute, not to mention necessary repeated roll calls and personal potty breaks.  Obviously, the Chair of the meeting, who is the Chair of DPVA, had to run a taut ship and everything had to go expeditiously for this to work. Unfortunately, the Chair called us to order 15 minutes late, so we were behind the power curve from minute one.

Progress Among Democrats in Virginia

The Move To Amend constituency in NOVA played a key role advocating resolutions protesting the Citizens United ruling at the recent 8th and 11th District Democratic conventions. Now we wait for the state convention this Saturday to determine if the grassroots has gained a toehold in the DPVA.

It would be only a toehold because any resolution presented at the convention will fall short of calling for the constitutional amendment the nonpartisan Move To Amend (MTA) advocates but which members of the State Central Committee and others fear as too radical an objective. There are distinguished opponents of the MTA outside the Party who are aligned with the position of officials like Frank Leone who oppose a constitutional amendment and believe that this injustice can be ameliorated with less extreme measures. It is that kind of entrenched opposition within the DPVA which makes the weaker resolution the only option that could see the light of day this Saturday.

A resolution protesting the ruling is weak medicine compared to full out support for a constitutional guarantee against corporate abuse of free speech, but it is a step in the right direction for gaining momentum in Virginia. The Virginia MTA supporters are currently courting elected officials in local NOVA jurisdictions with the goal of passing resolutions at the city/county level.

Mr. Leone, who is not alone objecting to a constitutional amendment, has reportedly stated that, as an attorney, he cannot possibly espouse an opinion that "would mess with" the rights granted by the First Amendment to the Constitution. While this is not a completely unreasonable objection, it does harken back to past efforts to water down or stonewall any initiative within the DPVA which might end up as a resolution passed at a state convention. This is the kind of conflict between what might be personal agenda and the will of the grassroots that has been the bane of Democratic activism.

The DPVA is historically reticent about advocating anything that might look like a plank much less a platform. There are office holders and legislative assistants (who make a living on incumbency) who prefer the candidates be allowed the freedom to wander off the Democratic ranch in order to preserve their seats. That kind of rudderless and unanchored raft did much to influence the rapidly declining prospects in 2009 and 2011. The opportunity for this resolution to be acted upon at the convention Saturday is a step, albeit small, in the right direction.