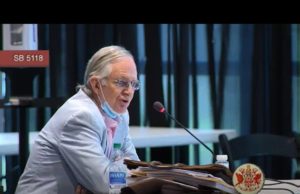 lowkell - August 29, 2020 0
As you might recall, Virginia Senate GOP leader Tommy Norment has a long history of being slimy, nasty and racist. For instance, see: BREAKING:...

Video: 57 Seconds in Which Opposition to the Dominion Bill Crumbled

lowkell - February 20, 2018 6
This afternoon, the Virginia House Commerce and Labor Committee held a public hearing on SB966, aka the "Dominion Bill." I watched parts of it,...

McDonnell Does It Again – Shuns Our Own Money

The Affordable Care Act raises the national income eligibility level for Medicaid to 138 percent of the federal poverty line. Many of the people covered under the expansion are working poor, with annual incomes of about $15,000 for a single person and $32,000 for a family of four. In June, the Supreme Court decided states could not be forced to expand Medicaid, making the increase in eligibility a state option. Hanken said most states will probably expand their programs, because the ACA calls for the federal government to fund 100 percent of the cost for the first three years and then phase down to no less than 90 percent of the cost in 2020.

But McDonnell's rejection of a program that would infuse $6 billion into the economy through 2017 means Virginians' federal tax dollars will not return to the commonwealth. "Virginia's Medicaid eligibility levels for adults are nearly the worst in the country," Hanken said.  "Why should our federal tax dollars go to other states when there is so much need here?"

Hanken believes the General Assembly will recognize that the Governor's rejection of billions of dollars for Virginia's citizens and the health care industry is unwise and shortsighted.