This afternoon, the Virginia House Commerce and Labor Committee held a public hearing on SB966, aka the “Dominion Bill.” I watched parts of it, and also checked out the live tweeting of VAPLAN2018, enough to get the gist: that this bill was going to pass easily and overwhelmingly, which in the end it did (19-3, with only Delegates Mark Keam, Lee Ware and Ben Cline opposed). To me, the key moments in which opposition to the bill crumbled were in the following 57 seconds of video, as three groups I respect a lot — Virginia Sierra Club, the Chesapeake Climate Action Network (CCAN) and the Virginia Poverty Law Center — all moved from opposition to “neutral” status, as long as the “double dipping” feature of the bill is eliminated. At this point, that leaves almost no significant force opposed to the bill, with two notable ones being the AG’s office (mostly on SCC authority/discretion, although even the AG’s office said that their “double dipping” concerns have been addressed) and Appalachian Voices (at least until full SCC authority is restored).

And with that, this bill appears to be a done deal. To my way of thinking, we still have a looong way to go in this state when it comes to promotion of clean energy, greenhouse gas reductions and energy efficiency, and I’m highly skeptical that this legislation will help much in those regards. I hope to be proven wrong on that. Even better, how about we take back control of the General Assembly in 2019 and then pass a strong, mandatory Renewable Portfolio Standard, among other measures? 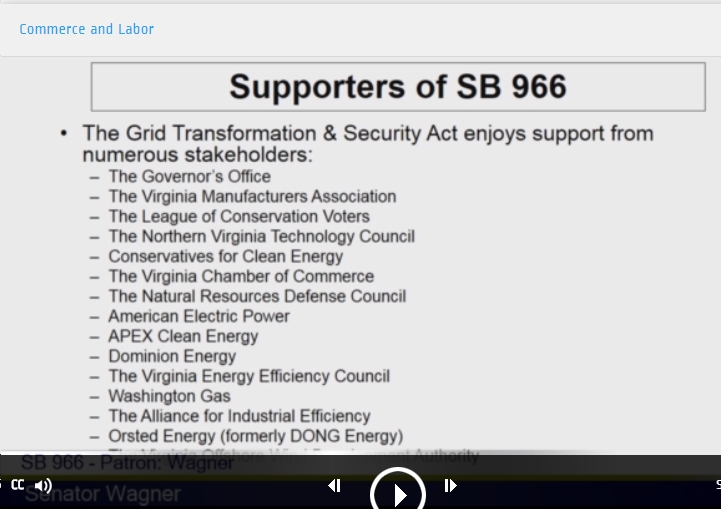 New VCU Poll Has McAuliffe, Ayala, Herring Ahead, But Take This One With a HUGE Grain/Pillar of Salt (There are a lot of very, very odd things about this poll...) https://bluevirginia.us/2021/09/new-vcu-poll-has-mcauliffe-ayala-herring-ahead-but-take-this-one-with-a-huge-grain-pillar-of-salt