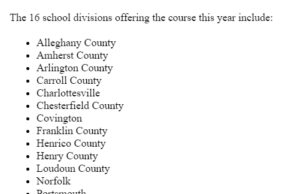 “Plans To Prosper You”: AU Museum a Template for Virginia Universities...

A Siegel - June 21, 2019 0
by Adam Siegel Part of the challenge of fostering better paths forward, across myriad issues but certainly in terms of improved race relations, is open...

lowkell - August 24, 2017 1
Native Minnesotan Corey Stewart, who grew up about as far from the Confederacy as possible while still remaining in the United States, has been...

Thomas Jefferson Changes Us From “Subjects” to “Citizens”

The Library of Congress explains:

Recent hyperspectral imaging of Thomas Jefferson's rough draft of the Declaration of Independence has clearly confirmed past speculation that Jefferson made an interesting word correction during his writing of the document, according to scientists in the Library of Congress' Preservation Research and Testing Division (PRTD).

Jefferson originally had written the phrase "our fellow subjects." But he apparently changed his mind. Heavily scrawled over the word "subjects" was an alternative, the word "citizens."

The correction seems to illuminate an important moment for Jefferson and for a nation on the eve of breaking from monarchical rule: a moment when he reconsidered his choice of words and articulated the recognition that the people of the fledgling United States of America were no longer subjects of any nation, but citizens of an emerging democracy.

Very cool, I wonder what "hyperspectral imaging" analysis would find if applied to other great documents from our history.

Republicans are betting heavily this election year on candidates from the business world - e.g., for Senate, Carly Fiorina in CA, Linda McMahon in CT, and Bill Binnie in NH; for governor, Meg Whitman in CA, Rick Snyder in MI, and Charlie Baker in MA; and this Tuesday, Tim Burns for John Murtha's House seat in PA.

Putting aside whether the recent shenanigans of corporations from Goldman Sachs to BP may tarnish this strategy, I'd like to ask an even more important question: what is the track record of businessmen who become political leaders?  Certainly there are businessmen who make admirable contributions to government, like Virginia's own Mark Warner.

But there's a very important lesson of history that most people don't know - namely, that SOME OF THE MOST DISASTROUS LEADERS OF THIS CENTURY HAVE BEEN FORMER BUSINESSMEN.  I'm not even going to get into our first MBA president, George W. Bush, both because his Reign of Error is so fresh in our minds and because, frankly, he was a lousy businessman too.  No, in this diary I'm going to focus on three successful businessmen-turned-leaders who left incredible trails of destruction behind them - Herbert Hoover, Neville Chamberlain and Robert McNamara.  And there is critical evidence that their business experience was a major contributing factor in their spectacular failures.