Wondering why Youngkin’s draft history education standards are so abysmally bad, embarrassing, etc? Check out some of the right wingnuts who contributed to them, including President Reagan’s Secretary of Education, William Bennett, who once mused, “If you wanted to reduce crime, you could, if that were your sole purpose; you could abort every black baby in this country, and your crime rate would go down,” before adding that this would be “an impossible, ridiculous and morally reprehensible thing to do, but your crime rate would go down.” Bennett also said recently – and laughably! – that Trump has “got a great legacy.” WTF? Oh, and how about the fact that:

When he became Secretary of Education in 1985, Bennett stoked controversy by speaking out against federal student-aid programs and bilingual education. Bennett also ruffled feathers by expounding on areas outside of education, supporting a highly controversial proposal to require HIV testing for gay men and vigorously defending Reagan aides implicated in the Iran-Contra Affair.

Great, huh? And then there’s the “Civics Alliance,” which rants that “American students are being subjected to a relentless form of anti-American propaganda teaching that the United States is a uniquely evil and racist country, by means of deceptively named theories and pedagogies such as Action Civics, Anti-Racism, Critical Race Theory, Globalist Civics, and Neo-Marxist forms of ‘Social Justice’ Activism,” and which believes that “Civics legislation should aim to remove all education bottlenecks where radicals can force New Civics on students, such as curriculum standards, general education requirements, and teacher licensure requirements” and “Civics legislation should seek to use special commissions to create and enforce proper civics standards, so as to bypass predictable sabotage from radical activists within education department bureaucracies.” Alrighty.

Then there’s the “National Association of Scholars,” a “conservative advocacy organization” which “opposes a perceived political correctness on college campuses and supports a return to mid-20th-century curricular and scholarship norms, and an increase in conservative representation in faculty.”

And let’s not forget good old Hillsdale College, which you can read more about in these articles: How this tiny Christian college is driving the right’s nationwide war against public schools (“In the full-scale conservative assault on public education, Hillsdale College is leading the charge”); Conservative group pushes to shift public schools to Christian nationalist principles (“Katherine Joyce, investigative reporter at Salon, talks with Alex Wagner about the role of Hillsdale College at the center of the conservative effort to make education a political battlefield with initiatives like the ‘Stop Woke Act’ in Florida to align civic and history curricula with right-wing Christian perspectives.”); and How Hillsdale College-affiliated charter schools spread (“Hillsdale President Larry Arnn headed former president Trump’s 1776 Commission, and last year Hillsdale College released a “1776 Curriculum” as a counter to the New York Times’ 1619 Project and its corresponding K-12 curriculum…Hillsdale spreads the gospel of the right-wing through their K-12 curriculum and the Barney Charter School Initiative, which currently claims member schools in nine states across the country and ‘curriculum schools’ in 19 states. The college’s mission to maintain ‘by precept and example the immemorial teachings and practices of the Christian faith’ morphs into a call for “moral virtue” in their K-12 charter schools. Trump’s ‘patriotic education’ report excuses Founding Fathers for owning slaves and likens progressives to Mussolini The school’s expanding K-12 footprint aligns with former Education Secretary Betsy DeVos’s admission that ‘greater Kingdom gain’ is the ultimate outcome of the religious right’s school choice agenda. Hillsdale has made gains in this aim via charter schools, which are publicly funded but operated by entities outside traditional school districts.”). 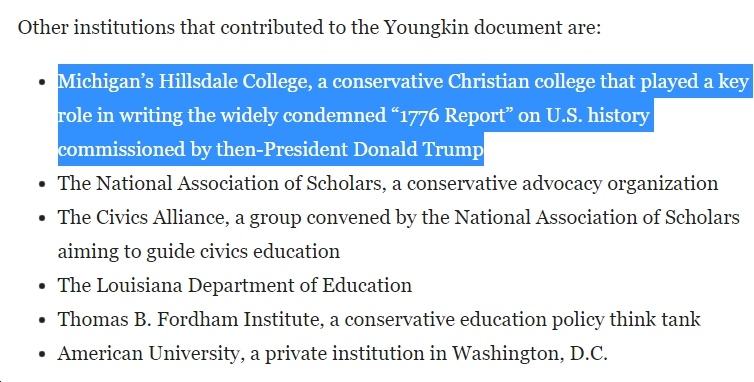 Any further questions as to why these draft standards are so awful? 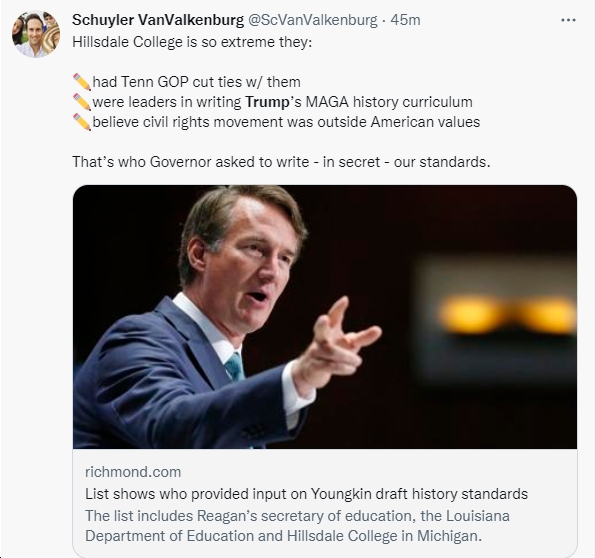