CNU Professor Rachel Bitecofer, now at the Niskanen Center, is out with her “Post-Democratic Primary Update” – “with a Biden nomination a delegate-math inevitability even if contests remain on the calendar” – which shows the Democratic nominee with 289 electoral votes (EVs) and Trump with 181 EVs. Also of note, Bitecofer moves Virginia from “Likely D” to “Safe D.” With regard to Virginia, Bitecofer adds:

“Virginia’s days as a ‘purple’ state are behind her due to the state’s atypically high rates of college education (a trait she shares with her fellow former swing state, Colorado). I’m not sure we’ll be seeing Virginia return to two-party competition in statewide contests unless college-educated voters end their long-term realignment to the Democratic Party.”

With that, here’s her updated map, with a few highlights below… 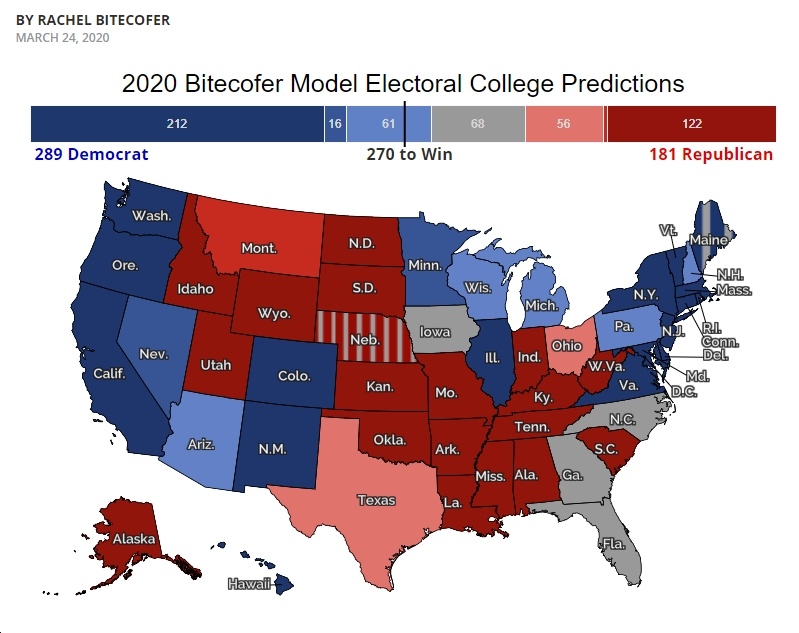 P.S. For my thoughts on Bitecofer and her analytical approach, see CNU Professor Rachel Bitecofer Is Really Having a Moment. And That’s a Very Good Thing.