For all the talk of major Republican gains coming this November, you’d think that they might already be printing up the letterhead for Speaker Boehner and Majority Leader McConnell. But not so fast, at least according to two new polls this morning.

First, here are some findings from the new, Washington Post-ABC News poll out this morning. First, note that, among both registered and “all voters,” Democrats maintain a 4-point “generic” lead over Republicans for the U.S. House of Representatives elections next November. Not great, but not horrible either.

Second, check out these numbers on enthusiasm – or lack thereof – for switching control of Congress from Democrats to Republicans this November.  Right now, among registered voters, it’s about an even split (2-point edge for “good thing”) between those wanting control of Congress to switch parties and those wanting to keep it in Democratic hands. These numbers contrast sharply with the overwhelming desires for change in 1994 and 2006, when we saw shifts in control (Republican takeover of the House in 1994; Democratic takeover of the House and Senate in 2006). 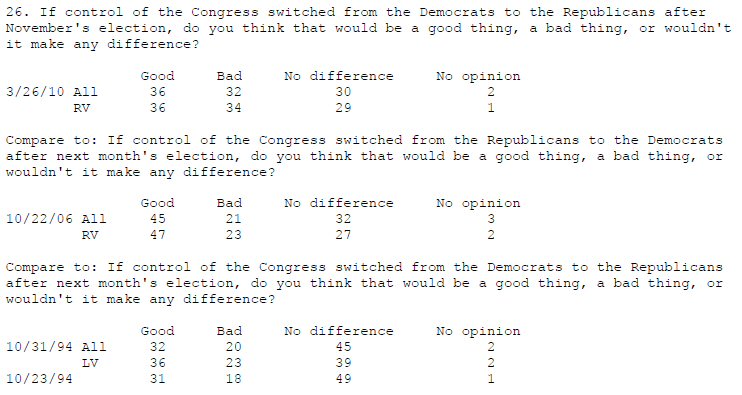 Finally, let’s look at the new numbers from Research 2000.  The first important finding is that the so-called “enthusiasm gap” has narrowed somewhat since health care reform legislation was passed.  Yes, Republicans still have the edge in who’s more likely to vote this November, but there’s been a big increase in Democrats who are “likely or definitely going to vote”, from 40% on 3/8-10 to 55% on 3/22-3/25.  Republican enthusiasm also went up, from 51% to 62%, but not quite as much as Democratic enthusiasm. Anyway, this is still an area where we need more improvement, but it’s a good start.

Second, take a look at the following numbers from the Research 2000 poll, indicating a major surge in support for Democrats and a sharp drop for Republicans over the past week.  For instance, President Obama is up 5 points, to 56%-39% (+17 points), while Congressional Republicans are down 7 points, to 21%-71% (-50 points). Also, the Democratic Party is up 3 points (to 40%-53%, or minus 13 points) while the Republicans are down 3 points (to 28%-67%, or minus 39 points), resulting in a 26-point favorable/unfavorable rating for the blue team over the red team. 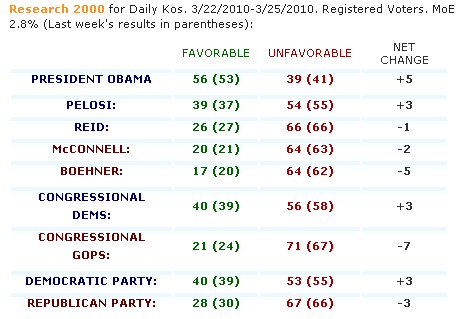 So much for the prediction that, if Democrats passed health care reform legislation, it would kill them at the polls.  In fact, it did the opposite. The implication is that passing more of what Democrats were explicitly elected to do in 2006 and 2008 is not a bad thing, it’s a very good thing both on policy terms and also politically. So, next up on the agenda: immigration reform, financial reform, clean energy/climate legislation. more on “jobsjobsjobs.”  Keep getting results, let the Republicans stay as the “hissy fit” Party of No, and we’ll see how it goes at the polls this November.  Yes, there’s a long time to go and these numbers could change (in either direction). For now, though, things are looking pretty good, especially considering the totally biased (towards Republicans and the “Tea Party”) news coverage we get from the corporate/right-wing media.

P.S. Also see the recent poll by Quinnipiac University, indicating that the presence of “Tea Party” candidates on the ballot this fall strongly benefits the Democrats. So, let’s hope for lots of those, in places like Virginia’s 5th CD and possibly other (1st? 10th?) CDs as well.