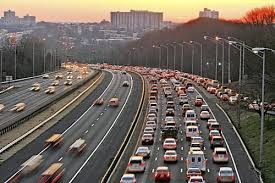 Press release from Rep. Moran’s office, this truly is a “nightmare.”

Caps parking at 1,000 spaces at BRAC facility to mitigate gridlock

WASHINGTON, D.C. – Congressman Jim Moran, Virginia Democrat and senior member of the Defense Appropriations Subcommittee, included language in the FY ’11 Defense Authorization bill which would cap the amount of available parking at the Washington Headquarters Service facility currently being constructed at the Mark Center in Alexandria (map) at 1,000 spaces. VDOT has projected that even with the current transportation management plan, I-395 and local roadways and intersections will experience failing levels of service that will heavily increase traffic during morning and evening rush hour.

“If nothing is done and the relocation continues as scheduled, VDOT has stated there will be ‘complete gridlock’ on Seminary Road and Beauregard Street and ‘severe’ congestion between the King Street and Duke Street exits on I-395,” said Moran.

The 2005 Base Realignment and Closure (BRAC) plan requires that 6,400 defense personnel currently working in Metro-accessible leased office space in Northern Virginia must move to the new Mark Center facility by September 2011.

The Moran language limits the number of cars commuting to and from the Mark Center by restricting the number of parking spaces that would be available for DoD use, as well as banning the lease of additional spaces in the immediate vicinity. “Our goal is to force the Army to put an effective transportation solution in place before the majority of workers are allowed in the building. Under the current plan, the traffic situation will be intolerable.”

Under the language, the DoD must first receive congressional approval for a detailed traffic management plan that would prevent service levels at six key intersections near the facility from being negatively affected.  Next, the DoD would be required to complete construction of the transportation improvements such as access roads and ramps before the parking cap is lifted.

The six intersections in question include:

(1) The intersection of Beauregard Street and Mark Center Drive.

(2) The intersection of Beauregard Street and Seminary Road.

(3) The intersection of Seminary Road and Mark Center Drive.

(4) The intersection of Seminary Road and the northbound entrance-ramp to I-395.

(5) The intersection of Seminary Road and the northbound exit-ramp from I-395.

(6) The intersection of Seminary Road and the southbound exit-ramp from I-395.

“The Pentagon dropped the ball on transportation planning for the base realignment at the Mark Center. A building of this size with no access to Metro should never have been considered at this location,” said Moran. “Now we’re pulling out all the stops to mitigate the consequences of the Defense Department’s mistakes.”

Moran and local officials in Alexandria and Fairfax County have called on the military to construct a direct access ramp to the Mark Center from I-395 to help alleviate some of the congestion.

The language was included in the FY’11 Defense Authorization bill which passed committee on Friday and is scheduled for consideration on the House floor this week.