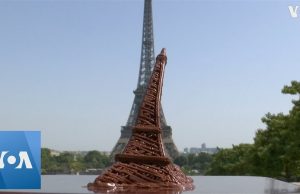 Friday News: With Europe in Record Heat Wave, “Why Are We...

lowkell - July 26, 2019 1
by Lowell Here are a few national and Virginia news headlines, political and otherwise, for Friday, July 26. ﻿ Flags of inconvenience: noose tightens around Iranian...

lowkell - June 24, 2019 4
I'm not sure what to make of this exactly (other than it's super weird), but check it out for yourself. Alexandria City Council member...

The crowd of Democrats competing for Jim Moran's House seat is growing faster than a herd of rabbits in spring.  Now up to eight, it may well, like the legendary stereo in the movie Spinal Tap, "go to eleven."

I see this as a good sign.  This field is a rainbow of talent, experience and diversity, a remarkable crew to see running in the former cradle of the Confederacy, as described by the Washington Post's Ben Pershing:

[A] half-dozen elected officials, three African Americans, two Latinos, a talk-show host, an openly gay state senator and a car dealer who last was on a ballot 17 years ago.

Okay, so maybe that sounds like the start of a bad joke that John Whitbeck would tell to warm up a Tea Party crowd.  But in a Democratic district like the 8th, it's a real opportunity to elect a new face with new ideas and experiences to represent NoVA in Congress -- an exciting prospect.

I can think of only one thing that could go wrong here -- and that's if the Dems in this very competitive field take the opportunity to tear each other to pieces. Doing so may not cost us this seat in a very Democratic district, but it could create scars that would hurt us in other ways -- and perhaps linger.

Great job by Rep. Jim Moran, his full statement is on the "flip." As Moran says, the Republican assault on federal workers is nothing more than "a cynical attempt to tap into misguided resentment fostered by the far right against the federal government and the 2.1 million men and women who serve our nation as civil servants." Thank you to Rep. Moran for calling them out on that!

P.S. It's speeches like this which demonstrate why Rep. Moran will be, and should be, reelected overwhelmingly this coming November.

Arlington County Board Race Kicks Off with Early Endorsement

With Senator-elect Barbara Favola set to head to Richmond, the Democratic primary race in the special election to fill her Arlington County Board seat is quickly heating up. Already announced:

Among those rumored to be considering a run:

So far, the biggest news in the campaign has been Rep. Jim Moran (D-8th) already endorsing Sims. To state the obvious, Jim Moran has been working his tail off for Northern Virginia since before your humble blogger was born and he does not need my or anyone else's permission to endorse whomever he pleases. But in conversations with Arlington progressive activists, I'm hearing less enthusiasm for this endorsement than I am questions about why Rep. Moran would not only take sides in a local Democratic primary, but do so even before the full field comes into focus.

Jim Moran: “It Gets Better”

These "It Gets Better" video series continues to amaze me. Here's Rep. Jim Moran's powerful, moving contribution. Personally, I hope some day to live in a world where "It Gets Better" videos aren't even necessary. To get to that point, unfortunately we'll have to overcome a lot of bigoted, intolerant people out there, several of whom are Republican candidates for President of the United States. It's very sad that in the year 2011 we're still at this point, but for whatever reason, progress seems to take a lot of time, as people don't give up their prejudices and ignorance easily. Some day, though, we'll win; I just hope it's sooner rather than later!

I just received this statement from Rep. Jim Moran. I think it's fair to say that most Blue Virginia readers strongly agree with what Rep. Moran has to say on this issue!

This deal is not representative of a balanced approach to long-term deficit reduction. By leaving revenue entirely off the table, the agreement severely restricts the government's ability to make investments in the human and physical capital of this country - investments that created the strongest middle class in the world and made our country the most powerful.

At a time of stagnant growth and high unemployment, the far-right of the Republican party has been able to hold our economic security hostage in exchange for deep cuts that will reduce growth and employment and increase inequality in the short term without properly addressing the structural causes behind our long-term deficits.

I first noticed Politifact was going out of its way to let Republicans rack up "trues" when they did an entire article crediting Rep. Eric Cantor for correctly saying 10,000 Baby Boomers a day are becoming eligible for Social Security & Medicare. I mean, is that the hot-button political dispute of the day in need of fact checking? Or an excuse to give an easy "true" to a guy who managed only 1 full truth in his first 11 fact-checks?

Rep. Jim Moran has fared just the opposite under Politifact's examination, rating 3 out of 4 "true" or "mostly true." Today, Politifact tries to bring him back into "balance" with a really weird "pants on fire." I say weird because ... well, what Rep. Moran said was at least half true. He said House Republicans had gleefully ordered biodegradable plates, trays & cutlery removed from the House cafeteria ... which they did. And he said they're using materials made by a Koch Industries subsidiary ... and while he got that wrong, it's actually a competitor, Koch does make the types of products in question.

Politifact giddily declares, "Moran must have been wearing a tin foil hat on the day he came up with this one." Sure, the Koch reference was sloppy (if pretty insignificant to warrant Politifact's pants conflagration). But Politifact is completely disingenuous to say Republicans didn't require a switch to plastic & styrofoam. Republicans wanted to stick a thumb in the eye of environmentalists & told the vendor to stop giving them all this nice, beneficial biodegradable stuff and switch to the cheapest crap possible.

Talk about going out of your way to absolve Republicans of responsibility for the consequences of their actions. I mean, if Republicans block an increase on the debt ceiling, will Politifact say, "Well, Republicans didn't require the Treasury to stop writing disability checks to wounded veterans & Social Security checks to seniors"? What's the point of having "fact-checkers" if you're going to play just as dumb as the talking heads chasing Sarah Palin?