(And while you are at it, ditto for Republican House Minority Leader John Boehner.)

Note: Hat-tip to Crooks and Liars. 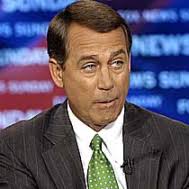 Good News! 3500 Philadelphians gave Peter Peterson the “what for.” By now, no doubt you have heard that Peter Peterson has made it his life’s mission to end Social Security, Medicare and any other program which is focused on helping citizens.  This former investment fund, corporate and government insider’s “solution” is pure disaster capitalism.  He’s also traveled the country raising money to squash ordinary Americans by persuading that the US should continue as the only industrialized country not offering national health care.  But now in the wake of health care reform, he’s back to his primary effort to end other programs, especially Social Security.

He wants the government to default on the money it has borrowed from the Social Security, in effect stiffing seniors (and all future seniors with money already paid into the system), while padding the profits of corporations.  You see, they do not want employees to have any mandatory benefits whatsoever. It’s bad enough many no longer offer pensions.  But now they don’t even want to pay the employers share of Social Security.  More profits for them.

In order to persuade us that the Peterson Poison Pill is good for us, Peterson’s got a Old Time Medicine Show er “America Speaks” tour, dispatched around the country.  These Lie-a-Paloozas are essentially propaganda fests designed to con Americans out of their safety net.  There are games, exercises , prizes and slick hosts to drill in the supposed data (propaganda).  But it turns out there are limits to the wool that can be pulled over voters’ eyes.  As Crooks and Liars reported the other day, 3,500 Philadelphians told Peterson’s con-squad to leave their Social Security alone, raise taxes on the rich, and cut the Pentagon budget.  Will wonders never cease!

Now its time to get the word further.  Peter Peterson is about one thing: Lining the pockets of Big Corporations, Big Oil and Big Insurance.  He’d rather fund endless war and obliterate everything else.  That’s the antithesis of what we need.  We do not need endless/useless wars (going nowhere and helping no one except contractors and minerals mining companies);  redundant weapons systems; and a fractured, deregulated economy which robs citizens of their hard earned money. Even as the investment world made the world less safe for investors, especially older Americans, Peterson tries to pull the rug out from under them completely.  According to a CNN Money story, forty-three % of American workers have $10 K (or less) in retirement savings.  Many of those having more have been hammered by Wall Street greed. The story for all but the gilded 1-2% is senior years with barely enough for housing, property taxes, food and medicine.  Even post health care reform, The Medicare donut hole will not be filled for years.  And yet, Congress, especially the GOP, fight any ability of the government to negotiate price.  The way Republicans disparage and condone the exploitation of seniors, it is a wonder any older voters actually vote for them. (I do realize Democrats also oppose price negotiation, but at least some of them get it.)  The free-for-all corporate exploitation of Americans continues.

Finally, today, the Man with the Tan Boehner, empty vessel that he is, announced his so-called plan.  Here’s the Boehner Plan.  It’s war without end and steal from Social Security to pay for it.  While you are telling Peter Peterson to stuff it, tell John Boehner that he can take a flying leap.  BTW, he wants people to work till they are at least 70.  Show us jobs!

Video, Live Blog: Tonight’s (First) Virginia Gubernatorial Debate Between Terry McAuliffe and Glenn Youngkin (The debate is being hosted by the Appalachian School of Law in Grundy and moderated by Susan Page of USA Today) https://bluevirginia.us/2021/09/video-links-to-watch-thursday-nights-first-virginia-gubernatorial-debate-between-terry-mcauliffe-and-glenn-youngkin