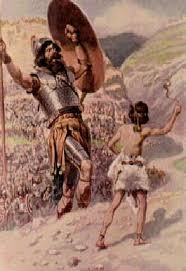 During the 2008 general election, we had our very own “David” and Goliath” contest.  Unlike the more biblical meeting of the duo, when Goliath, the Philistine giant, lost to a much smaller David, the 2008 match-up went badly for David.  Just this week, though, our 21st Century “David” verbally took on “Goliath,” SW Virginia’s very own Philistine, again.  And this time, it was a smack-down of a different sort, with a different winner and loser.

In his letter to the editor to the Roanoke Times here, Carter Turner called out Morgan the Carpetbagger for his hypocrisy on the subject of residence:


Speaking to a Roanoke Times reporter last fall, Griffith stated that I was less qualified to represent the people of Salem and Roanoke County because I had only recently moved to the district. Despite the fact that I grew up in the district and had lived there for the previous two years, Griffith claimed I lacked knowledge of the particular needs of the people I’d be representing – knowledge gained only by living and working within the district for many years.  “Being a product of the district,” Griffith told the Times “… helps me understand where constituents will be on an issue. I’ve operated a business here on Main Street for 25 years [and] that gives me a feel for the community.” So last fall, Griffith tried to convince voters he was more qualified because he had lived in the 8th House of Delegates District longer than I. Eight months later, he is trying to convince voters that his failure to live even a day in the 9th Congressional District is completely irrelevant.

Now we are to believe that Morgan Griffith, who not only doesn’t live here, but who has never done a thing for the 9th District, should represent us?

Say after me, Morgan Griffith is a:

There is much more to say about how bad a choice Morgan Griffith would be for the 9th.  This is only the beginning. Stay tuned…