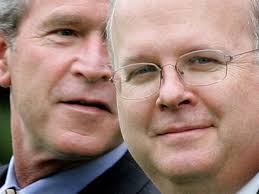 If you don’t have dinner plans next week, here are a couple of great ideas for you.

First, you can enjoy a lovely soiree with Bob McDonnell, John McCain and Fred Malek. Maybe they’ll talk about this or this while they’re dining on…this, perhaps?  And all for just $2,400 (or more, if you so desire).  Sounds like a fun time — or, on second thought, not!

Second, if that’s not enough right-wing fun for you, there’s always this event, which looks like a barrel of laffs!

Karl Rove, the man once known as George W. Bush’s brain, is coming to Virginia for a fundraiser for the state Republican party.

Party officials expect as many as 300 people to donate up to $60,000. The June 15 event will be in McLean, but the party isn’t releasing the location of the house just yet. Could the party be worried about protesters?

Rove, who just released a new book Courage and Consequence: My Life as a Conservative in the Fight, will be joined by Attorney General Ken Cuccinelli and party Chairman Pat Mullins.

In case you attend, here are a few talking points about Rove.

*”In the fall of 1970, Rove used a false identity to enter the campaign office of Democrat Alan J. Dixon, who was running for Treasurer of Illinois. He stole 1000 sheets of paper with campaign letterhead, printed fake campaign rally fliers promising ‘free beer, free food, girls and a good time for nothing’, and distributed them at rock concerts and homeless shelters, with the effect of disrupting Dixon’s rally.”

*Rove’s campaign for national chairman of the College Republicans was run by none other than the infamous Lee Atwater, of the infamous “Southern strategy”.  In 1981, Atwater explained this strategy, saying, “‘We want to cut this,’ is much more abstract than even the busing thing, and a hell of a lot more abstract than ‘Nigger, nigger.'”

*”Rove was fired from the 1992 Bush presidential campaign after he planted a negative story with columnist Robert Novak about dissatisfaction with campaign fundraising chief Robert Mosbacher Jr. ”

*”Rove has been accused of using the push poll technique to call voters to ask such things as whether people would be “more or less likely to vote for Governor Richards if [they] knew her staff is dominated by lesbians.”

*And, of course, there’s the Valerie Plame scandal. In 2005, “it was revealed that Rove was Novak’s second Bush administration source” for outing a covert CIA officer.

In other words, there should be lots to talk about if you decide to attend this dinner. Bon appetit! 🙂

UPDATE: Wow, check this audio out.