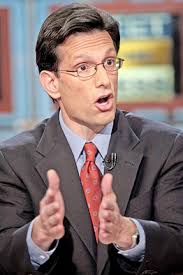 Can we say shameless hypocrisy?

House Minority Whip Rep. Eric Cantor (R-VA) has been one of the Recovery Act’s most vocal critics. After whipping his caucus into uniformly opposing the stimulus, Cantor has been the lead spokesman decrying the program as a failure. Ignoring evidence that that the stimulus is helping to turn around the economy, Cantor repeatedly says that it is “failing” to “create jobs.”

As ThinkProgress reported last year, despite his withering attacks on the stimulus, Cantor hosted two job fairs filled with employers hiring directly because of stimulus grants and programs. Tomorrow, Cantor intends to again host a job fair stimulated by jobs made possible through the Recovery Act

Elizabeth Guzman Files for Lt. Governor With More Than Twice the Required Number of Signatures https://bluevirginia.us/2021/03/monday-news-meghan-accuses-uk-royals-of-racism-bidens-giant-stimulus-to-easily-pass-house-on-tuesday-manchin-wants-to-make-filibuster-painful-to-use-gov-nor#comment-5296309918

From @JennMcClellanVA's spokesperson, re: whether anyone was "first" in filing to get on the June 8th Dem primary ballot https://bluevirginia.us/2021/03/monday-news-meghan-accuses-uk-royals-of-racism-bidens-giant-stimulus-to-easily-pass-house-on-tuesday-manchin-wants-to-make-filibuster-painful-to-use-gov-nor#comment-5296291226