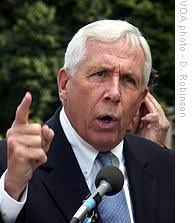 Frank Wolf figuratively took the air out of Bobby McDonnell’s ambitions of increased privatization in Virginia, in this case privatization of our infrastructure.  Here’s the article from WTOP.

It seems that Congressman Wolf, who just this once, makes sense, sent a letter to State Transportation Secretary, Sean Connaughton, which can be read here, urging reforms.  The Congressman, expressed his strong opposition to the ever-increasing tolls on the Dulles Greenway. Calling the tolls essentially “highway robbery, Wolf called for action. Just what many of us have been saying. Wolf also said:

“The Greenway is perhaps the most expensive toll road per mile in the country. This is a quality of life issue for those people living along the Greenway or who use it on a daily basis.”

Then we read something which is no surprise to NOVA drivers, but may floor those from the rest of the state:


Base tolls go as high as $4.50 per trip. Combined with the Dulles Toll Road, some drivers are paying $10.50 a day on tolls. Wolf says people who pay these maximum tolls are spending as much money to use the road as they would spend on a monthly car payment.

Wolf wants clear signs about the actual cost of using that highway before drivers enter the road and he wants a citizens’ panel to work on solutions for making the toll road more user-friendly.

That would be nice. I might add: Too bad the highway was sold off to Australian commercial interests.  They’ll have no interest in either listening or making the improvements any of us call for.

The privateers keep recommending more private roads in Virginia. Given Virginia Republicans’ penchant for dynamiting transportation funding, what’s a state to do?  With even a Republican taking aim at one of those “free marketer” extremist ideas, albeit only partially, certainly, it’s clear that more privatization isn’t the answer. Additionally, Wolf should look at the core problem, which goes way beyond pricing and user friendliness:  Critical infrastructure should not be privatized.  Still, I love it when Republicans make our point for us.  Don’t you?

Just do the polar opposite of whatever the far-right "Middle Resolution" PAC recommends...including voting for Joe Biden/Kamala Harris, Mark Warner, the Dem for US House, and NO on Amendment 1. https://bluevirginia.us/2020/10/thursday-news-moderna-ceo-says-its-coronavirus-vaccine-wont-be-ready-until-spring-of-next-year-trump-backs-violent-white-supremacists-theres-no-way-around-it-the-family-is-wo#comment-5092638410

As of 9/30, Virginians had cast nearly 1/2 a million votes already! (285,805 in person; 196,869 by mail). The "blue" 8th, 10th, & 11th CDs remain way in front in "mail and in-person ballots cast so far, as well as outstanding mail ballot applications." https://bluevirginia.us/2020/10/thursday-news-moderna-ceo-says-its-coronavirus-vaccine-wont-be-ready-until-spring-of-next-year-trump-backs-violent-white-supremacists-theres-no-way-around-it-the-family-is-wo#comment-5092635437